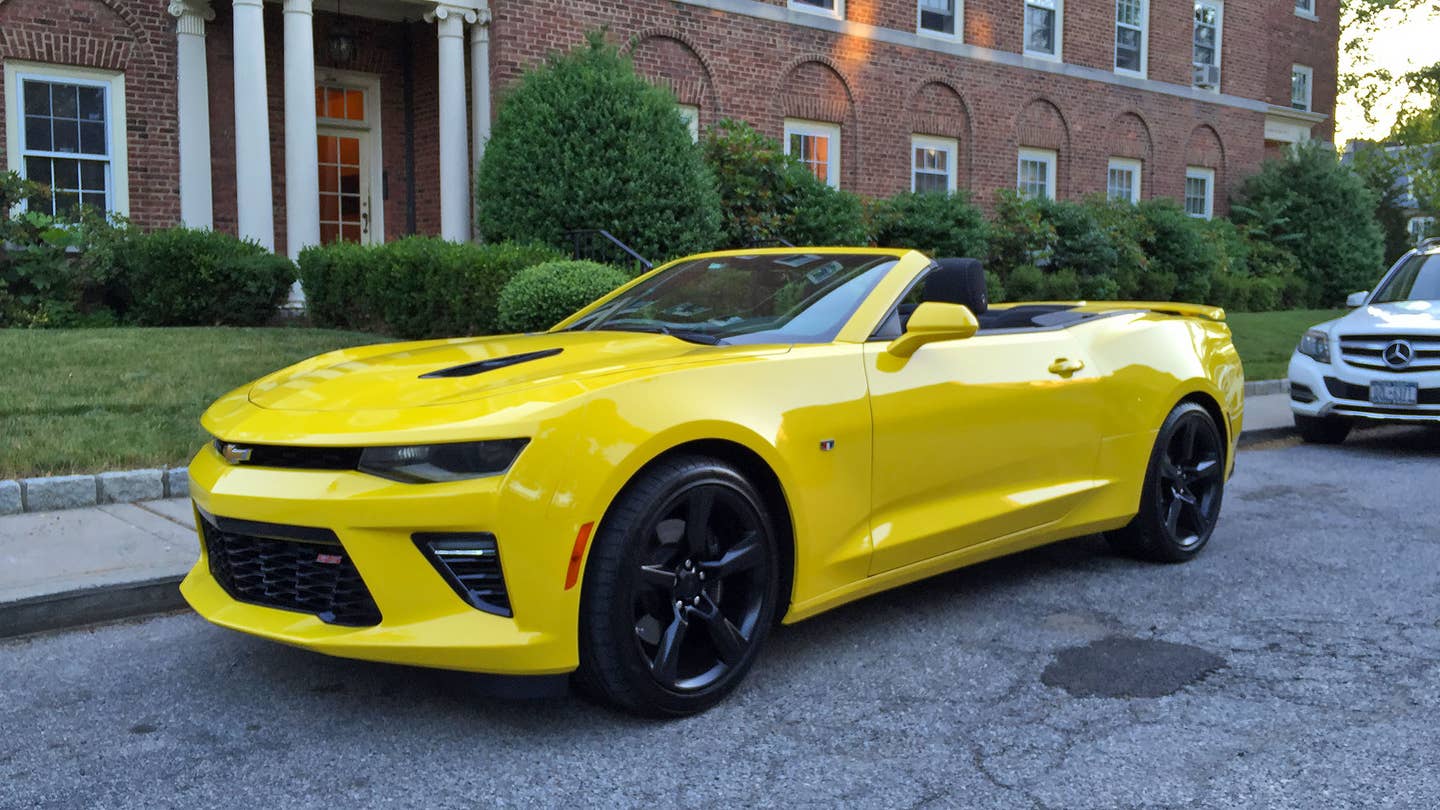 Welcome to Critic's Notebook, a quick and off-the-cuff collection of impressions, jottings, and marginalia on whatever The Drive writers happen to be driving. Today's edition: the 2017 Chevrolet Camaro SS Convertible.

The 2017 Chevrolet Camaro SS Convertible demands your participation in the world—it goads you into a neon Speedo and then hip-checks you into the pool. It shoves you out onto the streamer-framed dance floor at junior prom, even if you’re still munching Cheetos and contemplating a scientifically-unprecedented act of self-dissipation. The Camaro SS Convertible, especially lacquered in Yellow (do not be fooled by Chevy’s mellow, saffron-y pictures, the color is School Bus Yellow backlit by Julia Roberts’ grin) serves its driver up to other motorists like a sheepish suckling pig on a lurid platter. But the driver, unlike the hog, will be living, thriving, and alert, with just a light shellacking of bug guts across the forehead rather than a honey glaze.

It’s pure spectacle, a V8 Sousaphone over 20-inch wheels that only knows how to play fanfares. The cadmium yellow glow draws gawkers like the insects to a porchlight. Putting the top down waives any right to privacy. One Rolls-Royce convertible aside, never have I felt so transformed into a curious morsel for public consumption; even the usually car-blind hunger for dollops of meaty ‘Maro

While I’m sure it can be done under the influence of six or seven Gennessee Cream Ales, or after a vigorous day in the mines, it seems nearly impossible to fall asleep at the wheel of a six-speed-equipped Camaro SS Convertible. Between the shifting and the accelerating and the manic braking because you’ve accelerated too quickly—all to a V8 soundtrack tuned to emulate the Lord’s chuckle—driving the Camaro Convertible is a four-limbed hustle. To slip into sleep during such an activity would be like dozing off during the finale of your solo tap routine, thighs and hands wind-milling.

If you get the impression that driving such a charismatic speedboat is stressful, it is, at least in New York City, where I drove the car. Not only can the big motor not stretch its legs, in traffic it’s bound to an uncomfortable shuffle, a sprinter asked to complete a series of 50 two-meter sprints rather than his 100-yard gallop. Looking to do the sports car justice, I drove it to the beach; speeding along a causeway with the roof down and the engine sounding a barbaric yowl is a favorite car memory. Then, we arrived at the beach to find almost no parking. Driving around a twee beach town trying to squeeze two tons of yellow muscle car into remnants of parking spaces—the engine yelping as I feathered the throttle, trying to go slow—felt like walking Big Bird on a leash through a funeral.

As glorious and fast and nimble as the new Camaro is—in fact, exactly because it’s so dynamic—it belongs in the country. A lower population density would mean a just-bearable number of stares, and the open road would allow the kind of long-pull, high-gear acceleration that the Camaro is built for. Pulling up to a party on the outskirts of town, cruising to get ice cream with three passengers, or bombing down a mountain road—these are the things the Camaro wants to do. Bill De Blasio would agree: horses this noble don’t belong in the city, subject to traffic and nervous of trampling pedestrians.

While America has always provided relatively cheap cars, it has also always provided value. (See: Top-spec Eighties Camaros with poverty-spec outputs.) But today, post-Bailout? The price-per-pound is staggering. You can walk out the door with a burly V8 coupe with Magnetic Ride Control for well under $40,000—this, at a time when an utterly option-less BMW 328i lists for $39,345. The moment I give up on urban life, I know exactly the righteous, sun-bright sled to buy.