Will Sabel Courtney and Sean Evans face off over which 2016 Alpha platform sports car reigns supreme. 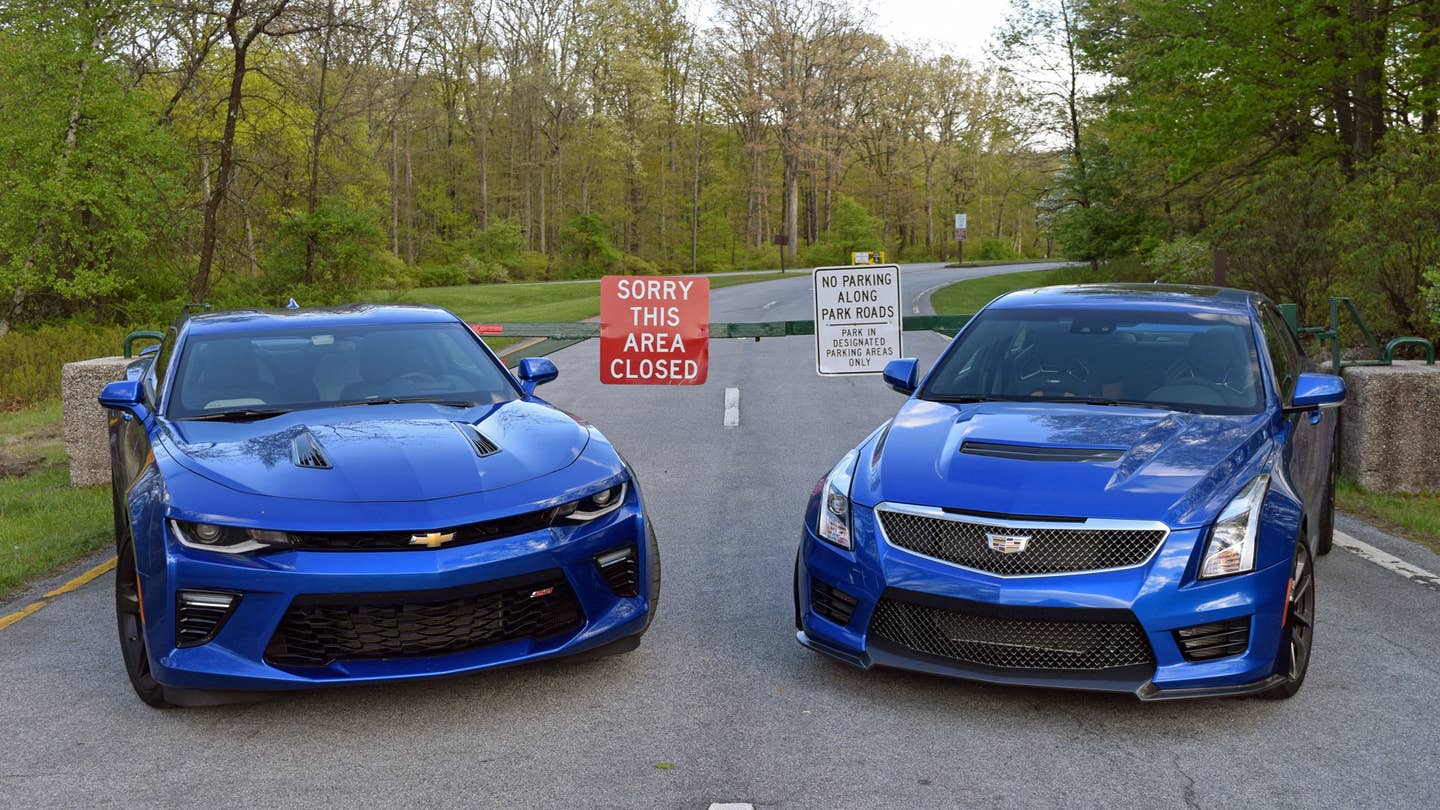 Recently, two staffers at The Drive—Will Sabel Courtney and Sean Evans—found themselves driving the 2016 Chevrolet Camaro SS and the 2016 Cadillac ATS-V on the same weekend. Both cars are based on General Motors' excellent Alpha platform. Both make roughly the same amount of power. Both came with six-speed manual gearboxes. And, oddly enough, both wore the same shade of blue paint.

So they met up. They drove both cars back-to-back on the same stretch of roads. They each came away with their own stubborn, pig-headed opinions. And they each brought those options back to the office, where they vented them at one another via the online messaging platform Slack.

The following is a transcript of that debate.

WSC: You had the Camaro SS last weekend, and I had the ATS-V.

SE: Yes, I had the superior car.

SE: What about it?

WSC: As my car was clearly better.

WSC: The ATS-V is faster, first of all, as we clearly proved.

SE: The only thing we proved was that you had launch control and I did not.

WSC: Well, that, and you don't know how to launch a car off the line.

SE: But you have two turbos.

SE: I had zero turbos.

WSC: But you have mad displacement.

WSC: And like your mom said last night, there is no replacement for displacement.

SE: Right. So you have a smaller, more powerful engine, and it's a slightly SLIGHTLY faster car

SE: but the Camaro is undoubtedly louder and scares the children and therefore is more fun.

WSC: It also handles better, because of that smaller engine.

SE: Disagree. I like how slippy the Camaro was.

WSC: Oh, the Camaro is definitely more fun to hoon around.

SE: Besides, that's the same LT from the Corvette.

SE: so you can keep your tiny engine, your alleged better handling and your marginally faster car

SE: particularly because it costs, what $30K more?

SE: how expensive was yours?

WSC: I plead the Fifth on that one.

WSC: /gif i plead the fifth

SE: and what do you get for all that?

WSC: BUT that was with a bunch of unnecessary accoutrements like the Carbon Fiber Package.

WSC: And that's with all the tasty performance treats.

SE: Still 14K over the Camaro

WSC: The Caddy's interior alone is worth at least half of that $14K.

SE: I don't need any of that nonsense.

SE: I need power and noise.

WSC: The Camaro is a fun goofy car to play around in. But the Cadillac manages to be a better sports car AND a better car in general.

SE: It absolutely does not manage to be a better sports car.

SE: no one stares at it.

WSC: STARES DO NOT A SPORTS CAR MAKE

WSC: SPORTINESS IS WHAT MAKES A SPORTS CAR

SE: that's a hallmark of a sports car.

WSC: You're a hallmark of a sports car.

WSC: that is accurate.

SE: But getting back to the basics. We went to Bear Mountain, right?

SE: with all it's wonderful, twisty roads

SE: You led in the Caddy

SE: and couldn't pull away at all.

SE: The Camaro was right on your tail the whole time.

WSC: They're more or less evenly matched in terms of speed

WSC: But the ATS-V is better balanced.

WSC: Your rear end was dancing all over the road as you went through those turns.

SE: Okay, which car do I want to track? The Caddy.

SE: Which car would I daily? The Camaro.

SE: I liked that the back end steps out a bit.

SE: that's why you buy a Camaro.

SE: that's why you want a muscle car.

SE: you want the loud and the horror show (and tire smoke)

WSC: But my biggest real beef with the Camaro?

WSC: You can't see out of the bastard.

WSC: I felt like I was driving a Civil War pillbox.

SE: They need to address that.

WSC: Those front corners could hide a black bear.

SE: and you could also have one chasing you and never know it because of the tiny rear window

WSC: "The 2016 Chevrolet Camaro: Not Great Against Bears"

SE: on the Alpha platform.

SE: Okay so which is which, smart guy? On three...

SE: The Camaro is the Dragon

WSC: Dragon is the Camaro

SE: I feel like the Camaro is the older brother who is proficient with a noogie and may give you a swirlie and burps a lot after guzzling soda.

SE: but he's strong, and funny and you always want him around.

WSC: And the ATS-V is the younger brother who had a lot to prove, so he cleaned up his act, hit the gym, and got a really good job.

WSC: I refuse to address any Supernatural gifs.

SE: That you know where that's from is even sadder

SE: So what's the conclusion

SE: I'm right? You're wrong? The Camaro is better?

WSC: Point still stands. The ATS-V is the superior car, in my mind. But the price difference is high enough that it's hard to compare them apples-to-apples.

SE: I will get a bag of apples, get in the Camaro, drift around your ATS-V and throw said apples at you.

WSC: Because of the aforementioned shitty sight lines.