And wearing the skimpiest of lingerie, no less. 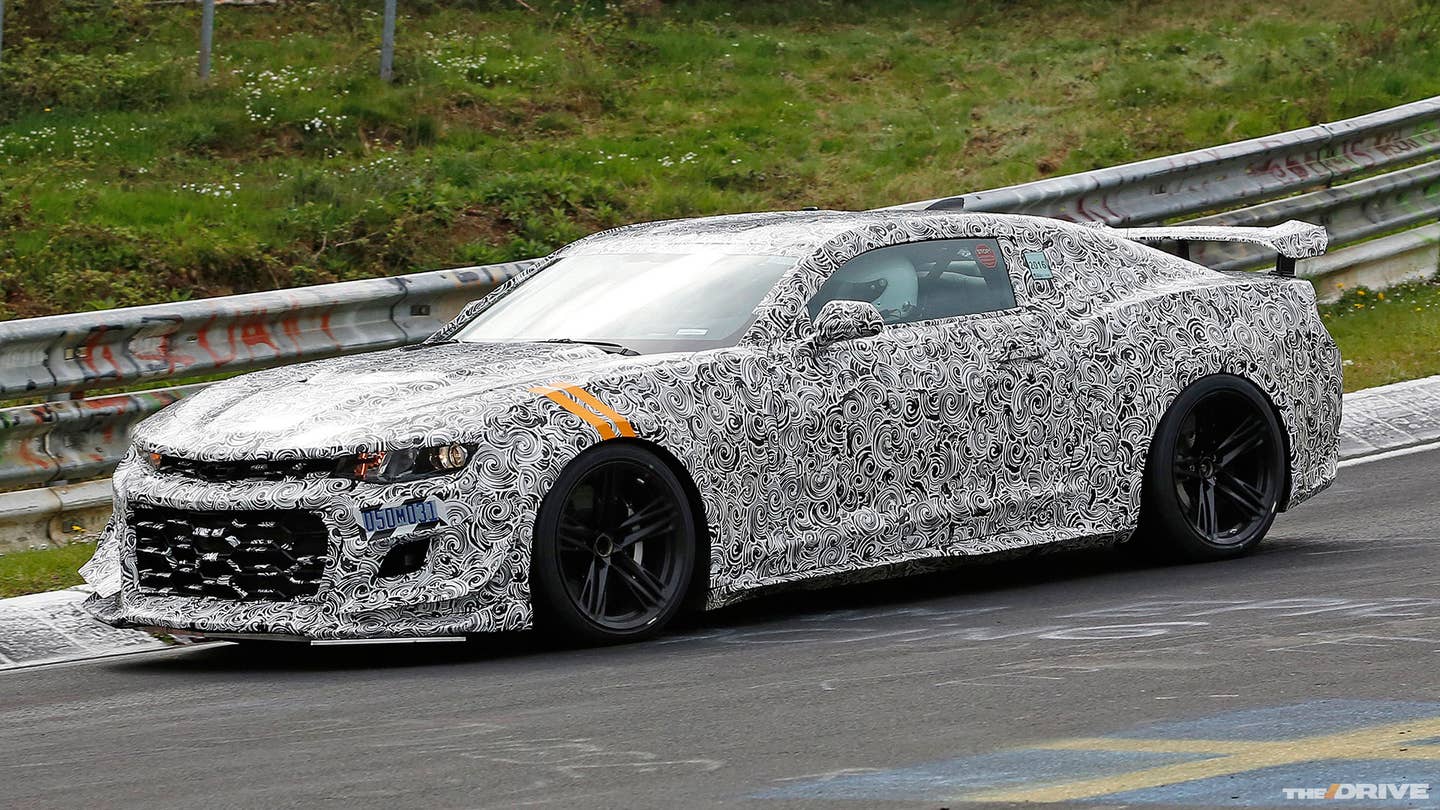 We all knew the 2018 Chevrolet Camaro Z/28 was coming. GM may have been cagey about it, but deep in our hearts, we knew. Apparently, Chevy doesn't see the point in hiding it any longer, because a car that could only be a brand new Camaro Z/28 has been caught dashing around the Nürburgring Nordschleife in the automotive-camouflage equivalent of a peignoir.

Even that distracting pattern of Van Gogh swirls isn't enough to hide most of the details of this all-American track rat. The front fascia boasts a massive intake, capable of supplying hundreds of hungry horses with all the oxygen they need. Aerodynamic elements that resemble the canards of a Eurofighter Typhoon jut from the front corners, directing air flow away from the car's sharp angles. The bulging hood looks like it was pulled straight from the assembly line for the 640-horsepower ZL1. The rims are mighty, wheel-well-filling alloys shrink-wrapped in thick rubber bands masquerading as tires. Quad pipes, stained by heat, jut from the bulging rear bumper. And an adjustable wing towers above the trunk, pushing the Camaro's ass end down towards the pavement as speed rises. (Editor's note: We made WSC take a short break after writing this to settle down, because his weird panting noises were becoming distracting. And we took away all of his Danielle Steel romance novels.)

Revealing as these pictures are, there's one key detail they don't disclose: the engine beneath that sculpted hood. There's an untraceable rumor roaming around the internet that the next Camaro Z/28 will switch to twin-turbo V6 power, but considering the Camaro faithful would storm the Renn Center with pitchforks and torches if Chevy offered the top-of-the-line muscle car with anything other than a V8, that seems unlikely. We expect to find no fewer than eight cylinders powering the maximum 'Maro; since GM is still cranking out the lustworthy 7.0-liter LS7 at its General Motors Performance Build Center plant, we're guessing (well, hoping) the Z/28 sticks with that.

No matter what powers it, there's little doubt the new Camaro Z/28 will be an absolute monster on both track and road alike—and we look forward to finding out just how much of a monster it is in person. Considering how complete this prototype looks, we're guessing we'll know sometime in 2017.