2018 Royal Enfield Himalayan, By the Numbers

Quick Take: Royal Enfield's middleweight adventure bike is a bunch of fun and has gobs of character, but it could use another cylinder.

When we first laid eyes on the Royal Enfield Himalayan adventure bike back in early 2016, our fingers were firmly crossed that this small, affordable scamp would come to America. Royal Enfield is a hot brand in India where it’s seen massive success with light- and middle-weight bikes and it’s been attempting a comeback stateside of late.

Part of that comeback is an attempt to cash in on the growing adventure bike trend by giving the U.S. its most affordable entry into the popular segment. Adventure bikes are great, but they’ve gotten a little ridiculous. A lot of them are mighty expensive coming from premium brands like BMW and Triumph. By contrast, The Himalayan, has just one cylinder, weighs only 401 pounds, and starts at under $4,500.

So, how does the Himalayan compare to bigger, stronger, more expensive competitors?

The Himalayan doesn’t look like a traditional Royal Enfield, which I think is a good thing. It would’ve been easy for RE to make its adventure bike a Triumph Scrambler knockoff by putting some knobby tires and skid plates on a Classic 500. But that would’ve been too easy. Instead, the Himalayan is a clean sheet design and it looks like a real, honest-to-God adventure bike with less plastic and, in my opinion, more character than its bigger, more expensive competitors.

It’s got a tall ride height that’s tall enough for my six-foot self to do a little hop when saddling up. It’s one of those things that’s tricky the first couple times but quickly becomes second nature. The riding position is very neutral making it comfortable both on-road and off (more on that later). The dual front fenders, little windshield, upswept exhaust, skid plates, and cool “Himalayan” badging all over make for a unique, decidedly adventurous look.

The gauge cluster is stylish, functional, and blessedly analog. This little dash has everything; speedometer, tachometer, clock, gear indicator, fuel gauge, and even a compass. The compass might be a little gimmicky, but I think it’s cool. Overall the layout is clear, easy to use, and not too cluttered.

The Himalayan is powered by a single-cylinder 411cc four-stroke engine that makes 24.5 horsepower and 23 ft-lb of torque. Yes, those numbers are pretty low, but not bad for a sub-500cc one-lunger. It pulls pretty well on the low-end thanks to a nice long stroke and an overhead cam. It’s when it gets up to higher speeds that it starts to struggle.

This motor will take you to 75 mph and it will hold you there comfortably, but it doesn’t like going much faster than that. For real long-distance adventures, you might want to look to some of the bigger names in this segment. The Himalayan is certainly capable of touring, but don’t plan on doing a lot of passing on the highway.

Personally, I think the Himalayan could use another cylinder. If it had just a little bit more oomph, it would add a lot to its versatility. Royal Enfield has a new 650cc parallel twin coming out and I really hope that engine makes it to the Himalayan. A twin would make it a much better highway cruiser without compromising its convenience in the city or its abilities off-road.

The Himalayan is a pretty strong city bike. It has the low-end torque to get up and go at traffic lights and despite only having one cylinder, it never feels too slow in the city. It’s also light enough to whip around in traffic with ease and quick lane changes are a breeze.

Despite its limitations in terms of raw speed, it’s more comfortable than you might think on the highway. That little windshield does more than I expected it to in keeping the wind off my chest and the neutral riding position was all-day comfortable. It was generally a lot smoother than a bike this size and this price has any right to be at any speed, partially thanks to the counter-balanced three-piece crankshaft.

The bike I tested was equipped with optional locking and removable 26-liter panniers, which I would definitely go for if I were to buy one of these myself. Having storage on the bike makes it that much more versatile and I just think they look cool. They’d look even better with “THE /DRIVE” stickers all over them—but I didn’t think RE would agree, so I refrained from decorating the boxes.

I must admit, I didn’t get to do a whole lot of off-roading in the time I had with the Himalayan, but what I did experience made me wish for more. There’s a beautiful highway in the Northwoods of Wisconsin that has several ATV and dirt bike trails shooting off of it. I had a lot of fun enjoying the winding pavement of Highway 55 and, when I felt like it, deviating from the highway and taking a little jaunt off road.

The Himalayan is heavier than most proper dirt bikes and lighter than most adventure bikes. It would be nice if it was a little lighter, but it was still easy enough to be easy to handle in the dirt, sand, and grass. The knobby, dual sport Pirelli tires were excellent, not too rough or noisy on road and perfectly capable in light to moderate off-roading.

I tend to judge any off-roader by how easy it is to make a save when it feels like you’re going to lose it, and how easy it is to get back in the saddle when you do lose it. Being a press unit, I didn’t want to push it too hard and I managed to not lay the thing down while getting adventurous. If I did, however, I’m pretty confident it would be easy enough to get back on its feet with minimal damage thanks to the crash bars all over the bike.

I can, however, speak to how easy it is to save when you think you’re going to lose it. If you feel it starting to get to an uncomfortable angle, just flick the thing back upright or stick your foot out and you’re golden. The Himalayan feels like it wants to have fun and not crash just as much as you do.

“How much does this thing cost?”

I cannot tell you how many times I had this conversation while I had the Himalayan. Every time I told someone the MSRP of this bike, they repeated it back to me with exclamation and disbelief. Bystanders can’t believe how affordable this bike is and riding it makes its low cost of entry even harder to believe. It’s priced like an entry-level motorcycle, but it looks and rides like something more expensive. “Premium” isn’t the right word, it just feels like it would cost a lot more than four and a half grand.

For all of its versatility, the value proposition might be the Himalayan’s strongest quality. If you want a cheap street bike that’s a little more interesting than something like a Honda Rebel, you should seriously consider this Royal. If you want an adventure bike but don’t have the budget for a Multistrada, here’s your answer to affordable fun on-road and off.

The Royal Enfield Himalayan is a fantastic little adventure bike when you take a step back and consider what it is. If you ride a Himalayan expecting it to be like a Triumph Tiger, but smaller and cheaper, you’ll probably be disappointed. If you saddle up expecting a fun little bike for the dirt or the street that isn’t very fancy but also isn't very expensive, you won’t be able to stop smiling on the Himalayan.

To me, an adventure bike is about two things: capability and versatility. It needs to be capable both on and off the beaten path, and the Himalayan has both of these qualities in spades. Whenever I took it off-road, I never felt like I was pushing it beyond its limit; it always wanted me to go a little farther and push a little harder, but my caution got the best of me. As for a street bike, I would gladly use this as a city bike and for occasional and/or brief highway runs. 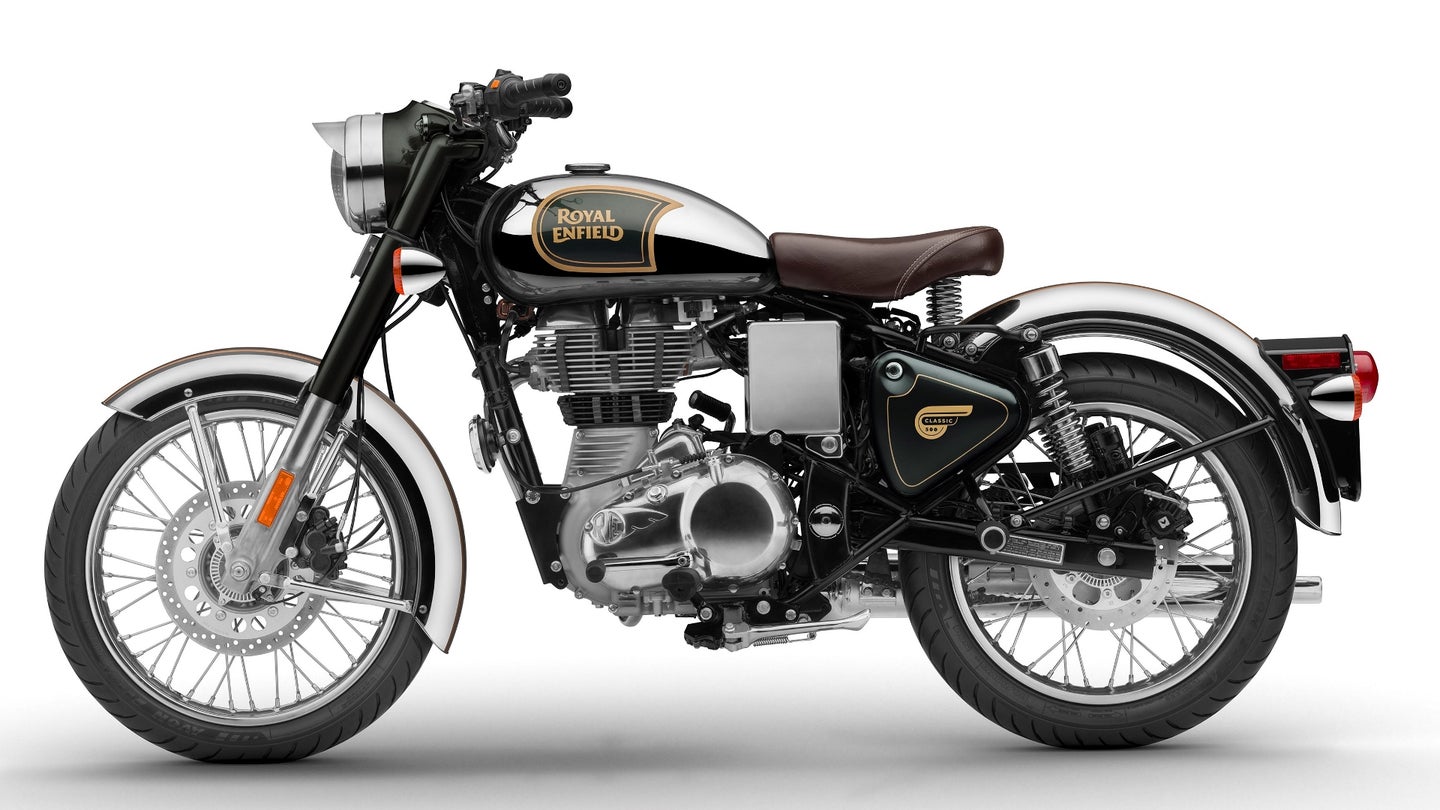 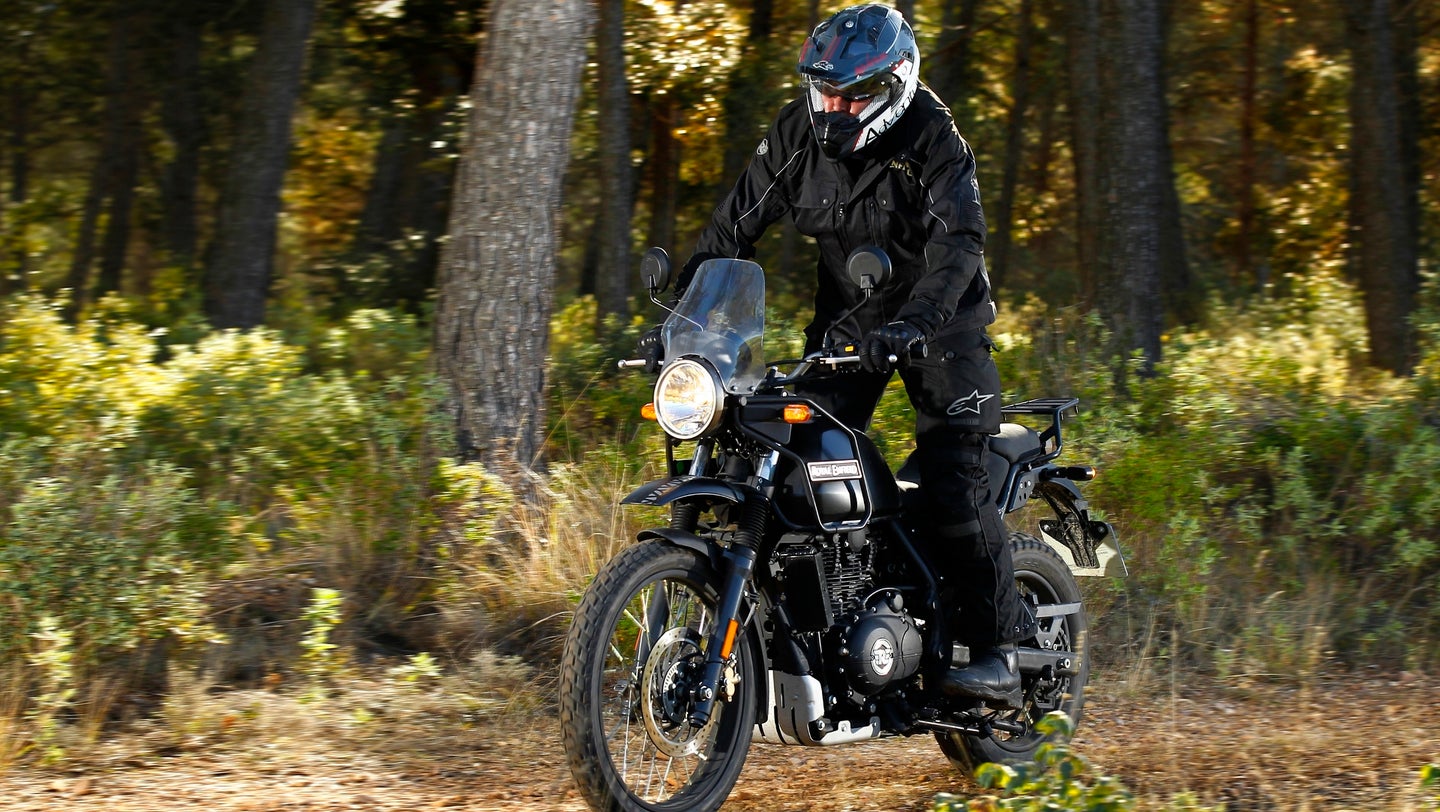 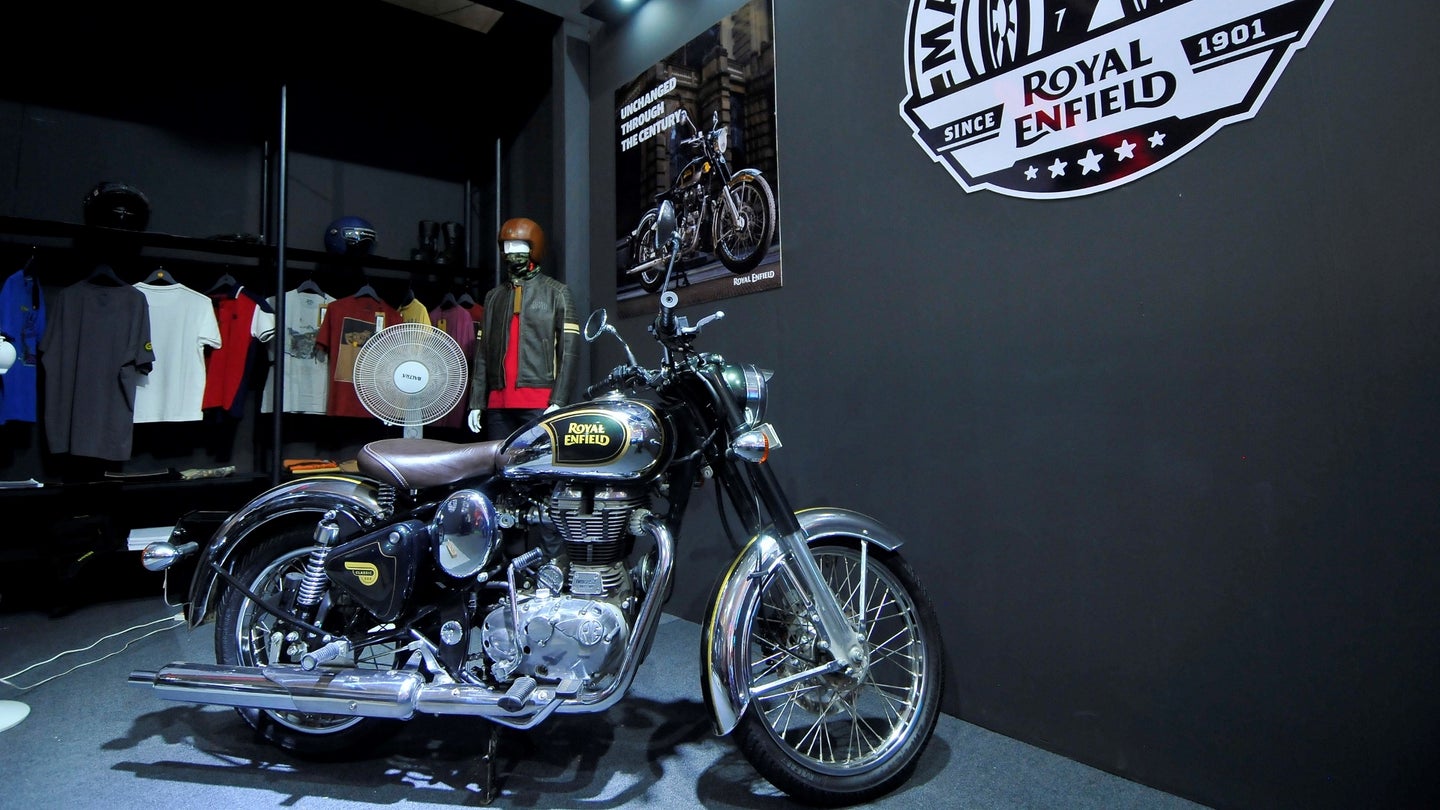 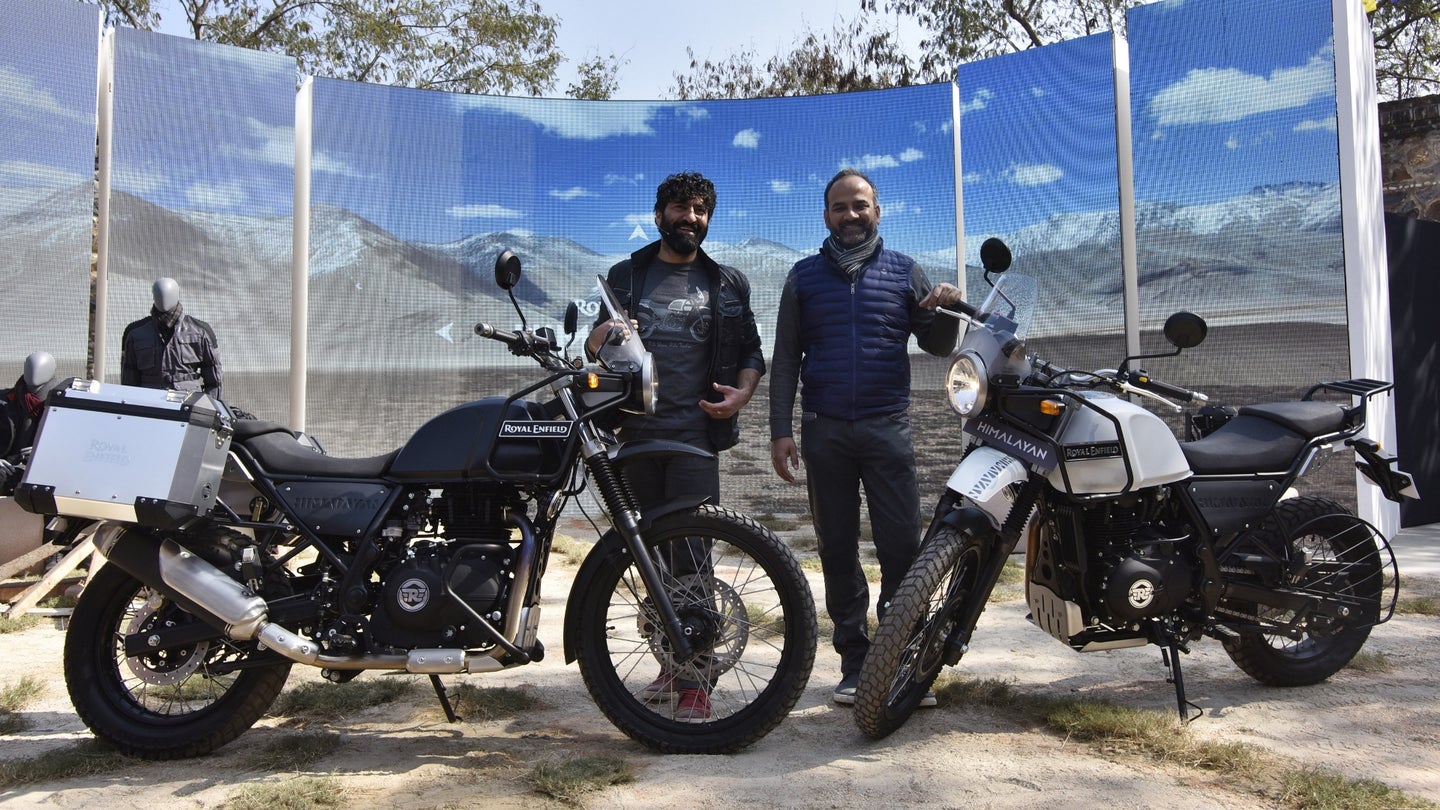 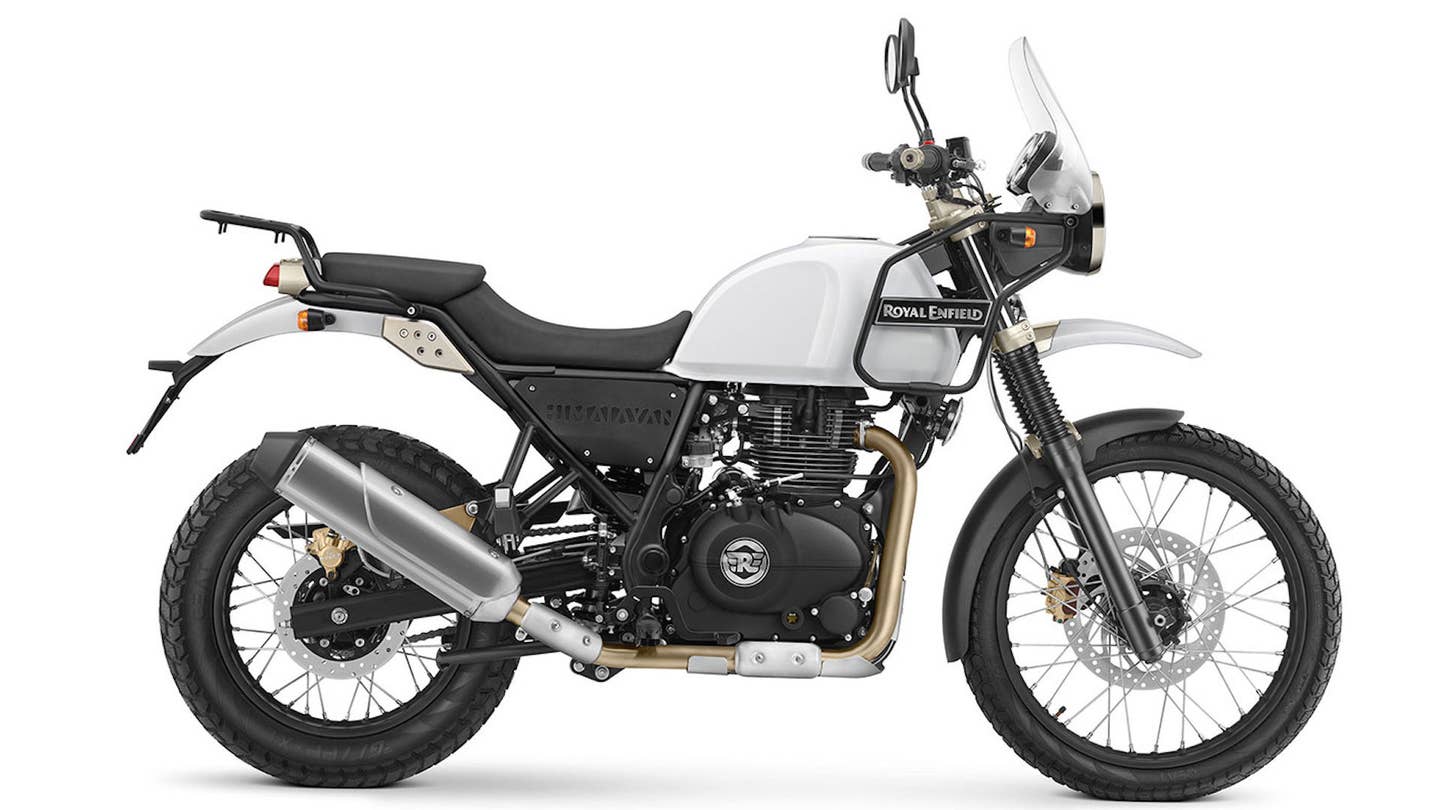