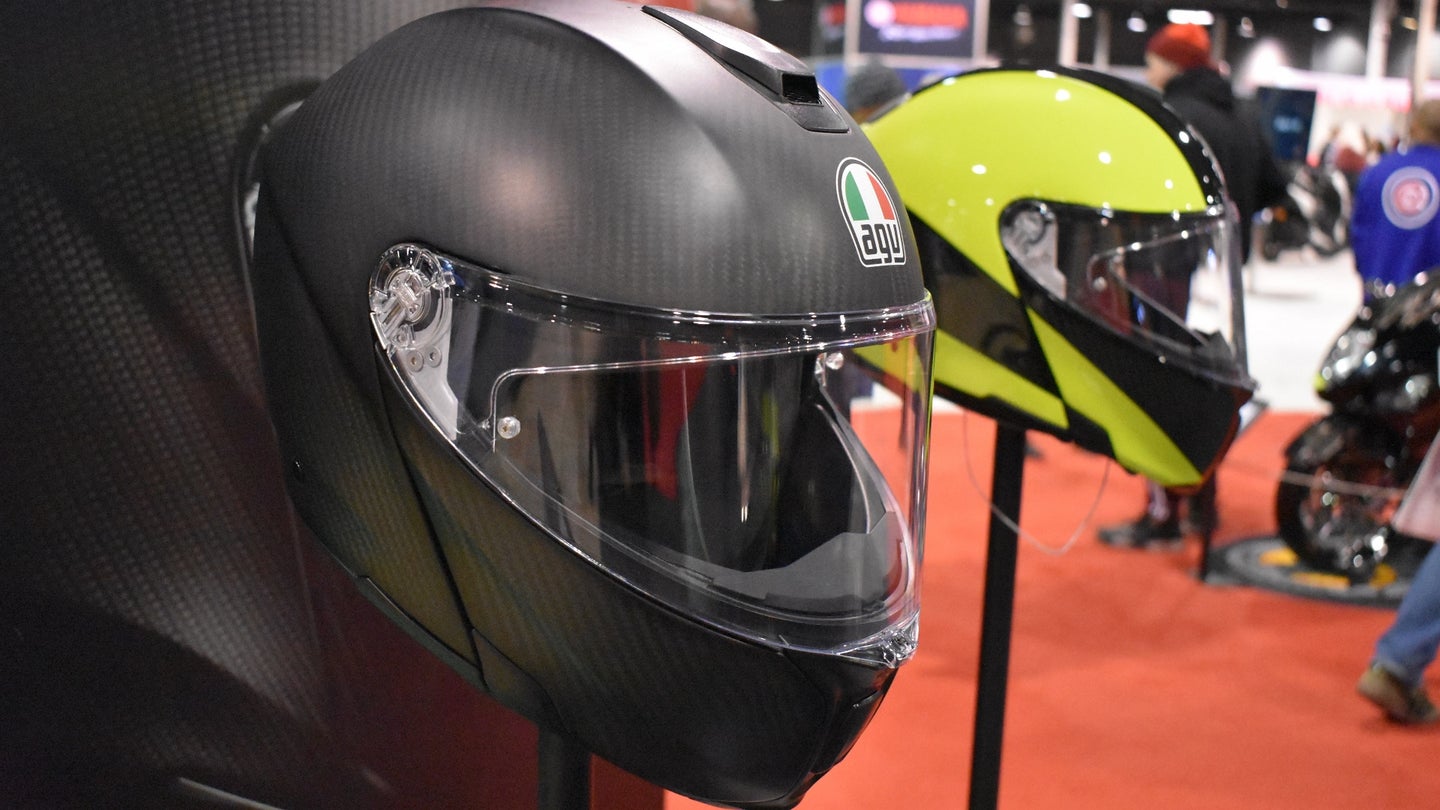 Located right near the middle of the show floor at the IMS Chicago Motorcycle Show was the display for Dainese and its subsidiary helmet brand AGV. The Italian helmet brand most famously protects Valentino Rossi’s head in every race, but AGV makes a lot more than just racing helmets. I spoke with Dainese/AGV Marketing Director Peter Bacon about what’s new for AGV in 2018.

“We offer a full line of helmets. What that means is we cater to all the different segments of moto,” said Bacon. “Everything from the Pista GP R which is Valentino Rossi’s helmet, the ultimate MotoGP helmet, down to the Corsa which is kind of a track/road helmet that’s a little bit more aggressive. We make an entry-level helmet, the K3 SV. We also make the AX-8 which is an off-road style helmet.”

That pretty much covered the existing line of AGV helmets, but one of the exciting new entries for 2018 which just went on sale is the Sport Modular helmet. “The newest helmet we have is the Sport Modular. This helmet is designed with the same principles of the MotoGP helmet. It’s the first of its kind in its class that’s a fully carbon modular helmet. There are other helmets on the market that might have a carbon head and a plastic chin or vice versa, but this is the first fully carbon modular helmet,” said Bacon.

In case you’re unfamiliar, a modular helmet is hinged in a way that allows the whole front of the full-face helmet to open up and turn into an open-face helmet. Modular helmets are favorites for touring riders and normally aren’t very sporty, until now. This thing only weighs 1295 grams (2.9 pounds). I’ve lifted it and it is unbelievably light, especially compared to other modular helmets.

“Generally, modular helmets are really heavy, so this is something we really expect to take off this year,” said Bacon. “If you were to look at other modular helmets, they’re usually a little bit rounder. This one has a very sporty look, very aerodynamic.” The Sport Modular helmet also comes with a reversible crown pad with a hot side and a cold side adding all-season versatility.

By promising MotoGP levels of protection, extremely low weight, superior aerodynamics, and the versatility of being a modular helmet, the AGV Sport Modular just might be the perfect motorcycle helmet.

The other new items in the 2018 AGV lineup are an attempt to cash in on the growing retro-modern motorcycle craze that’s been spreading throughout the industry. The AGV Legends line of helmets coming out in the second quarter of 2018 is “our interpretation of vintage helmets and putting a modern twist on it,” according to Bacon.

“It’s a very vintage helmet,” said Bacon as he showed me a gorgeous retro full-face helmet. It might look overly simplistic in its design, but according to Bacon, it’s very modern in every way other than its appearance. “I’ve worn this helmet and I’m blown away by the ventilation,” said Bacon. “These are very compact so it doesn't look like a big bobblehead on your head.”

Indeed, new retro style helmets usually end up being kind of an odd shape, but these AGV Legends helmets look more sleek and slim compared to other brands’ attempts at a vintage looking helmet with modern protection. Next to the full-face helmet was an open face helmet with a similar vintage look, minus a chin bar.