The VacLife Car Air Compressor Is Proof You Get What You Pay For: Review

Once is a coincidence, twice is a trend, and the third time’s…lucky?

We’ve all been there at some point. You come out of your house or your place of work to a flat tire. Maybe you pull out your motorcycle or bicycle after sitting for five or six months of winter only to find out the tires have little to no air in them. Most people don’t have a full-size air compressor for a quick fill at home.

And whether you are at home or on the road, a multi-gallon air compressor isn’t an option and driving any distance to find a fill will likely destroy your tire. What is handy is a portable compressor that can be kept in your vehicle and powered from your car’s 12-volt socket. We’ve been testing a lot of them here at The Drive. So, so many.

We scrolled through Amazon to find a few more portable air compressors to test to round out the series of reviews, and we came across this VacLife unit for $30 (at the time of writing). It had 19,650 reviews and an average 4.5-star rating. VacLife's compressor is also $10 more than the Gerchway, but $27 less than the Viair, $30 less than the Avid, $50 less than the Jaco, and a whopping $85 less than the Smittybilt we've tested in recent weeks.

Those seem like pretty good numbers, but we’ve been burnt before. In our best Jeremy Clarkson voice, we asked, “How bad can it be?” We bought and tested it, now let’s discuss how bad it actually was.

Unboxing and Initial Impressions of the VacLife Car Air Compressor

First impressions of the VacLife when it arrived were generally fine. The cardboard packaging looked better than expected for something so inexpensive.

There are some technical specs on the side of the package indicating maximum pressures, as well as the tire sizes it’s capable of inflating. The box listed that the maximum pressure for a tire was 50 psi and the maximum tire width was about 245 mm. What perhaps should have been an immediate red flag is that under Customer Service, the email address listed was a Gmail address. Sure, you ordered this off Amazon, and yes, it’s a low-cost product, but you can’t be bothered to register a domain and have a legit address? Does this inspire confidence or would you get the feeling of regret?

Pulling it out of the box, things still looked promising. The compressor had a bit of heft to it, which indicated to me that there might be a reasonably sized motor within, and the plastic casing didn’t feel like cheap plastic does. The LED display beneath the smoked plastic cover, however, looked right out of a 1980s kid's first science kit, where you play with basic electricity. But hey, if it works, who cares?

Putting the VacLife on the scale, it weighed in at 2 pounds, 1.4 ounces, lighter than expected given the size. Its physical dimensions were 9.5 inches long, 6 inches wide, and 3.5 inches thick, which seem to be perfect for your car’s trunk. The air hose coils up into a small cavity at the back of the unit and the power cord comes out of that cavity. However, you can not fold it up tight enough to tuck it back in there, so it hangs out in the breeze.

I tested the VacLife on two cars with nearly identical results: a 2005 Honda Element and my wife’s 2015 Ford Edge. The tires on the Honda are 215/70R-16 Cooper Discoverer ATS 4S, while on the Edge are 245/60R-18 Michelin Latitude Tour HPs. Both are well within the aforementioned capabilities.

I lowered the pressures from 35 psi to 19 psi on both, checking them with both the VacLife’s built-in pressure gauge and a Craftsman Digital Tire Pressure Gauge. While I’ve found the Craftsman unit is as accurate as high-quality racing gauges, the VacLife read 1 to 1.5 psi lower at both the high and low ends of the pressure readings.

As for airing up the tires, first up was the Honda. Once plugged in, I preset the pressure to 35 psi. The LED display flashes as the unit primes. After it stops flashing, it’s ready to go.

Unlike other compressors, it wasn’t absurdly loud. On inexpensive units, the motors running the compressor tend to be loud, like live concert-level loud. This one wasn’t, even in the face of a decibel test using an app called NIOSH (National Institute for Occupational Safety and Health) Sound Level Meter. With the phone next to the VacLife, it measured 91 decibels. That’s not bad considering it’s the equivalent of a shouted conversation or a subway roar.

With the timer on my phone ticking off the seconds, it took five minutes and 15 seconds to fill my tire back up to 35 psi. That’s according to the VacLife. The Craftsman gauge measured 36.5 psi.

It took me about five minutes to move things around to set up and test my wife’s car. If the VacLife’s motor was hot after use on my Element, it had some time to cool off. I dropped the pressure down to 19 psi on the Edge, set the VacLife to 35 psi, and let it rip. At first, things seemed to be going fine, though it was taking a little longer for the Edge’s tire to come up to pressure.

I had the timer on my phone running again, and somewhere after the six-minute mark, the sound of the VacLife changed ever so slightly. Just before the seven-minute mark, the unit started to struggle. At seven minutes and 15 seconds, it started to cut out. And by seven minutes and 44 seconds, the VacLife shut off completely. It had filled the tire to an indicated 33 psi. Craftsman said 34.5 psi.

I was disappointed and confused by the failure, but knew I should give the VacLife another shot. I waited until the next day to try again. I repeated the test I did the day before, and the results were nearly identical. I took five minutes, 30 seconds, on the Honda to fill the tire from 19 psi to 35 psi, and when it came time for the Edge, it shut off at eight minutes with 32 psi. Once is a coincidence, twice is a trend.

I ran this test a third time several days later. Third time lucky? It appears so. On my Element, it took five minutes and 37 seconds to go from 19 to 35 psi. This time, however, I timed the break between the Element finishing until I began the inflation on the Edge.

My shuffling and setup took five minutes and 46 seconds. The Edge took six minutes and 51 seconds to finish filling up successfully. Well, it was somewhat successful. Pressure was off by a few psi, and the VacLife was beginning to make strange noises.

The VacLife is reasonably cheap and compact. In most SUV and crossovers these days, there is a nook in the back for storing tire-change equipment or other safety items. Sometimes it’s along the sides in the cargo area, hidden behind trim panels. Other times it’s under the floor with the spare tire. This should fit in there just fine.

The unit was easy to use, the instructions are right on the front, and it is quiet compared to similar units. It also has a built-in light, so if you have to use this at night, you can shine the light on the tire and see what you're doing.

The maximum tire pressure the VacLife is rated for is 50 psi, which should suit most cars and trucks these days. The maximum recommended tire width is about nine and a half inches, however, so anything more than a mid-size crossover is out of the question.

What’s worse, though, are the first two failures. When you need an emergency air compressor to get you out of a bad situation, you want a dependable one. The VacLife wasn’t able to inflate a tire to the pressure it requires, and that isn’t good. It shut off before its recommended 10-minute run time, which is unacceptable. Also, the tire pressure readings were off.

Lastly, when your customer service contact is a GMail account, we’re not filled with confidence if something goes wrong and you need customer assistance. The box says that you can contact the company for a replacement or a refund. Comments on Amazon say you’ll be lucky to get either.

Skip it. The VacLife has some nice features: It has preselected tire pressures and a built-in light, and it’s quiet. Unfortunately, the thing it needs to be most, an air compressor, can’t be trusted. Perhaps it needs a better moto, or more cooling area to handle the load, but in its present configuration, I would choose any one of the other portable air compressors that we’ve already tested.

The Drive’s editors aren’t psychic, so to find frequently asked questions, we scrolled through Google’s “People also ask” box for anything that may be lingering in your heads.

Q. What is the maximum tire pressure for inflation?

A. It has a maximum pressure of 50 psi for automotive tires.

Q. How long is the power cord and the air hose?

Q. Does the VacLife Air Compressor have a warranty?

A. Yes, VacLife offers a replacement or refund, however, your mileage may vary.

The Drive independently evaluates gear by putting products in the hands of subject-matter experts. The products we test may be purchased by The Drive or our staff or provided for review by a manufacturer. No matter the source, our testing procedures and our assessments remain free from third-party influence.

We’re here to be expert guides in everything how-to and product related. Use us, compliment us, yell at us. Comment below and let’s talk, y’all. You can also shout at us on Twitter or Instagram. You can also reach us at guidesandgear@thedrive.com. 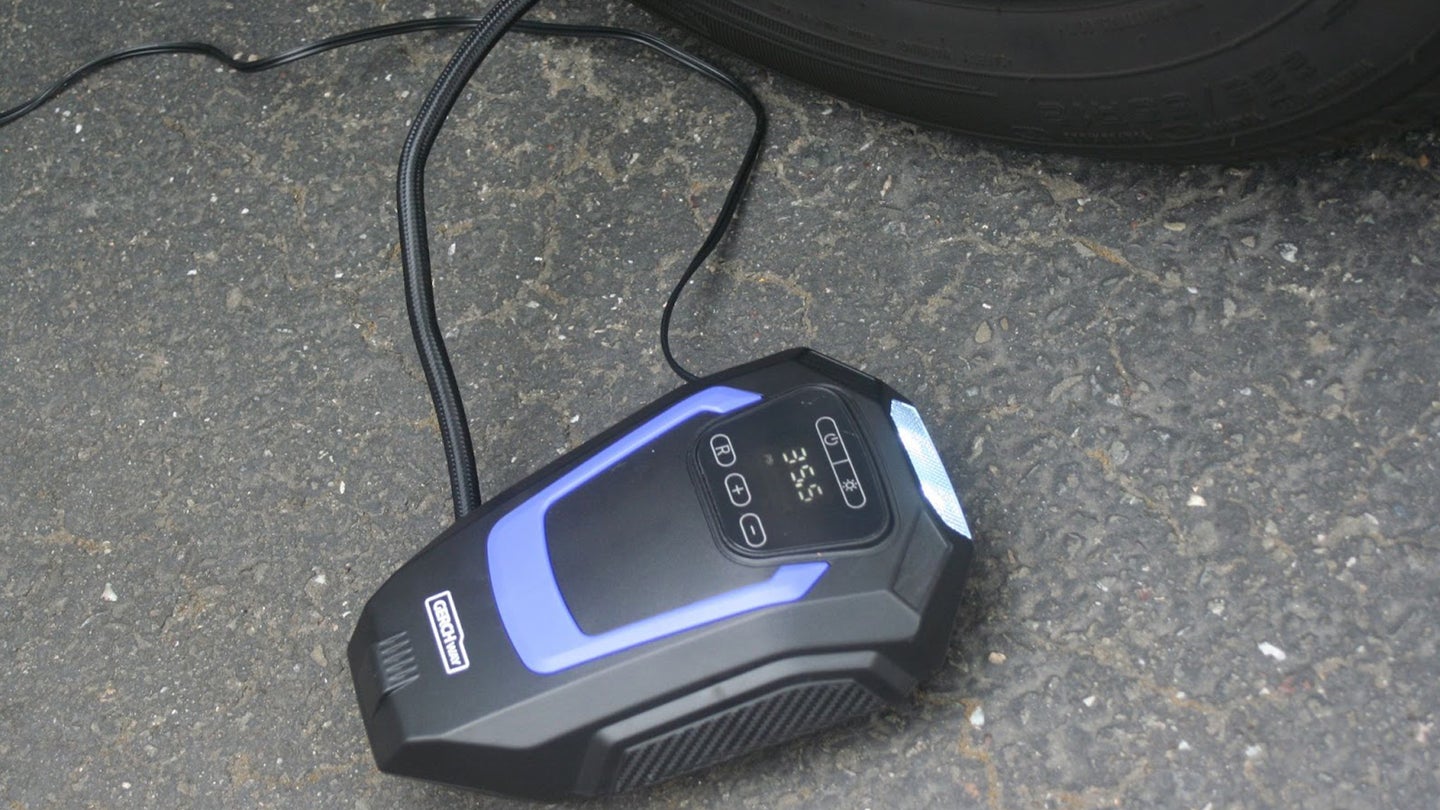 Keeping the Pressure Up With the Gerchway Portable Air Compressor

A convenient, compact inflator for your tires. 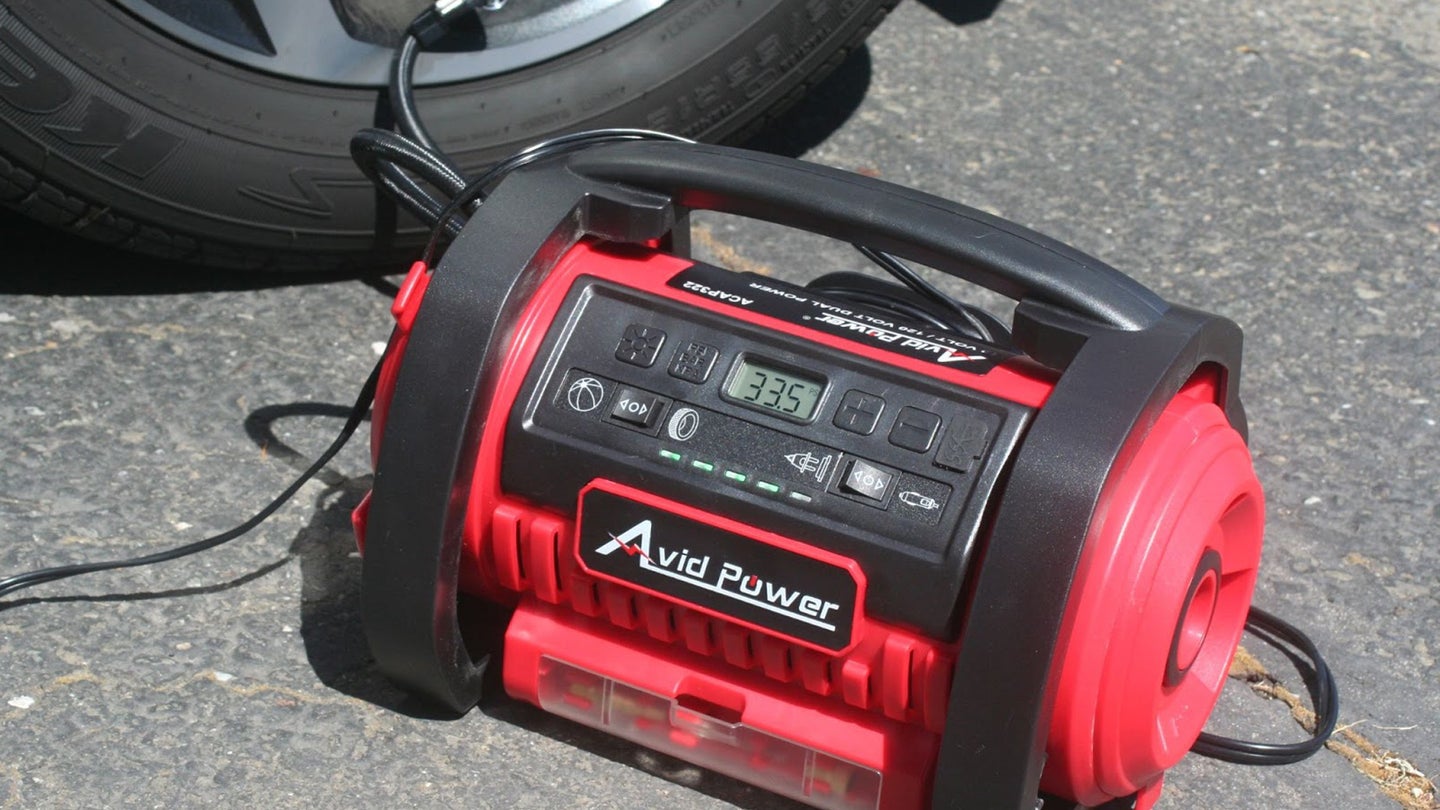 The Avid Power Tire Air Compressor Is Both Too Small and Too Big: Review

It reminds us of a children’s book with bears and one precocious little girl. 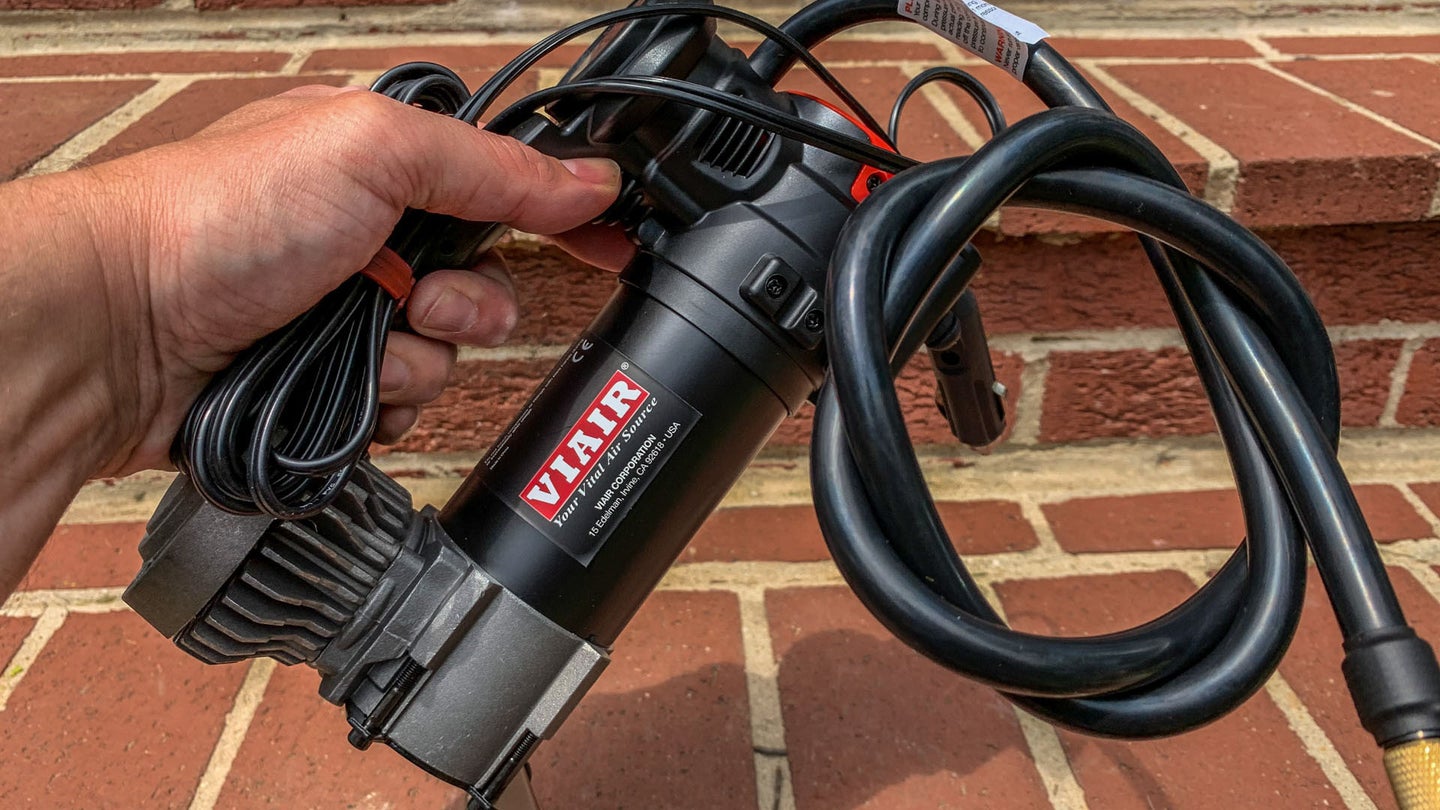 It’s not the cheapest or the lightest, but there’s a lot to love about this powered inflator.