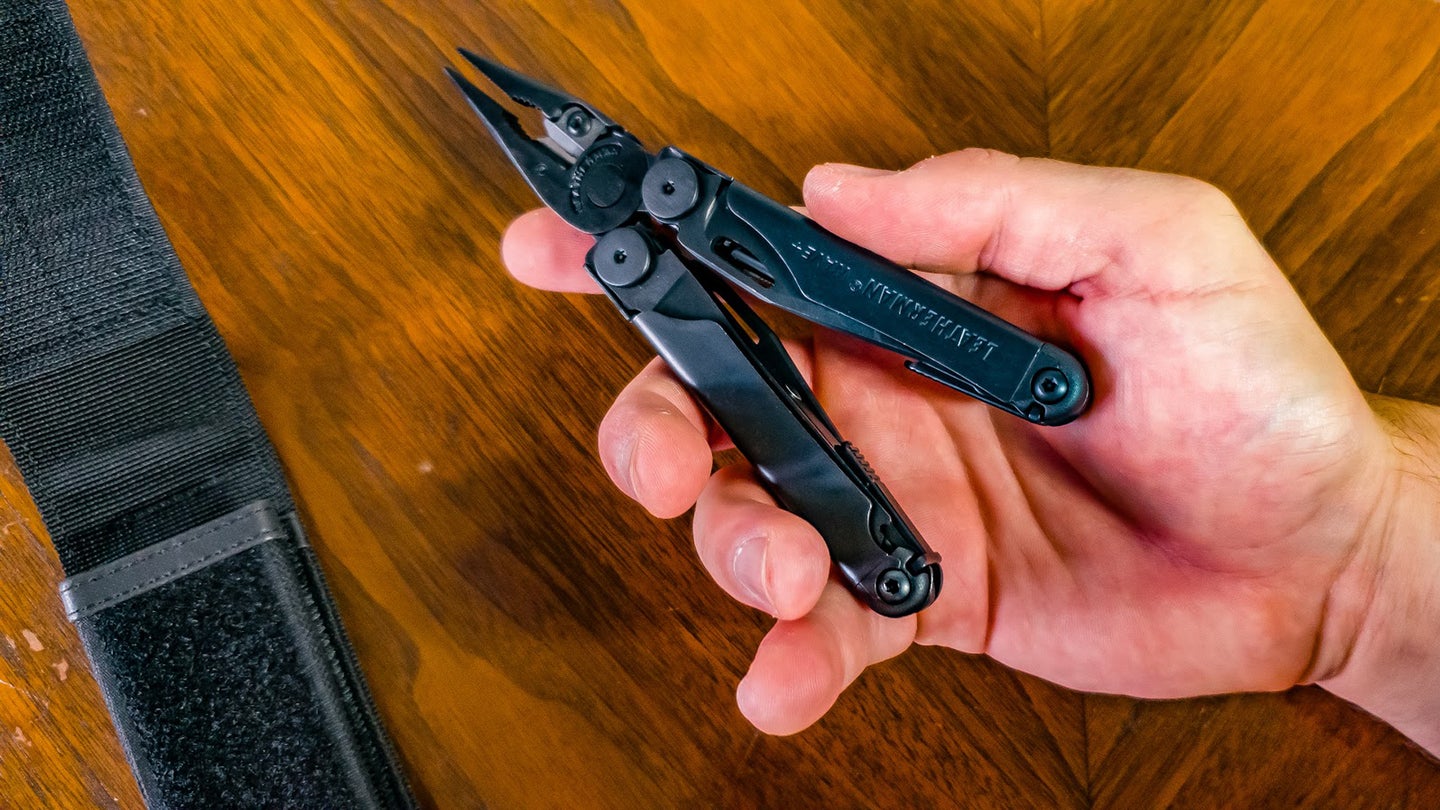 When Leatherman introduced the Pocket Survival Tool (PST) in the early 1980s, it established a form that’d become synonymous with the brand: a plier-centric multi-tool with several implements that fold out of its handles. The original PST was created to address the deficiencies of other multi-tools such as the venerable Swiss Army Knife. Modern multi-tools, however, now has all sorts of loadouts that can aid in everything from escaping harrowing situations to tightening a loose screw.

Given how hot the competition has become, how could Leatherman not respond? Enter the Wave+. Larger than the earlier Wave model, the Wave+ takes the PST design and brings it into the 21st century, moving crucial tools to the outside and adding several features to improve longevity and increase user convenience. Yet for just shy of $100 — similar tools average $50-$60 — does the Wave+ justify its higher price tag?

The Drive purchased a Wave+ so we could give it a close look. This means I have no qualms about testing the tool to failure. (Insert maniacal laugh here.) Let’s get after it.

Unboxing and First Impressions of the Leatherman Wave+ Multi-tool

Leatherman products. What can I say? You know the drill. The Wave+ comes in a yellow paper tray featuring a white plastic insert, a cover card, and a gray paper sleeve featuring the Leatherman logo on every surface. The cover card includes basic instructions, but they’re not model-specific; if you’ve used one Leatherman, you’ve used them all. The card does, however, make for a great testing medium for knife-blade sharpness.

Inside the packaging is the tool itself and a black nylon MOLLE-type sheath. MOLLE stands for modular lightweight load-carrying equipment. It’s a military-style carrying system that allows the user to attach things like multi-tools, knives, and other items onto backpacks, belts, and other gear. Above the horizontal MOLLE loops on the back, the segment of the strap that loops under the first row can be used as a belt loop, allowing carry flexibility. Additionally, Leatherman makes an aftermarket pocket clip to carry it easily without a pouch.

The downside of the pouch is that it’s a little too deep, making the tool difficult to retrieve, especially with gloves. My hack? I pinch the base of the pouch, which forces the tool up out of the pouch about half an inch so I can grab it more easily.

The tool is compact but still carries some heft, being made entirely of steel. At 4 inches long, an inch wide, and .7 inches thick when closed, it’s not a large tool, but it also won’t disappear in your pocket. Opened, the tool is a usable 6 inches long, and the handles provide ample control, even with my larger-than-average palms. The entire tool is coated in black oxide except for the undersides of the wire cutters, files, and edges of the knives.

I’ve heard people complain that Leatherman oxide coatings will rub off onto your hands with heavy use, but they also say that the Wave+ counters that with a more even oxide coating. The tool is also available in a stainless option if you prefer the classic Leatherman style, but that will come at the cost of some corrosion resistance and tactical points for all you LARPers out there.

In its role as a pocket tool kit, the Wave+ has tools that can address several issues, ranging from cutting wire to tightening bolts all the way down to cutting fishing line and tightening the screws on your eyeglasses. The pliers that the tool centers on are a combination of needlenose and standard pliers and have replaceable wire-cutting blades at the base of either side, which will do wonders to increase the utility of the Wave+. The plier action is smooth, aided in part by the gallon of lubricant applied to the hinge at the factory. You’ll be wiping the tool down for days after purchase.

The outside has a 420HC knife, serrated knife, and saw as well as a file with both coarse and diamond options. These fully locking tools are accessible without opening the tool, and the plain edge and serrated knives can both be opened one-handed.

The internal tools are simultaneously robust and surprising. In addition to a socket to use with Leatherman-style screw bits (one of which is included), the Wave+ has more unusual offerings, such as a glasses screwdriver and a pair of spring-loaded scissors. It also includes the usual tools, such as a dedicated flathead screwdriver (which I use as a pry bar) and a bottle and can opener. The outside edges also have both metric and imperial unit graduations to be used as a ruler for rough measurements.

Getting After It With the Leatherman Wave+ Multi-tool

Up first in any review of mine involving bladed instruments is a factory sharpness test. The plain-edge knife features an even grind, and running my thumbnail along the edge yielded no indication of rough patches or burrs. The knife also cut handily through printer paper and bubble-wrap envelopes, and it produced a continuous winding cut through an old FedEx envelope, which is a great indicator of the sharpness of the blade.

The file is very useful for anyone who deals with machinery or parts where pitting and burring can become an issue, which is common in automotive repair. This tool is a good one for those who deal with out-of-spec machining.

Fortunately — or maybe not — a friend of mine broke a taillight on my truck. It’s usually not a good thing when someone breaks stuff on your truck, but this time it was fortunate because I had something to fix with this tool. Once I got the replacement part, I realized I didn’t have a wrench on hand. Instead, I used the Wave+ needle-nose pliers. The taillight job was complete in less than 10 minutes. As for the Leatherman’s wire cutters, I snipped wire coat hangers, one after the other, and it practically sailed through each one.

The Leatherman bit screwdriver worked very well for loosening screws, which is more than I can say for some multi-tool screwdrivers I’ve tested. If you get the accessory kit, you can even use Torx bits and Allen keys with this tool. The glasses screwdriver was very useful for removing a link in my watch bracelet. The scissors are fine at cutting paper, but they excel at cutting fishing line and other types of string — even bandages in a first-aid situation.

The bottle opener opened a bottle, too, so that’s a pass.

One of my favorite tests of durability when it comes to knives and other tools is the salt test. I soak a tool in water, roll it in salt, and then leave it out in open air for 12 hours. This can cause surface rust on even the most durable stainless-steel knives and leave lower-end offerings with complete loss of function. The oxide coating on the Wave+ proved very effective protection; only the edges of the knives (which are untreated) showed any kind of corrosion — even then, only a little. If corrosion is a concern for you, I heartily recommend the black-oxide option.

This is a thoroughbred and versatile multi-tool and could very well be the last multi-tool that you ever buy, something we’re very keen on at The Drive. The Wave+ includes well-made tools and is not useful only for the tactical user but also for the handyman and home mechanic.

The cost may not be what some consider affordable, but for the number and quality of tools you get as well as a 25-year warranty, you’d be hard-pressed to find a better value. With the Wave+ you’re getting a tool that just works, and one that’ll stand the test of time.

What Not Great About the Leatherman Wave+ Multi-tool

I struggled to find something to complain about with the Wave+, but there are a couple points to mention. For instance, tell someone that in order to get a good pocket multi-tool you’ll need to shell out about $100, and you might get a funny look. But this Leatherman is a serious multi-tool for the serious user, and that (as well as the price) could limit its market appeal.

Another point of concern is whether the black-oxide coating could eventually rub off on your hands or other objects. Still, I’d take that over the risk of corrosion, especially on the 420HC components such as knife blades.

Verdict on the Leatherman Wave+ Multi-tool

The Wave+ is a Leatherman for those who appreciate long-lasting pocket tools. It works, it’s backed by a good name, has an excellent warranty, and is built of solid materials. If you had to buy one multi-tool to serve as your dedicated assistant in outdoor situations, working on your car or around the house, or any other sort of situation where you’d expect to need a toolbox in your pocket, it will serve you well.

Add a pocket clip and Leatherman’s bit kit, and you’ve got the multi-tool that can do virtually anything. If my sole complaint about this tool is the cost, so be it. You get what you pay for. 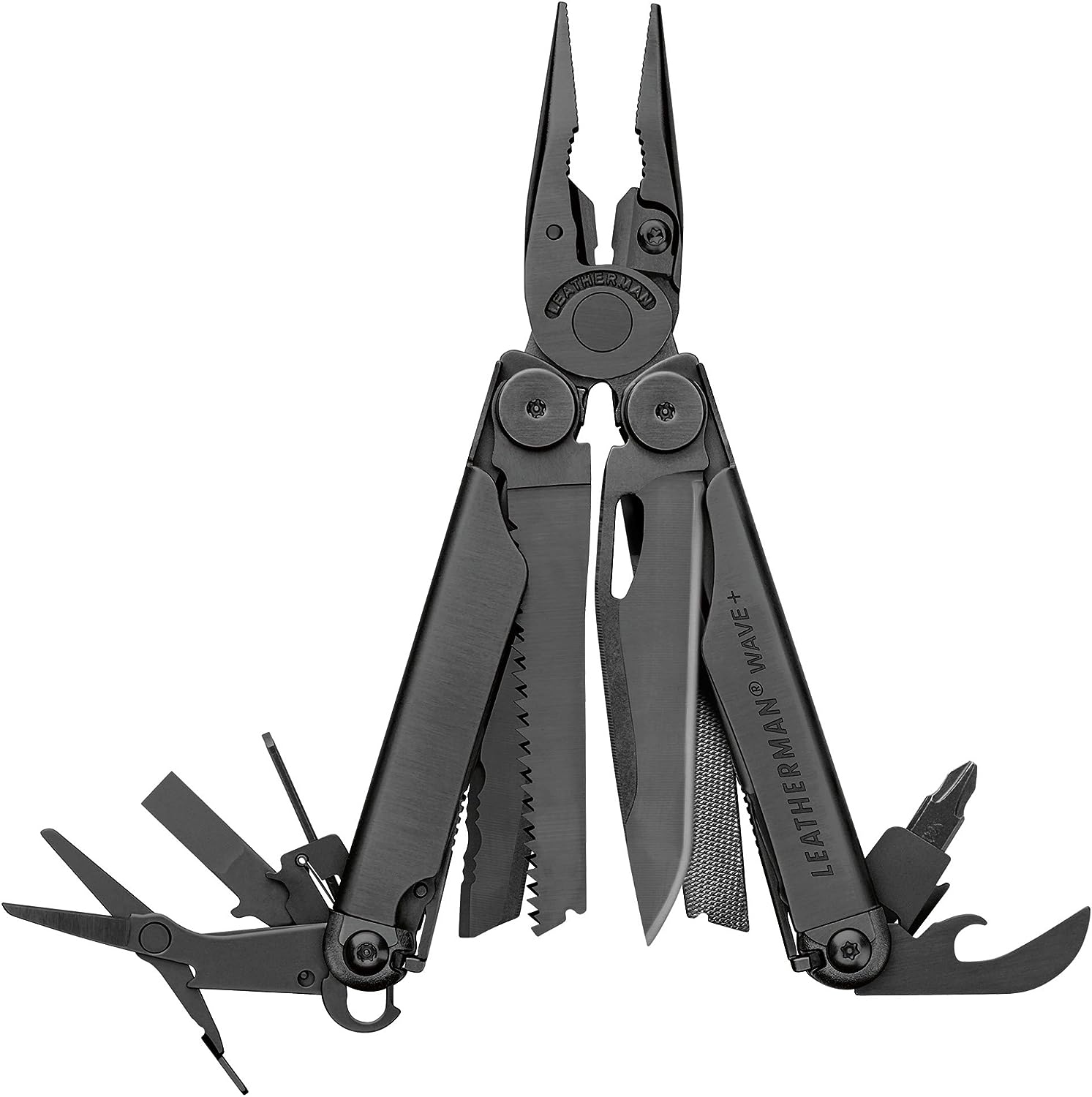 Add a pocket clip and Leatherman’s bit kit, and you’ve got the multi-tool that can do virtually anything.

FAQs about the Leatherman Wave+ Multi-tool

Got questions. The Drive has answers.

Q. How much does the Leatherman Wave+ cost?

A. As of this writing, it’s about a hundred bucks on Amazon.

Q. What is oxide coating?

A. According to AFT Fasteners in the Dallas/Fort Worth area of Texas, black-oxide coating is a chemical reaction for ferrous metals with oxidizers that causes an integral protective surface.

Q. Are Leatherman tools made in the United States?

A. Yes, well, 83 percent of them are. In 2006, Leatherman was sued over using imported tools in their multi-tools. Those were files and corkscrews from Europe, the actual plier jaws from Mexico, and the fasteners from elsewhere. The rest of the tools are made in the U.S. The best indication of quality is Leatherman’s reputation and willingness to stand behind its products.

Q. Are there any discounts available?

A. If you’re reading this and you’re in the armed forces or if you’re a first responder, teacher, student, or medical professional, you get a 40 percent discount on the Wave+ or any other tool from Leatherman. So, my only complaint about the Wave+ is moot. You do need to sign up for their mailing list and get spammed with emails, but unsubscribing is pretty easy.

In the interest of clarity, The Drive want you, our dear readers, to know that the products we get in arrive from a variety of sources, including those we purchase ourselves and those we receive from manufacturers. No matter the source, we maintain our editorial independence and will always give you our honest assessment of any product we test.