Does the New Craftsman 40-Piece Mechanic’s Tool Set Live Up to Its Former Self?

Time to find out if Stanley restored Craftsman to its former glory. 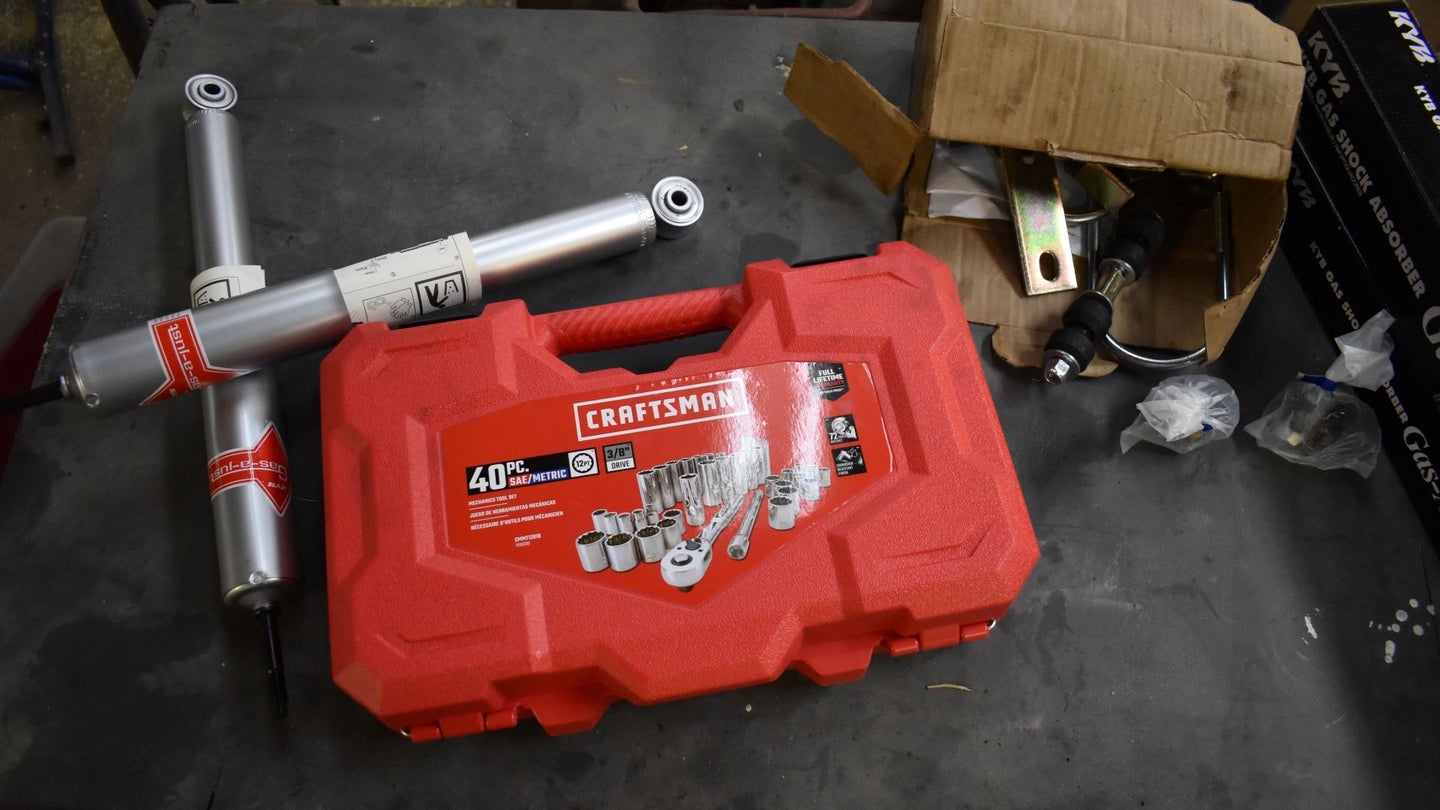 Everyone I knew growing up used Craftsman tools. That’s probably because it’s what their parents used, and it makes sense to put your trust in the tools you’ve watched others have good luck with. Unfortunately, if you’re in my age group you didn’t have the opportunity to invest in a brand-new, made in the United States tool set from Craftsman.

Still, you’ve stuck by the brand because the devil you know is better than the devil you don’t. Besides, even if Craftsman quality isn’t what it once was, it’s good enough to tackle the kind of work we do on our own cars. Right?

Knowing the issues many folks have with modern Craftsman tools, it was exciting to hear that the brand was being handed over to Stanley Black and Decker. Stanely promised to restore the brand to its former glory. To the DIY crowd, the idea of having access again to high-quality tools without going broke was good news. Is that what we got out of the deal?

Some time has passed since then, and it looks for the most part to be more of the same for the Craftsman line. Take this Craftsman 40-piece tool set, for example. There’s an updated ratchet design with engraved sockets, and even the case seems to be a lot better than what we grew up with. We know it’s not fair to take these updates at face value, which is why The Drive is putting this set to the test. We want to know if it’s any better than what we’ve had to work with and if it’s good enough to get Craftsman out of the shadow of its former self.

Opening up the Craftsman tool set was nothing short of refreshing. I won't say it's miles apart from anything in its price range, but Craftsman took the time to help its customers feel like they are getting a better product.

The first thing I noticed is the quality of the blow-molded case. Sure, it's still a hard-plastic case, but it feels a lot more robust than what I’ve handled from the brand in the past. I don't suspect the latches will break easily, and it holds all of the tools firmly in place. I'd even say that it almost has too good of a grip on the sockets; pulling them free is a decent workout. Maybe that's an exaggeration, but they aren't likely to come flying out due to a minor bump.

Speaking of sockets, it's good to see that Craftsman didn't get on board with laser-etched descriptors. Not only does each socket still feature its size engraved onto it, but the font is much larger and more legible than the smaller print we've dealt with for years.

This is only a 40-piece set built around the 3/8-inch ratchet, yet you still get a decent selection of metric and SAE sockets. I'd say pairing this kit with some combination wrenches and a 13/16 spark-plug socket would give a person the means to tackle a solid range of general tasks under the hood.

I’ll admit that I was skeptical of the ratchet. After all, it's not the 36-tooth Craftsman ratchet I'm used to. This new ratchet has double the teeth, smooth edges, and a high-polish finish that feel almost alien to the brand — in a good way.

Still, I wasn’t sure if I liked the ratchet in my hand all that much. I know that just holding tools isn't a real way to feel them out, though. So, I set out to find a project to tackle.

Getting After It With the Craftsman Tool Set

I’ve had Craftsman ratchets skip teeth and send my knuckles into plenty of sharp objects before, but I never hesitated to pick up the tools and get to work. It’s not like I really had a choice. The job still needed to be done, no matter what tools I have at my disposal. I didn’t want to treat this set any differently. My project Charger needed new shocks on all four corners, so that’s what this Craftsman set would be used for.

Since this is a 40-piece set with only one ratchet and no wrenches, I’d need to bring along some additional hand tools to tackle the mounting bolts on the shocks. I won’t take points off because of that. This is a relatively small set, and Craftsman does offer larger mechanic’s tool sets for anyone in search of a more inclusive collection.

Overall, the experience was good. Scratch that. These blew me away. Maybe I just wanted to find something good about the new Craftsman, but that ratchet felt amazing to use, far better than anything else I’ve used from the brand in some time.

Craftsman doesn’t follow in the same footsteps as other tool manufacturers by offering ratchets with round grips. It stuck with the rectangular theme we’re all familiar with but modernized the design with rounded edges. This simple update makes a major difference. The ratchet felt natural in my hand, and I experienced zero discomfort throughout the entirety of the project.

I won’t say it’s perfect, however. While nothing broke, I did experience some small hiccups during use. I did accidentally bump the direction-selector switch enough times to get me cursing, and I had a 12-point socket slip off the hardware more than once. A little mindfulness about your form should help you avoid those issues.

The warm and fuzzy feelings of believing Craftsman moved up a tier or two in the tool world ended, though, when I took a look inside the ratchet. A little online searching led me to discover that the Craftsman ratchet might share internals with some Stanley ratchets I’m not ecstatic about. Opening up the ratchet and comparing it side by side with a Stanley model confirmed that they were the same.

I’m a huge fan of the way this tool feels in my hand. It might not have the most aesthetically pleasing design, but it fits my hand more naturally than any other ratchet I’ve used. That level of comfort might be enough for me to forgive it for the sins I’ll discuss in a moment.

On top of feeling good, the ratchet and sockets did perform well. Changing shocks is a fairly harmless job, but some of my hardware was gummed up enough to require some serious torque to remove them. Despite that, there were no real performance or durability issues.

That 72-tooth mechanism did make a big difference when dealing with the shock mounts tucked into some tight spaces on this car. Seventy-two teeth is pretty standard for today’s sockets, and since my old Craftsman ratchets feature just 36 teeth, the change is a huge improvement.

I’ve been able recently to put quite a few ratchet and socket sets to the test. The tools themselves hardly pose an issue; it’s the cases that drive me up a wall. The fact that Craftsman’s case is above average is refreshing.

I won’t rave too much about it because it is still a blow-molded plastic case. But it is far more robust than what most budget-friendly sets come with. This has nothing to do with the tools themselves, but it is something I think other manufacturers can learn from.

What’s Not Great About the Craftsman 40-Piece Set

The Craftsman set isn’t perfect, and I did run into a few issues while working. The direction-selector switch isn’t recessed or protected by raised sections on the back of the ratchet. It’s somewhat pronounced, and I accidentally bumped it and switched directions more than once. That’s not a major deal, but it was annoying.

I also had the deep-well 12-point sockets slip off a few bits of hardware. Socket design isn’t the only thing that can cause this, but it happened more than once.

Those two issues are easily avoidable with some careful application, but what really bothers me is what’s inside. Taking a look at the inner workings of a Craftsman 72-tooth ratchet, I found that it relies on a single pawl that’s pressed into place with a thin piece of metal. That flimsy piece is likely to slide out of place and jam the works. Stanley Black and Decker ratchets have that same design. In fact, the internals of this 3/8-inch ratchet are interchangeable with the Stanley black-chrome ratchet.

I’m getting to be less critical of this design as I use the ratchet more, but I can’t understand why Stanley doesn’t use a more robust piece of material to boost the reliability of this design.

This is a step in the right direction for Craftsman. The brand seems to be making an effort to update its line to meet modern standards. Craftsman got a lot of things right, and this set will make a difference in your working experience. It’s a great addition to any DIYer’s collection.

I can’t say it’s the greatest set to put your money towards, however. Even if I have more confidence in the internals after using it more often, I won’t say it’s something I’d recommend for heavy-duty work. But the Craftsman’s lifetime warranty makes it easy to live with the potential issues I’ve discussed.

This is a step in the right direction for Craftsman.

Q. Do Craftsman tools still have a lifetime warranty?

A. Yes, they do. Instead of having Sears swap tools for you, Lowe’s is now in charge. Thankfully, the process of doing so is exactly the same, and lifetime Craftsman tool owners don’t need to jump through hoops to have their warranties honored.

Q. Where are Craftsman tools made now?

A. Craftsman has been expanding its production of U.S.-made tools, but plenty are still made overseas. This particular set is made in Taiwan, and I suspect many of its hand tools are of similar origin.

Q. Is Craftsman a good brand?

A. Yes, it is. Despite not being as good as it once was, there’s no arguing that it’s a leader of the pack as a manufacturer of tools suited to the DIY crowd. The balance of pricing, selection, and quality make it a tough brand to beat in this segment.

The Drive's Gear section is our brand-new baby, and we want it to grow. To give you, our dear readers, clarity on the process, we want you to know that the products we get in arrive from a variety of sources, including those we purchase ourselves and those we receive from manufacturers. No matter the source, we maintain our editorial independence and will always give you our honest assessment of any product we test.

Time to see if Stanley took a page out of Craftsman’s book.

Milwaukee’s M18 Fuel Half-Inch High Torque Impact Wrench Is for When You Need the Power of Mjölnir: Review

Only those worthy of 1,400 pounds of torque need apply.

Fix Your Car Like a Professional with GearWrench’s Torque Wrench

Torque wrenches are the best way to prevent righty tighty from becoming too loosey.