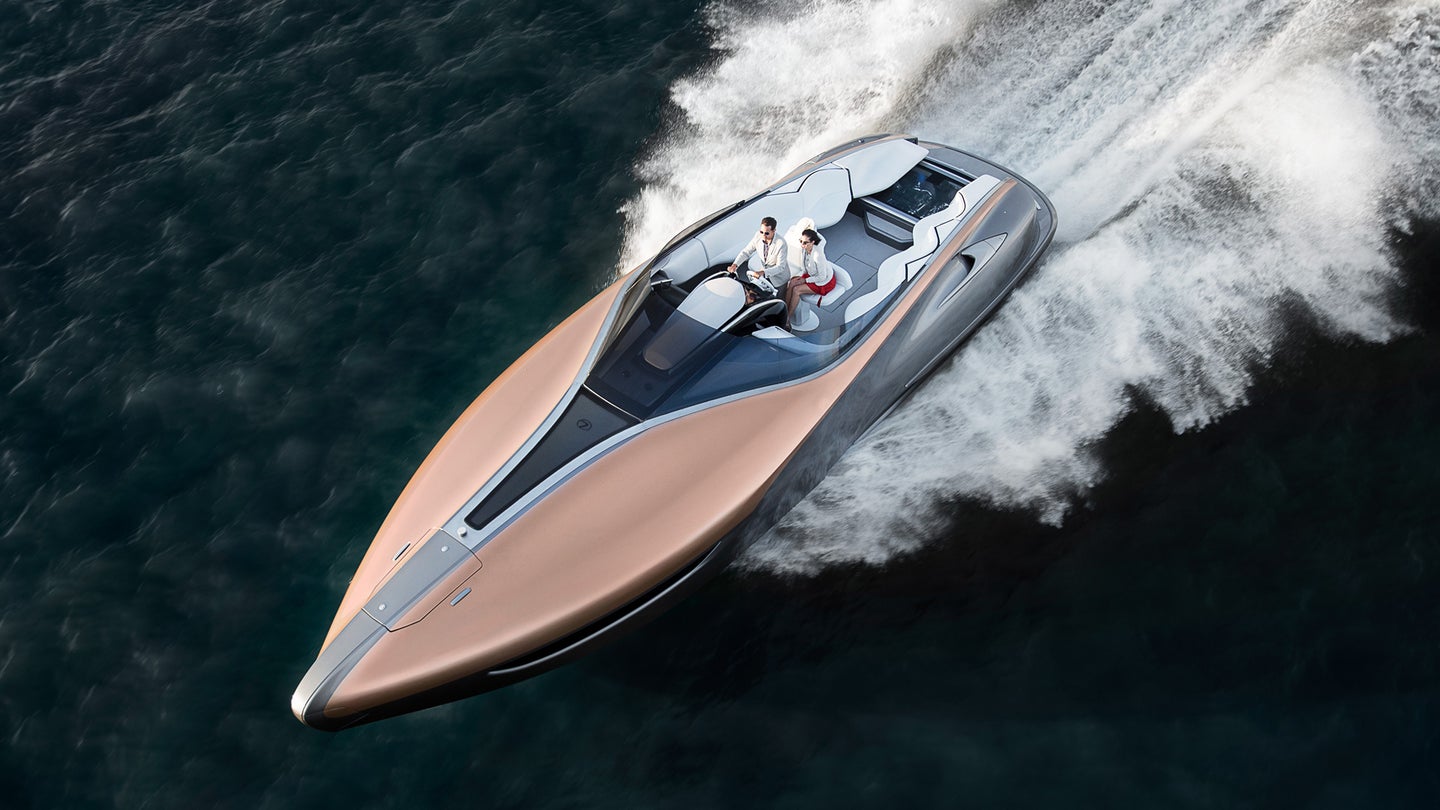 Lexus, the Japanese luxury automaker, has just revealed a new concept—except this time, it's not about wacky doors or oversized, pixellated grilles or futuristic powertrains. This time, it's a yacht.

With the aptly-named the Sport Yacht Concept, Lexus decided against outsourcing motivational duties to conventional, diesel-based maritime powerplants, and instead stuffed two of their impressive 5.0-liter V8 engines—the same mills found in the GS F, RC F, and the upcoming LC 500—inside. Don't call this a parts bin special, though; together, the V8s produce 885 horsepower, propelling the Sport Yacht Concept to a top speed of 49 mph, or 43 knots.

Aside from the powertrain, the overall design and engineering of the yacht is fairly high-tech. The outer hull and upper deck are made from carbon fiber-reinforced plastic (CFRP), the same material used in the construction of the Lexus LFA supercar. According to Lexus, another yacht with the same dimensions but built with conventional materials would weigh about 2,200 pounds more than the Sport Yacht Concept.

As you’d expect from a luxury brand, there are a handful of amenities that no discerning yacht operator could possibly live without, such as an air-conditioned passenger cabin swaddled in leather, a shower, and a galley with a stove, sink, and fridge. Oh, and 4G WiFi, too.

On deck, the captain’s controls are futuristic but practical. Underwater sonar, GPS, surface radar, and digital charts are at the tips of the operator’s fingers, and a joystick to control the bow thruster sits to the left of the massive screen while engine throttle controls sit to the right of the steering wheel.

This isn’t the first time an automaker has dipped its toes in the maritime market. Aston Martin recently its its AM37 powerboat concept. Perhaps the SUV market is finally peaking, and the only way for automakers to make bigger, more bloated, and slower vehicles is to head to the ocean?

This 230-Foot Yacht Can Do 30 Knots, Has Its Own Waterfall

A high-speed oceangoing paradise for the man with nearly unlimited wealth.

The Mercedes S550 Cabriolet Is the Ultimate Yacht Rocker

Mercedes and Michael McDonald agree: Yah Mo Be There.