The Twofer: A Blessed Tee and Blasphemous Ferrari

What is “authenticity,” really? 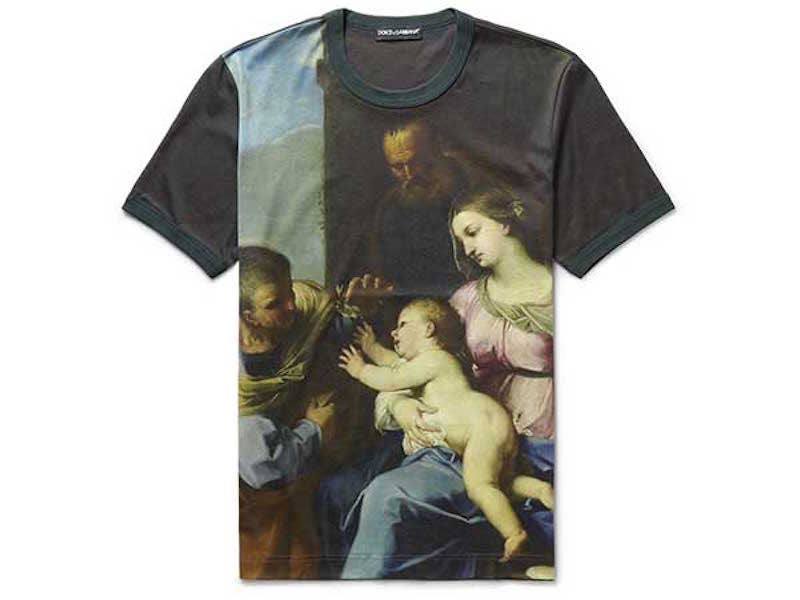 Maybe you already know, but that lusty 250 GT California from Ferris Bueller’s Day Off? Yeah, it’s a replica. Not not even a Ferrari, but a “Modena Spyder California,” built on a custom spaceframe and powered by a humble Ford V8. (Does the sky seem a touch less blue?) In a film predicated on deception, facsimile, and impressions, does it really matter? All that metal envy you had was real, even if the Colombo V12 sounds were added post-production. Those tingles really tingled. Smoke, mirrors and fiberglass—It’s the movies, babe.

Take this beautiful tee-shirt with a high-quality reproduction of a Renaissance painting. Sure, it’s not the Sistine chapel. You won’t gaze upward, pondering the unknowability of the heavens, the wonders of human ability or the ethereal penises of Michelangelo’s nudes. What your $545 does buy, however, is classical Renaissance proportioning, a serene Madonna and Jesus’ dimpled tuchas. It’s the pathos of fine art, now machine washable.

Just a few hours north of The Vatican, Maranello produces similarly beloved art. Except, oddly, this “Ferrari 308GTB” has never been inside that city’s walls. That’s because it is a replica, cobbled together on top of a 1986 Pontiac Trans Am. The only authentic thing about this “Ferrari” are the myriad logos—and even those are a degree off—but the car holds an unmistakable sense of joy. It’s Ferrari-ish, GTB-esque, an homage to the greats, a bouquet of louvers and red paint backed by a freshly-tuned Chevy 350 small-block with Edelbrock carbs. Easy up, kids. Unclutch your pearls and try not to have fun.