The essence of Italy's most hairball race, on your wrist. 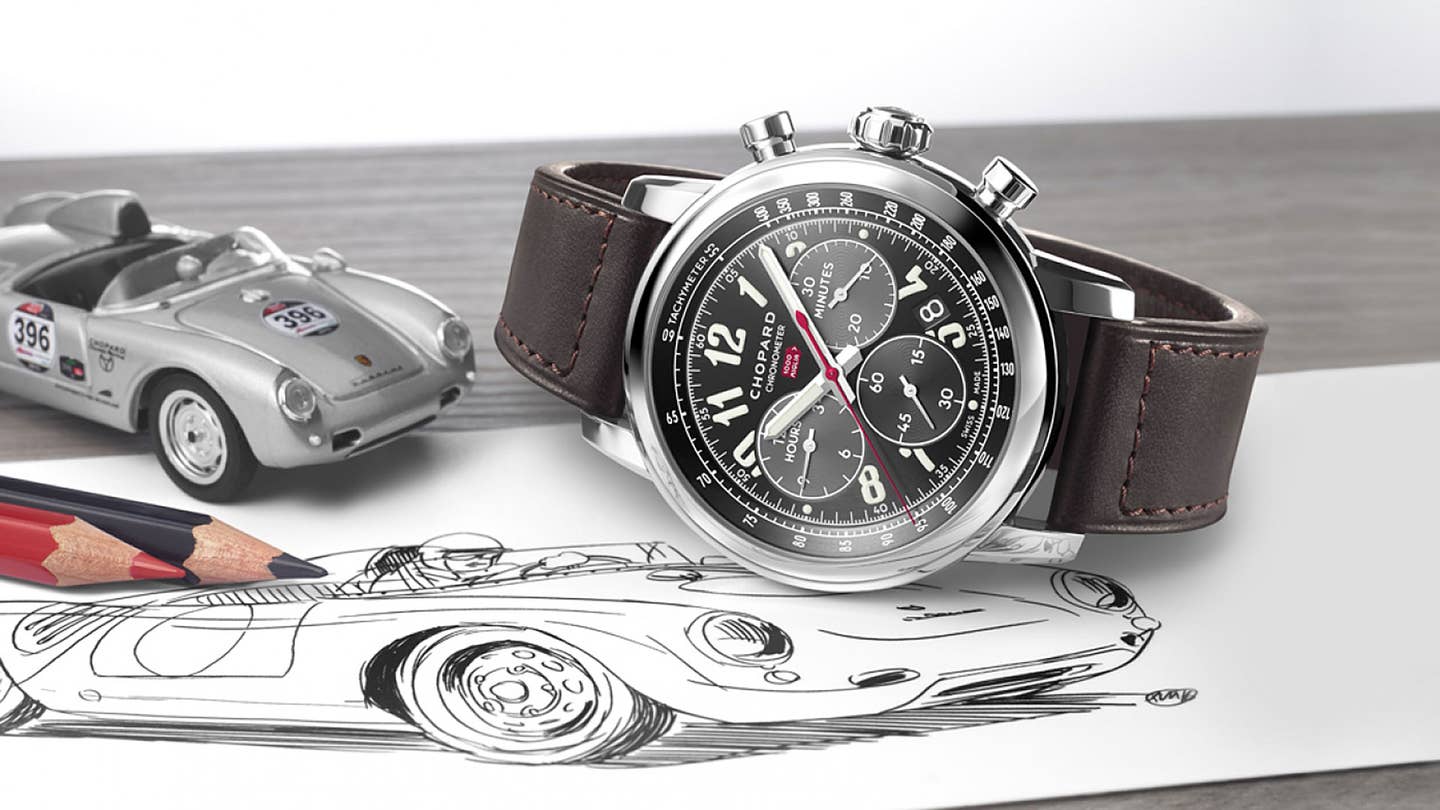 The essence of the Mille Miglia, an event that Swiss timepiece maker Chopard has sponsored for two decades, is not easy to distill. It's the elegance—some of the choicest vintage sheetmetal in the whole world shows up—mixed with the utter insanity of a competitive endurance race conducted on public roads.

Each year Chopard issues tribute watches to the race, for those in the know (though, of course, anyone can buy one, race participation notwithstanding). This year, the Mille Miglia XL Race Edition a short ways ahead of the next Mille, which starts May 19th.

And what is it that Chopard is honoring exactly?

A truly batshit-insane race that covers 1,000 miles of Italy each spring at balls-to-the wall speeds regularly exceeding 100 mph. The Mille, in contrast to any other form of automotive contest, is run on open roads so narrow and twisty and off-camber that most Americans wouldn’t dare ply them on anything wider than a Harley. Contestants fly around from tiny village to yet tinier village under motorcycle police escort. Last year I had the great privilege to drive it and witnessed the cops regularly egging me on...to go faster.

And you do this for four days straight, from pre-dawn until blackest night, barely sleeping, fueled by adrenaline and caffeine and sheer will. The people who do it right are ungodly rich. They have to be, because they’re piloting metal boats so old they cost millions—you can’t enter a car that’s “younger” than the last year of the original Mille, 1957, and it must be a marque that was run in the old Mille as well. That means Ferraris and Alfas and Bentleys and Benzes, none of which come cheaply.

So it’s a pure anachronism, an event only the Italians could revere, because it’s occasionally deadly, unconscionably wasteful, and totally pointless. The Romans invented stadiums for just such spectacle, and their descendants revel in the same circus atmosphere, standing in hoards beside the Mille corsa, egging on the drivers with homemade signs that read, in English no less, “More throttle!”

Chopard signs peg the route, and banners hammock between medieval archways as the Mille threads toward town-square time checks. Chopard signage is elegant, an artful contrast to the fanboys’ “throttle” scrawls. Read between the hashes of the XL’s tachymeter though and you see what the even is all about—speed. That scale, etched on edge against the watch’s dial, measures pace up to 400 kph, and when you run the Mille you actually use such instruments because there are tests of skill that require running segments at absolutely perfect pace. Go too fast or too slow and you’re docked points.

The XL's hour and minute timers are, likewise, useful to a Mille racer—you need to meet overall and intermediate segments—and even the luminescent hands would help if you’re riding shotgun in a 356 Porsche on a moonless night. Even the over-large numerals fit the idea of watch-as-tool, aiding legibility. Chopard says the face is “inspired by” the cars that ran the Mille between the late 1920s and 1940, but to us the Dauphine font feels lifted directly from Depression-era cigarette packets—soft, slightly sexy, and romantic. Even in the single-mindedness of the instrument, the elegance is unmistakeable.

Spec-wise, the 46mm stainless-steel case is waterproof to 50 meters, with smoothly finished stainless steel chronograph pushers. Chopard stands out for using an in-house chronograph movement, and it’s one of few that’s chronometer-certified by the Swiss Official Chronometer Testing Institute (COSC) for accuracy. Impressively, it’s both self winding and boasts a 60-hour power reserve. There’s a glare-resistant sapphire crystal as well as a case-back window to spy the XL’s movement, too.

A subtle extra that’s easy to miss is the date window between 4 and 5 o’clock; we could live without it as it adds a hint of imbalance to the otherwise symmetrical face. Luckily, Chopard doesn’t make the same mistake with the Roso Corsa Mille Miglia logo—it's small enough to only twig in-the-know aficionados to what’s on your wrist. And you’ll be in rare company: only 1,000 XLs will be made, and they’ll come dearly, at 9,660 euros (about $11,000). But, like we said, not everyone appreciates the Mille, and discerning taste rarely comes cheap.