Automakers, from Yugo to Rolls-Royce, are bringing new colognes to market this season. Which eau du moto is right for you? 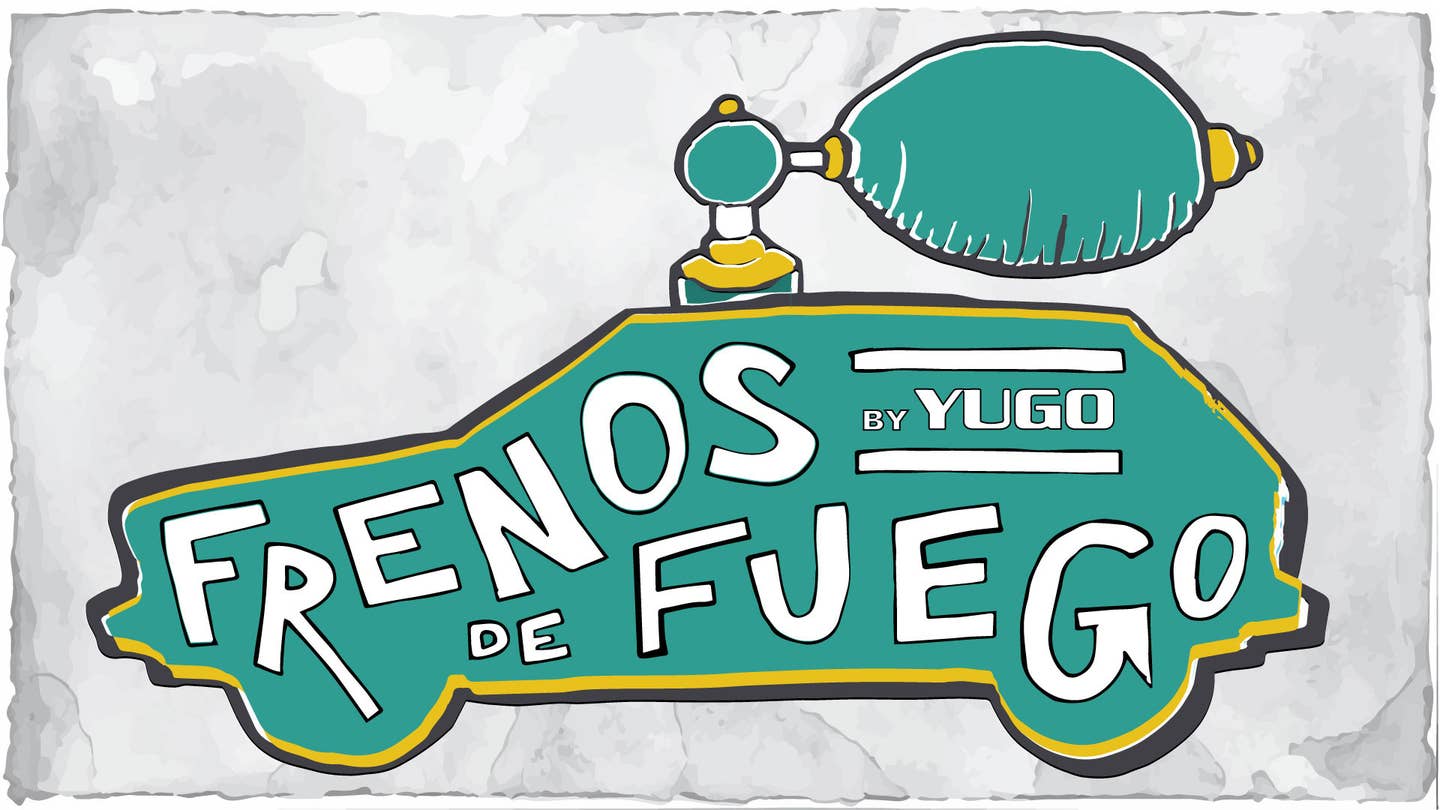 Your scent is a trademark, a calling card left on a lover's bedsheets, or lingering in the nostrils of passersby. Don't think cologne a year-round affair, though. With each season comes the opportunity to reinvent yourself—an olfactory makeover, if you will. This spring, Bentley makes its fruity foray into the luxury fragrance market withInfinite Rush. Plenty of other automakers, from Yugo to Rolls-Royce, are bringing new colognes to market, too. But which eau du moto is right for you? Fear not, The Drive's guide to this season’s top automaker scents is here to help cultivate your own signature scent.

It’s Sunday, and you’ve taken the Yugo out for a drive. That is, you’ve taken the Yugo out of the garage, bolted on the parts that fell off in the night, used the witchcraft of several covens to start the engine and found a downward grade steep enough to achieve a thrilling 24 mph. One hand caresses the brittle, carcinogenic plastic of the steering wheel, the other is enmeshed in the fingers of your beloved. The knot of your hands has fallen into the crevasse between the front seats—a center console was unavailable—where they have stuck. Still, a Sunday cruise is a Sunday cruise, even in a punishing eco-box whose seats give off puffs of moth excrement. Then, it hits: the smell of burning brakes. Babe… is that you? You smile, nod. It’s Frenos de Fuego, by Yugo. But it’s your brakes, too.

From Toyota, comes Cologne, a cologne to be worn by men at the times and places they usually wear cologne. Served in a bottle described by focus groups to Toyota’s delight as “about what’s to be expected,” Cologne’s nose will be immediately familiar. “Is that… Pine Sol?” asked one focus group tester. “No… I think that’s the smell of a Tupperware container when it’s not new, but not old either,” responded another. “Have you ever eaten a paint sample the color of oatmeal? I did, once, and this smells like the burp that followed,” added a third, still not looking entirely well. The color of the stuff is not opaque, but not translucent: the shade of the spit of America’s most mediocre youth soccer players, or the puddles left by a rain that locals didn’t find pleasant, but wasn’t altogether unenjoyable. Cologne is for the man who owns a Yellow Lab and doesn’t know its name, and whose wife doesn’t remember his.

Beauty: It's what drives Jaguars, since Americans aren’t. In celebration of that exquisitive-sconce-forgotten-in-the-attic spirit, Jaguar has released its latest fragrance, Sensual Irrelevance. Bewitching as it is to be unused, Sensual Irrelevance trades in only the finest of beside-the-point pulchritude. For example: the bottle is modeled on the shape of Audrey Munson, once the country’s leading artist’s model, now dead and long-forgotten; the spritzing mechanism is inspired by a lovely pair of nineteenth-century French asparagus tongs. For a typically elegant-yet-trivial scent, Jaguar went to the ends of the earth. To a Chilean waterfall that is supposedly beautiful, though it hasn’t been seen in several decades. To your grandmother’s attic, to swipe dust of the sumptuous Victrola. To Los Angeles, for a vial of sweat from Gone with the Wind starlet Olivia de Havilland, who is actually still alive. The campaign will run this spring. Sensual Irrelevance by Jaguar: You’ll never forget what you can’t remember...

Is Colonialism by Rolls-Royce right for you? The answer is simple: Do you regularly wear a pith helmet and refer to men, women, children, and dogs alike as “old boy”? Does the word “empire” fall on your ears like so many lotus blossoms? Have you ever been, or do you expect to be, accused by townspeople or an international tribunal of “marauding”? Do you stalk through foreign countries with the quick and sturdy step of a man who, were social mores and capital punishment not what they are, take the world, province by province, by force? Long known as the automaker of royals, Rolls-Royce has finally boiled down its baronial essence into a spritz you can wear. Distilled from a potent mixture Henrick’s gin and aeroplane fuel, Colonialism comes in an upholstered pouch modelled after Churchill’s scrotum.

After well over a century of naming, the Ford Motor Company has run a bit dry on creativity. Thus, with clenched stomach and stung nostrils, please greet Blue Offal, from Ford. Made, as expected, from a medley of rotting animal flesh, Blue Offal is sure to stop men and women alike dead in their tracks and then, depending on the length of exposure, kill them. (Indeed, one is instructed to wear l'eau de la carcasse nauséabonde only after securing a trauma-grade surgical mask.) Still, it’s not the worst fragrance in the world. Remember this number, from Sunoco?