It works on your motorcycle. But it’s loved by Hollywood (and The Drive) because it works everywhere else, too. 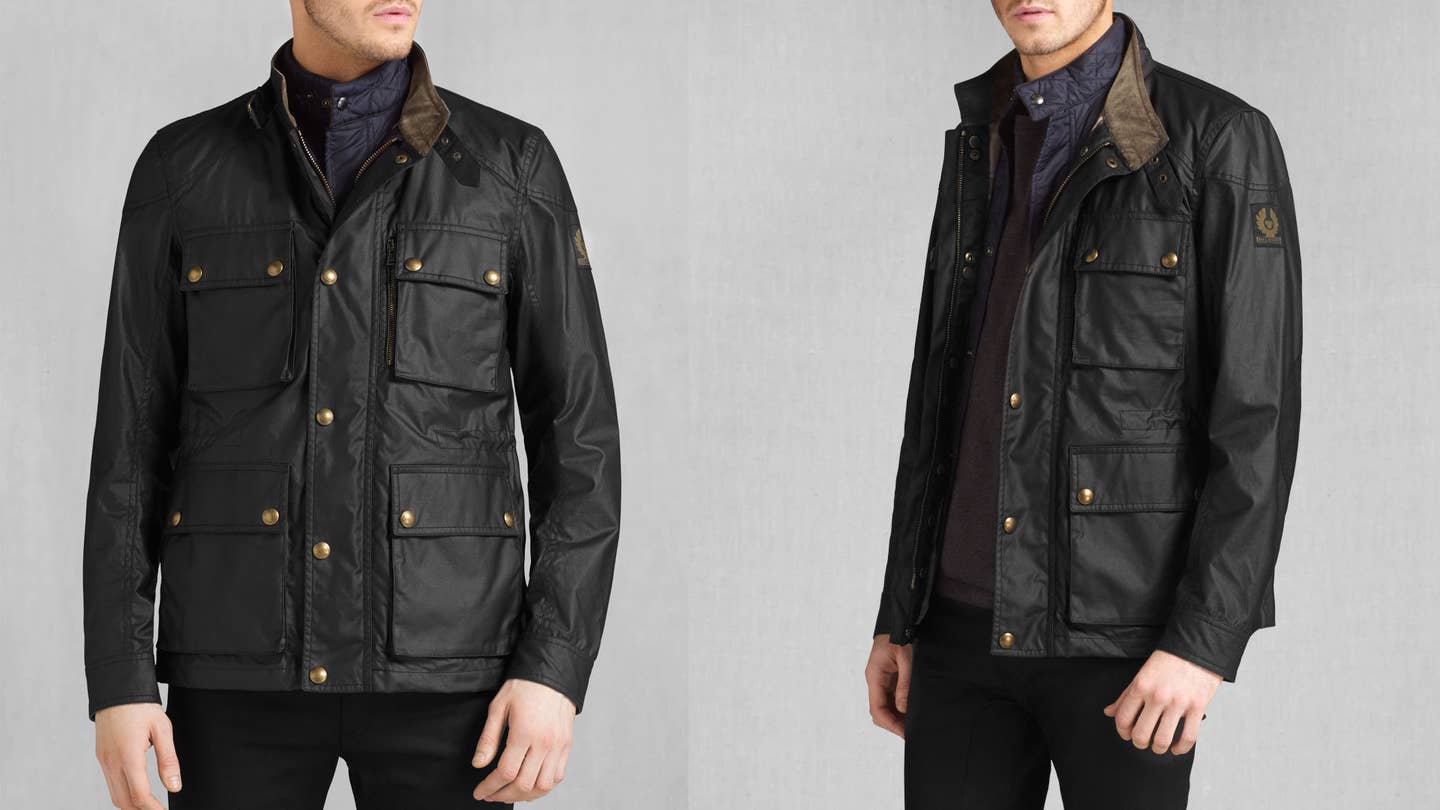 “Belstaff” seems like one of those family names dating back to Shakespearean England, one with a crest of armor and a few knights serving royal courts dotting the family tree. In fact, the name Belstaff is an invention, a merger of co-founder Eli Belovitch’s surname and the Midlands county of Staffordshire, England, where the factory was originally based. It was a nice merger, because Belovitch just doesn't have the proper ring to it if you're trying to sell to members of the British Motorcycle Racing Club during the Roaring Twenties.

Then again, Belstaff was already a known quantity by 1927, when the brand was trademarked. By that point Belovitch and his son-in-law, Harry Grosberg, had a history of producing waterproof fabrics—not just for motorcyclists but also capes, tents, and ground cloths for the British Military throughout WWI.

By the end of the Great War Belstaff’s future had been cemented thanks to the massive number of soldiers who had enjoyed the benefits of the company's ultra-durable clothing. Belstaff took advantage of a booming economy and an era when motorcycles, cars, and airplanes were all the rage to became an adventure gear supplier of tents, camping gear, goggles, gloves, boots, helmets, bags, and a range of waterproof capes—even offering much of that kit bespoke. Belstaff went further, too, in pushing fabric technology. Long before the rise of Gore-Tex, breathable rain-proof gear was impossible to come by. Instead, Belstaff experimented with rubber, creating an impregnated cotton called “beaverteen,” as well as “double-texture waterproof cashmere.”

Eventually, after supplying another generation of soldiers in yet another World War, Belstaff would create the Trialmaster jacket in 1948. Many of the brand's original, functional design cues had been used in construction of jackets up until that point, but the Trialmaster combined everything Belstaff knew into a single piece. The jackets were more comfortable over long rides thanks to pre-bent sleeves, and despite a slim fit the arm-holes were extra large, to prevent binding if you layered beneath the outerwear. Signature touches included a “drunken” pocket stitched on the exterior at an angle, the better to ease consulting a map mid-ride. That feature was cribbed directly from leather coats Belstaff had created for the Royal Flying Corps, but the Trialmaster was made of far lighter waxed cotton sourced from British Millerrain.

Belstaff still uses that same waxed cotton today. It’s tough, patchable if it does fray, and renewable by re-waxing—and because even when waxed, cotton breathes. A good moto jacket has to breathe, along with blocking the wind, since riding, especially in competition, is sweaty work.

What did change over time was the Trialmaster's cut and features Today’s version has split into multiple styles, from the Jubilee, which harkens fairly close to the original, to the a version that that lacks the drunken pocket. The length of the jacket grew or shrank according to fashion of the era, and you can spot vintage versions by their telltale moleskin collar, which today is made of corduroy. Police-only models from the 1970s have extra heavy-duty blacked-out snap fasteners and shoulder epaulettes.

Belstaff is no longer a family run business—it’s joined at the hip to JAB Holdings, which owns everything from Peet’s and Stumptown coffee brands to Jimmy Choo footwear. This may or may not explain Belstaff’s wider appreciation in Hollywood, with their togs worn onscreen by Aaron Johnson as John Lennon in Nowhere Boy and Will Smith in I Am Legend, and by many other actors over the past half decade. (Hilary Swank also wore Belstaff as Amelia Earhart in Amelia, but Earhart did actually don Belstaff flight wear, so there’s historical accuracy at play.) Or we could just be seeing history repeating itself, since Steve McQueen wore a Belstaff Roadmaster jacket in The Great Escape and Peter O’Toole has his onscreen death on a motorcycle while clad in Belstaff as Lawrence of Arabia.

The through-line? Belstaff, then as now, is the quintessence of cool.