An old-school helmet and 283 cubic inches of NASCAR nostalgia. 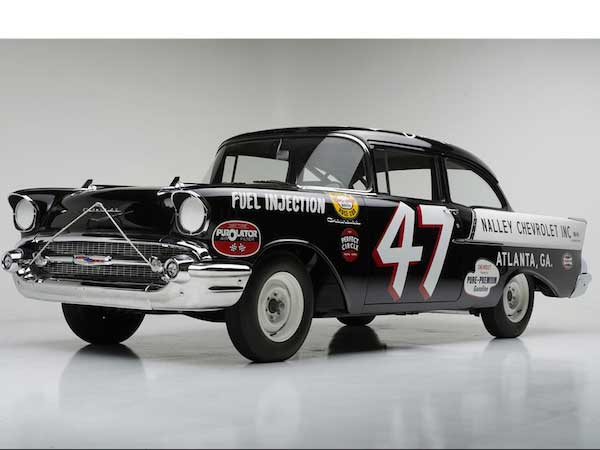 The latest in our recurring series where odd couples become dream teams.

A debate for the ages: Open- or full-face helmet? It’s a matter of safety, sure, but also form and freedom. Any skull-bucket guy will say being isolated from the elements, from the smells and sounds, isn’t worth being at all. Trouble is, functional, open-face helmets aren’t always easy to find. This one from Arai ticks all the boxes. It's vented, with an adjustable peak and removable sunshade. Plus, it’s pre-drilled for a head and neck support (aka HANS) device. Legit.

An open-face helmet is a relic of our go-fast forefathers, too. Foyt. Hailwood. Yarborough. And the lesser-known heroes, like Jack Smith. The man was epic. Smith started off racing local bootleggers across crop fields outside Roswell, Georgia; later, he became an integral figure in early NASCAR, amassing 21 outright wins during a long career. This is his ’57 Chevy. It’s one of the iconic Southern Engineering and Development Co. “Black Widow” cars, immaculately restored, with a 283 cid V8 under the hood and Smith’s No. 47 painted down the door. If you’ve already got the helmet, might as well have the car, right?

Radical housing for canines and an Italian sports car to bark at the moon.