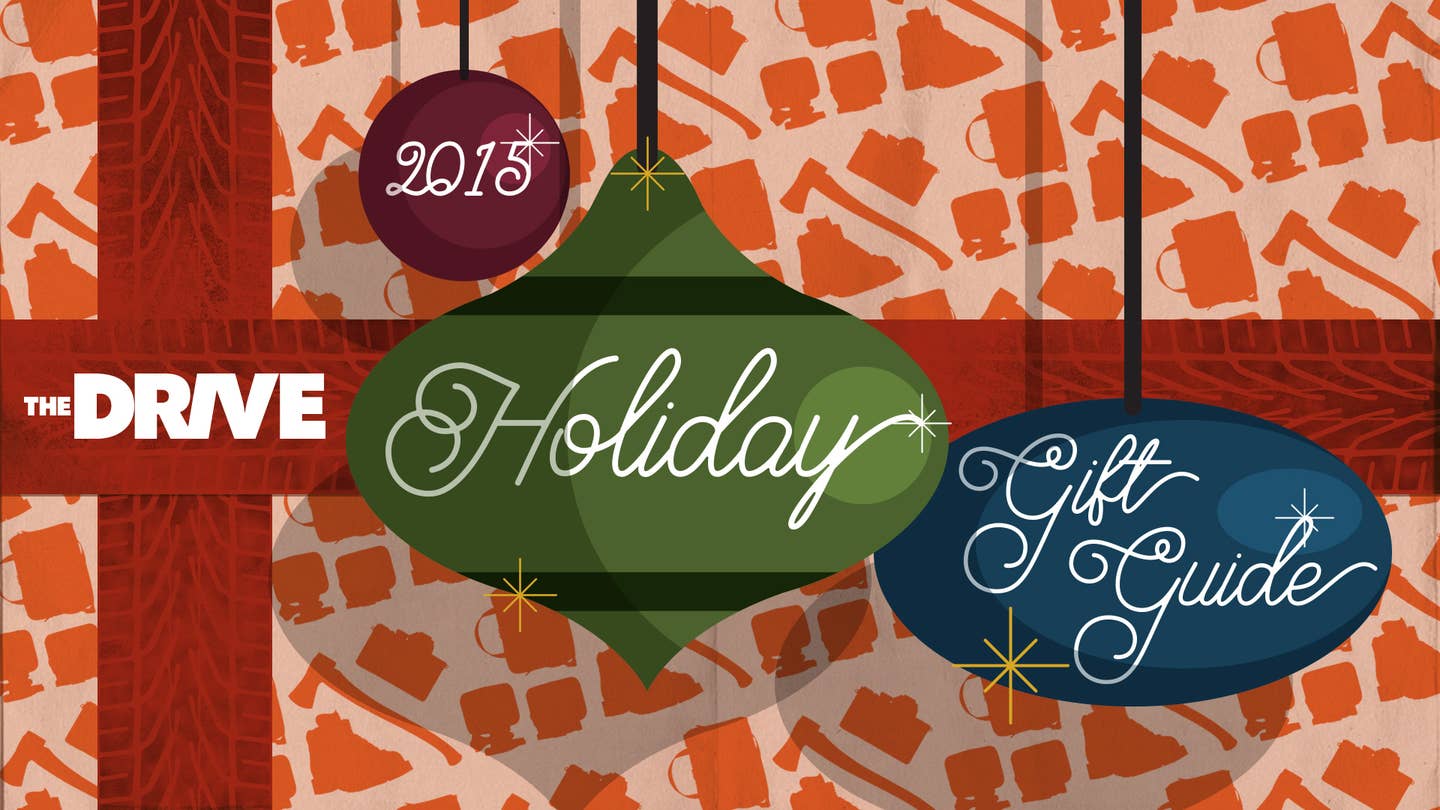 The death of the laptop has been greatly exaggerated but this behemoth tablet boasts a graphics processing chip that can chug through four simultaneous 4K streams and a grip of apps that brings creativity to life for designers, architects, and even lowly journalists. Flip open the smart keyboard, fire up an app, and go.

3-D printed car company Local Motors used the 2-D to 3-D simplicity of uMake on the iPad to craft elements of their prototype. How long will it be until the first mainstream car is churned out on an iPad? Just sketch, extrude, rotate, and export: the files created in uMake can be outputted in a variety of pro-grade formats, from CAD to basic PDF.

Hands-free driving is a noble idea, but until the in-car experience reaches 2005 era interface standards we'll be asking Siri for directions in heavy traffic.

Smart, simple, and utterly addictive, this demure, black device hides in your home or garage like a clandestine pepper mill. At first she seems to be a luxury: in the epoch of the smart home, can't everything be controlled by your phone? But Alexa, as you're meant to call her, grows on you in the best way possible: In the mornings, you'll ask her simple things--"What's the news," perhaps, or "How's the weather looking in Los Angeles?" or even "Tell me about my commute." But oh, how Alexa finds a way into your life. You'll test her: "Alexa, play me the latest episode of Hardcore History by Dan Carlin," and she'll find a way to make you happy. She'll "shuffle John Coltrane" for you on a rainy day, "remind me to pick up bread on the way home," and even "order me more toilet paper" if you've chosen a batch in your recent purchases. And she'll do it all without a tap on a touchscreen--a liberating reprieve from the hegemony of devices.

We've been big fans of cutting the cord since Sonos dropped its first speaker, but this brainy plug-and-play model adds to the allure of the wireless system. Add Sonos' new calibration app to the six wireless antennae, simple touchscreen controls, and meaty melange of mid-woofers and tweeters packed into each unit and you've got the beginnings of your audio arsenal at hand.

The diminutive cousin to our camera of choice for on-road footage, the Hero+ makes it even easier to capture the sublime, the stupid, and everything in-between.

High-end camerawork shouldn't stop with stills. That's why we're packing this multi-tasker, which shoots lush, 42-MP images and excels in low-light scenarios but also boasts five-axis stabilization and 4k, full-frame video. It offers the best of both worlds.

Capturing composed shots on the go can require complicated tripod setups. But this kickstarter project makes it easy to mount a Go Pro, iPhone, or any other kind of camera no matter where you're shredding, driving, or riding.

Leather duffels are a dime a dozen, but this one makes an occasion of any purpose it's put to. The secret? Call it Sterling—or Sir Stirling to you. Caracalla 1947, the Florentine outfit that has all but cornered the market on racing-inspired leather bags and accessories, offers the  Stirling Moss No. 7 Holdall, embossed with the lucky number of Britain's greatest living race-car driver. You could do worse than show up at Silverstone toting a loaf of brown bread,  a wheel of cheddar—and a helmet—in this thing.

Materials matter, when it comes to outdoor gear, and this pair of mountain kicks boasts a Gore-Tex liner and full leather upper. But it's the heritage and history that will keep them on our feet. Danner makes its kicks right here in the United States, up in Portland, and has been doing so since 1932. This pair wouldn't be out of place off-piste, either, which earns them an anchor spot on our boot tray.

Quality driving jackets need not reek of your grandfather's closet. This heritage brand adds a quilted vest layer for warmth and versatility while the Italian herringbone pattern informs onlookers you appreciate the finer things.

First-world problem: Your sunglasses won't stay on your face at speed. This slick pair from French brand Vuarnet grabs onto your ears, making them suitable for drop-tops and open-face helmets alike.

Do you need titanium-framed sunglasses for motorcycling? That depends. Have you ever sat on a pair of shades or dropped them? These won’t break when you do, because titanium is some of the toughest material on the planet. Plus the Explorer is clever as hell—the side curtains block most peripheral light penetration, as well as 80 percent of the wind, but the holes are just large enough so that they’re not creating blind spots. The result is less eye fatigue over long miles. And to help that cause the lenses are both polarized to reduce glare, and photochromic, to adapt to changing light conditions throughout the day. They also look badass, in our opinion.

Tailored cuts with technical fabrics: There's no trend we're backing more in 2016. This waterproof, breathable shell offers a suit-friendly silouhette while a down vest layer within will keep you comfy in chilly temps.

Patina's one of those things that works for some items, but not others. You might like your quarter panels scuff-free, but the scrapes and markes of age will wear well on a briefcase like this one, which is made from waxed canvas and leather.

If engineers can reinvent the car key in fifteen different ways (do we really need another a touchscreen?!) then surely they can apply themselves to the front door of a man's castle. This smart system combines practical keypad entry with a permission slip-style bluetooth and wireless app that lets you lend access for a window of time to friends, lovers, and handymen with a simple touch.

The measure of a cooler is simple: how long can it keep your beer, brats, or anything else cold? We'll chalk the selling point of this one--it's capable of withstanding a Grizzly onslaught--as a nice-to-have.

Made from cast aluminum, this powerhouse grill and smoker offers top-notch heat retention and lightweight, durable construction in one package. Our favorite feature, however, is the ventilation system, which allows the pitmaster to switch between direct and indirect heating with the flip of a hatch. It's perfect for tailgating, and stows away easily in the garage or shed.

Cold weather means fragile skin. This high-tech humidfier means you'll wake up feeling refreshed without having to swap out moldy filters every couple of weeks.

Pour-over coffee is about as twee as it gets: The barista leisurly sprinkles just-right water over your artisanal beans and everyone loses valuable minutes of their lives in an homage to overcomplication. This system means a better brew is just the push of a button away. Bloom, brew, and enjoy--and then toss the filter in the trash.

Smart home solutions are often just plain stupid. Why fiddle with your phone just to flip on a light switch? But this system--bundled with the Amazon Echo--means voice-controlled lights are now a reality. Think of how many times you've forgotten to flip the switch on the garage light, or have your hands full with bags. Now imagine that frustration vanishing with a word or two. We might not have flying cars, but at least a man can feel like a magician.

Anyone who said you were too old for car posters hasn’t seen these. Martin Miskolci, the artist behind Petrolified, makes works of art of the world’s most iconic cars. Picking just one of his simple, but striking, illustrations will be far more difficult than finding a place to put it.

A man needs a better multi-tool. The SOG Switch Plier is a brilliant design, because the gearing magnifies your grip strength, so you get more cutting/prying/manipulating torque. SOG tools are damn burly, born out of US Special Forces supply and made from hardened BG-42 steel (with Vanadium) that keeps extra sharp.

Sweden. It’s a nation with a lot of trees, and not a lot of people. And that was all the more true three centuries ago, when the forge that birthed Hults Bruk axes was born. As such, they know a thing or two about making quality axes like the Kisa, which was designed for both heavier around-camp work, such as splitting, as well as felling trees. The handle is made of extremely durable American hickory, and at 26 inches is about a half-foot shorter than a baseball bat, for enough swing leverage, but not so much length that you can’t control the 1.75-pound steel axe head. The latter is forged narrow, with a rounded edge that’s ideal for cross fiber cutting (acting as a wedge to pry apart split wood). Comes with a leather sheath to protect the axe head.