Match Set: The Jacket and the Car from DRIVE

You don’t need a satin varsity coat and a ’66 GTO, but you probably want ’em. 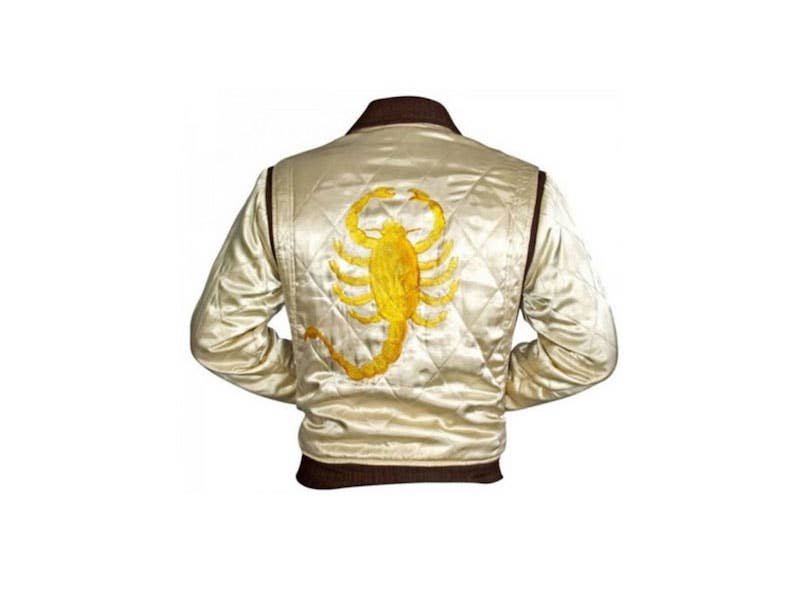 Those who knew Ryan Gosling as a sweet-faced man named for infant waterfowl, or as naught but a former Mouseketeer, were delivered a violent update circa-2011, when Drive premiered.

Drive is a very violent thriller with Gosling at the center as a brooding Hollywood stunt-driver/getaway specialist. Its 100 minutes contain death by shooting, death by drowning and death by kitchen cutlery. Is Ryan Gosling a badass? Unclear, but the matinee idol definitely can play violent.

One of the most memorable takeaways from the movie, besides it moody, pulsing synth theme, was Gosling’s fantastic embroidered jacket. It was, essentially, a white satin varsity jacket, embroidered on the back with a golden scorpion. A garment one might expect on the back of a Latin King, not the toe-headed Canadian from The Notebook; still, it rocks. This replicacan be yours for less than $45. While it does not come with an vestigial Gosling pit sweat, extra YKK zippers and a free dust cover are included in the purchase price.

In the movie, Gosling’s 2011 Mustang GT is the fastest car, but the gold 1966 Pontiac GTO stole the most hearts (in addition to competently aiding an actual heist). While that movie car is still part of Hollywood’s central car casting (Drive was its third on-screen appearance), Hemmings has this blue example up for sale at a reasonable $38,900. The color is a bit friendly for someone who would wear a scorpion-embroidered jacket, and the small wheels look pigeon-toed. We’d repaint in a more Los Angeles scheme—black, gold or white—and fit some tasteful Torq-Thrusts, then hit up a local bank… to make a $20 withdrawal and get ice cream. Of course.

Upgrade your bar car with Titantic-themed glasses, and besmirch your driveway with a Viper pickup.

The Drive gets subcutaneous.

It’s the outside that counts.