Rolex 24 Veteran Scott Pruett Shows Off $600,000 Worth of Rolex Watches

What does a five time Daytona winner do with all those watches? 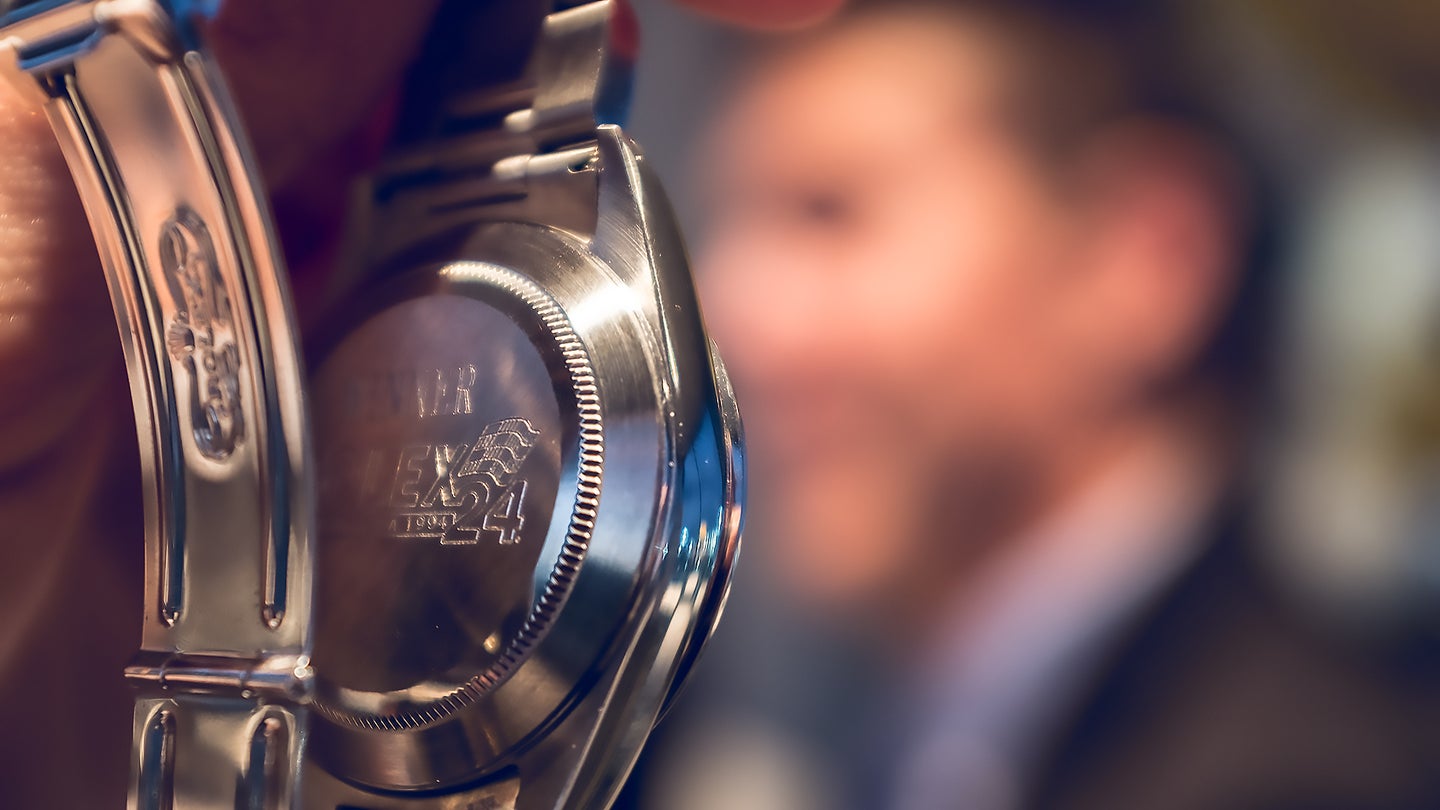 Scott Pruett’s watches show up in a plush box, lined up two-by-four. The kind of digs you’d expect for a priceless coin collection. A man who regularly drives priceless racecars got nervous when he gathered up the eight watches for shipping and learned the bundle was insured for $150,000.

Pruett won Daytona outright for the first time in 1994. He won it back-to-back in 2007 and 2008, topped the podium again in 2011 and notched his latest overall win in 2013. The five victories tie him with racing legend Hurley Haywood for the most Daytona wins. Combined with five championship wins and the result is a well-cemented legend in sportscar racing and a startling collection of hard-won Rolexes.

In a sport with no shortage of traditions and laurels, a race-winning Daytona is a rare practical trophy. Win at Indy and you'll wear a wreath, drink milk from a bottle and have your disembodied head represented in silver on the Borg-Warner Trophy. Win at Daytona and you walk away with a $12,000 luxury timepiece. It's a compelling argument for sportscar racing.

Ties between Rolex and Daytona’s famous tourists run deep. Malcolm Campbell was an aficionado, wearing his Oyster over the sleeve of his jumpsuit for his record runs on Daytona’s white sand. By 1959 racing had moved to the asphalt speedway, and in 1962 Rolex signed up as timekeeper. In 1963 the company started marketing their chronograph toward drivers, and debuted a nickname for the new watch: Daytona.

Winner’s watches are stainless. From the front they’re the very same watch you’d get if you walked into a jeweler and asked for a Daytona. Smaller than trends dictate, and lighter than you’d expect. Four dials. Few frills. Pruett has won watches with both white and black faces. There’s no rhyme or reason to which face goes with which year, or he can't discern one anyway. On the back though, precisely engraved, are the words “Winner Rolex Daytona 24,” followed by the year. Collect enough of them, like Pruett has, and you'll be able to measure time with the back of your watch as well as the front.

A careful eye can spot race-winning Daytonas in the wild. Surprisingly, the math is in your favor. Four racing classes mean four winning cars, with three or four drivers per car. Rolex doesn't hand watches out at Daytona like candy, but more than a dozen winner’s watches enter circulation annually. Wander through an IMSA pit or the garage at an Indy race. Keep an eye out, and you’ll see those characteristic four dials poking out from under a sleeve.

Years ago a friend pointed to 1994 winner Steve Millen's Daytona, soaked in oil and sweat as Millen wrenched on his Targa Newfoundland Nissan GT-R. Despite dating back to the same winning ride, Pruett’s 1994 winner doesn’t show the bumps and bruises of garage life.

2016 class winner Kenton Koch sent a spit-take across the Internet when he suggested on Facebook that he might sell his new Rolex to fund a drive at Long Beach. Born the same year that Pruett and Millen won their first Daytona, the up-and-coming Mazda racer had his fun, then assured social media that they’d been had in an elaborate April Fools gag.

“From a driver’s standpoint, there’s something about the Rolex. You can’t buy one. Some have come easier than others, they’re all difficult, but they’re all cherished.” Pruett says.

More than most, the veteran driver is attached to his watches. He’s bought a few of his own as well. His first, a Submariner bought after winning IROC against a legendary field. It was his coming out as a driver, his introduction to society. Then, after blowing eight engines in two days at the beginning of Toyota’s Indy program, Pruett decided to buy himself a gold Rolex if he could put the struggling car on the pole or take home a victory. After a challenging 1999 season, Pruett put the Toyota at the front of the grid at Fontana with a 236-mph average speed.

At some point all Pruett’s watches get pulled out of the display box and laid out on the table. I do a little math and realize we’re looking at just half of Pruett’s Daytona watches. The collection would make for one hell of a heavy sock drawer.

“How do you decide in the morning?” I ask.

A photographer begins draping them over Pruett’s fingers. Most look gently used. Some still have protective vinyl wrapping on the bracelet. A fella only has two wrists, after all. When his kids turn 21 he passes off a watch. He’s already handed off a Daytona winner to his daughter. It scarcely thinned the herd.

Pruett’s hunt in the 2017 running of the Daytona 24 ends early, two hours into the race. The veteran driver’s Lexus got light, slid sideways. The still-shiny RC F GT3 wadded up hard in the fence at turn one. Pruett’s shot at a class win—and another new watch—evaporate. Just like that. There’s no better illustration of how hard it is to earn a win at Daytona; or why winning a Rolex with a tidy little engraving on the back matters so much to drivers that could easily afford it otherwise—even if they’ve made a career out of doing it.