What's Better Than a Food Truck? A Beer Truck

This beer-filled Ford van is your new best friend. 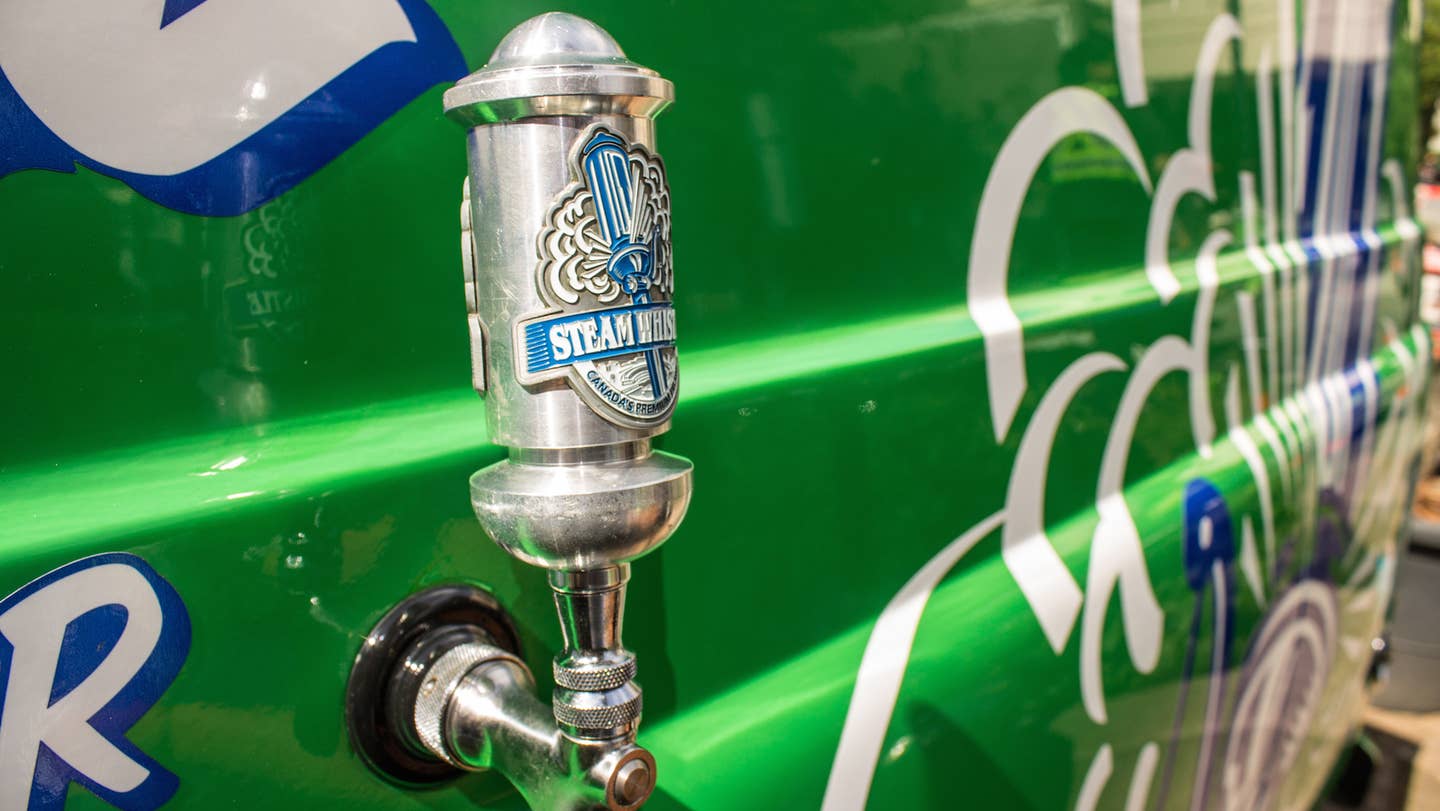 Never mind the Raptor, forget the Focus RS, and to hell with the Shelby GT350 – this is your new favorite Ford. It's a 1967 Econoline Heavy Duty, and beer comes out the side of it. It is, and this is no exaggeration, the single greatest wheeled machine in the history of mankind.

A long time ago, someone invented the wheel. Then, for a time, nothing happened. There were wars, and some peace. But none of that history compares to this.

“Beer,” Ben Franklin is often misquoted as saying, “Is proof that God loves us and wants us to be happy.” And now it's on wheels and can come to you anywhere. Hallelujah.

“Steamy,” for so this chariot descended from the heavens is known, is one of thirteen such vintage vehicles owned and operated by Steam Whistle Brewing, headquartered in Toronto. Every single one is expected to work, and every single one of them is as odd and amazing as the next. There's Shakey, the 1950 Chevrolet Sedan Delivery that used to work for a bakery. There's Retro Electro, a battery-powered 1958 Apache Pickup that does massive burnouts. And then there's Chuckles, a 1956 Dodge Fargo postal van with a Chevy 350 V8 in it. They also have a bus. And a Dodge Tradesman van with side pipes.

There are two of these Econolines currently in service, and they're the pick of the bunch because of the twin tap handles on the sides – the brewery even sells 10-packs of cans in a van-shaped box. While the rest of the fleet is kept back East at the brewery, Steamy spreads the good cheer around my hometown of Vancouver. I met up with Steam Whistle's Lee Brymer at a storage locker south of downtown, and we took the Best Ford In The World out for a drive.

You can trace all this lunacy back to Greg Taylor's dad. A hot rodder of the old school, Taylor Sr. passed along a love of interesting old machinery to his son – to a point. “Keeping thirteen of these things going is kind of a nightmare,” he admits, “People always ask when I'm going to get one of my own – but I like to get where I'm going.”

When Greg co-founded Steam Whistle with his friend Cam Heaps in 2000, the idea of founding a craft brewery was relatively new. These days you can't walk five feet without some guy with a beard trying to force a fruit-infused fresh-hopped Belgian-style saison on you, but a decade and a half ago, the market was wide open.

Initially, a couple of battered old panel vans did haulage duty. After delivering a load of their Pilsner to a graffiti festival, the pair decided to let the artists there paint their vans – why not? On the drive back to the brewery, Taylor watched as people's heads turned and got a brainwave. You have to get the beer to the people, why not make that part of your advertising budget?

“Money was really tight in those early days,” says Sybil Taylor, Greg's wife and Steam Whistle's PR director, “The company couldn't really afford much, so Greg went and bought Lumpy out of his own pocket.”

Lumpy is a 1949 International Stake Truck with a diesel engine and manual transmission. The old truck can haul about three-quarters of a ton of beer at once, and has been doing so for more than a decade. Steam Whistle doesn't run their fleet during Toronto's winter to avoid the salt on the roads, but during the thirsty summer months, all thirteen work hard. Because they're vintage trucks they break a lot; if you're a Steam Whistle employee, you soon learn about more than just slinging beer.

Lee Brymer is the company's West Coast rep, and he freely admits he wasn't a gearhead beforehand. But, getting Steamy to and from events essentially every weekend means he's had to pick up a little mechanical knowledge. The truck is just back from having an electrical gremlin tracked down, and Lee says he's always watching over the mechanic's shoulder, asking questions so he can figure things out himself in case he gets stranded. He cranks the ignition, blipping the throttle judiciously. Steamy rumbles to life without complaint.

The heat coming off the engine cover between the seats just piles on to an already hot afternoon. People are lined up out the door at a local ice-cream shop – every head turns as we pass.

“People are definitely nicer to you in traffic,” Lee says, “The van just makes them smile.”

We navigate beneath the local stadium, hang a right onto a crowded downtown street. The fuzzy dice sway back and forth as we crawl along towards the city's center. At the main library, Brymer pulls the Econoline straight up onto the sidewalk and over onto the bricks next to the patio of a pub. We move a few planters, haul a bar out of Steamy's back, and Lee bolts on the tap handle. It takes just a few minutes, but people start wandering over immediately. Filming is going on just across the street for The Flash and a few of the crew are milling around with grins. “All right!” one says, “It's beer o'clock.”

Soon pints of Steam Whistle Pilsner are being pulled from Steamy's side. I lift the glass to my lips. Here's to you, Steamy, you glorious, beautiful, wonderful, golden machine. You're the best truck ever.