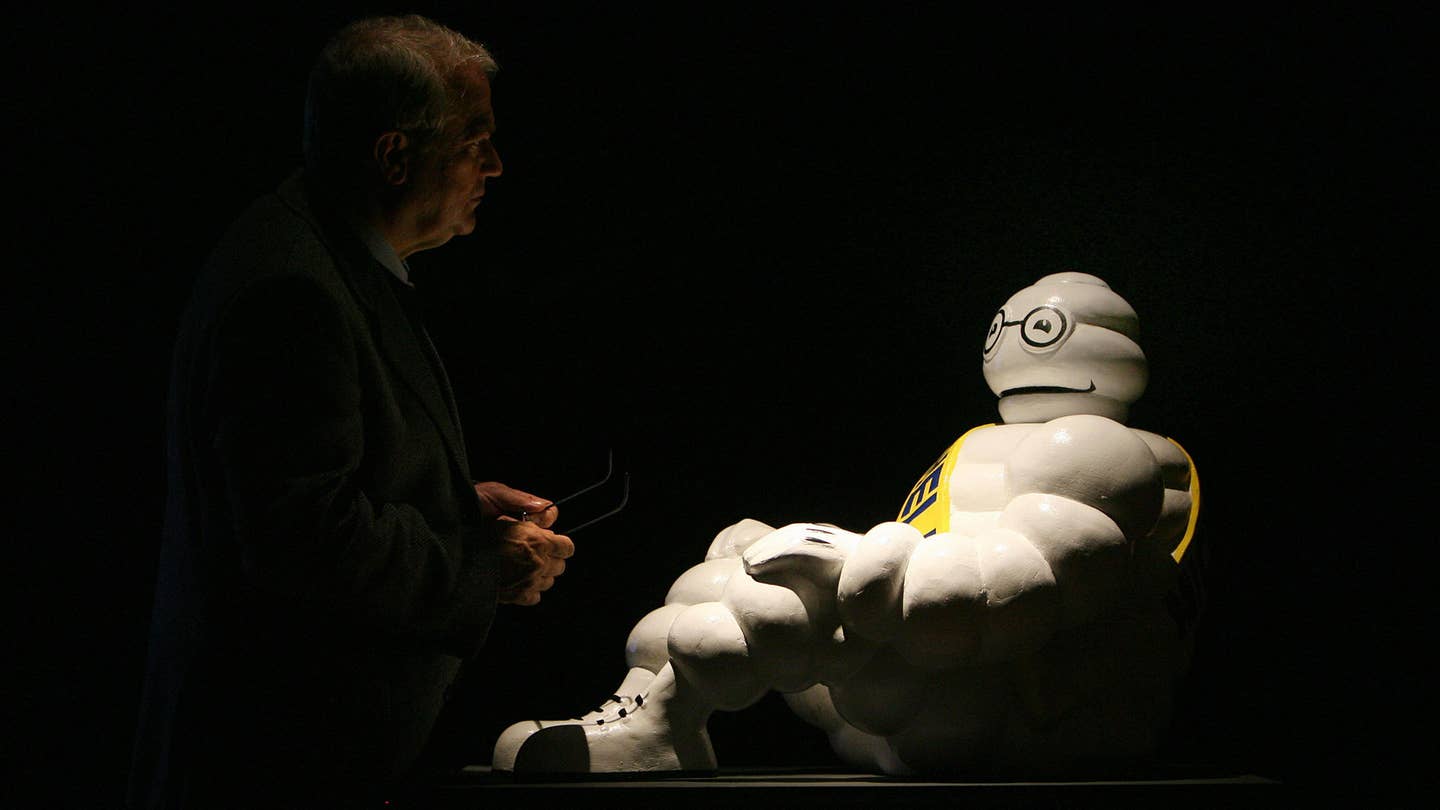 The Michelin Man, like the Stay-Puft Marshmallow Man before his turn in Ghostbusters, is a charmingly obese fixture in our lives. Fluffy, benevolent and concerned only with the quality of the world’s tires, Monsieur Michelin flits through our automotive world, introducing new products and kissing babies at auto shows. He embodies the word “rubber” with none of the sex, “Michelin” without any of its snobby, foodie vibe. Do you want to hug the Michelin Man? Yes. Of course you do.

But things weren’t always this, well, pleasant. Like other institutions with over 100 years of history, spanning the eras from Victorian to Vitamin Water, the Michelin Man has had periods of downright horror. Iterations of creep, menace and grotesquerie. Forget the Babadook; this is Bibendum.

In 1898, André Michelin, one of the company’s eponymous brothers, was at a brasserie (bien sur!) when he saw a poster advertising a local bar, which featured a large, bearded man raising a glass of beer. André decided to co-opt the layout, replacing the hirsute pub-goer with a fat man made of tires—white, as they were then—and his beer with a glass of nails and broken glass. The idea? Just as a drunk slurps down stein after stein unphased, so might a robust Michel tire drink up obstacles and continue forward. Even the slogan on the original poster—“Nunc est bibendum” or “Now it is time to drink”—was reused. This new mascot, this creature, became known as Bibendum.

Though he was created as a creature of mirth, his silhouette was nonetheless disturbing. The man we know today as a roly-poly goodwill ambassador, the Kool-Aid Man minus the mania and cadmium hue, was then a ropy, dead-eyed spectre. Sometimes, he chewed a cigar like villainous robber baron; others, he wore a sinister monocle. (Pupils, and a smile, would come late in the twentieth century.) His arms, rubber-fattened and pendulous, were too large to remain at his sides, forcing a zombie-like raising; the walk, too, recalled the undead. Bibendum, as he sold tires, seemed just as likely to toss a handful of rusty nails into the path of oncoming motorists, then ravage their bodies and siphon their brains once they came to a stop on the side of a dark road in a dank woods.

Today, he’s pristine and smiling, wearing a “Michelin” sash like the winner of a mascot beauty pageant; then, he may have been an instrument of the occult. Next time you find yourself running with open arms to Michelin’s marshmallow, remember: Beneath those folks lurks a menace. Bibendum never forgets a face.