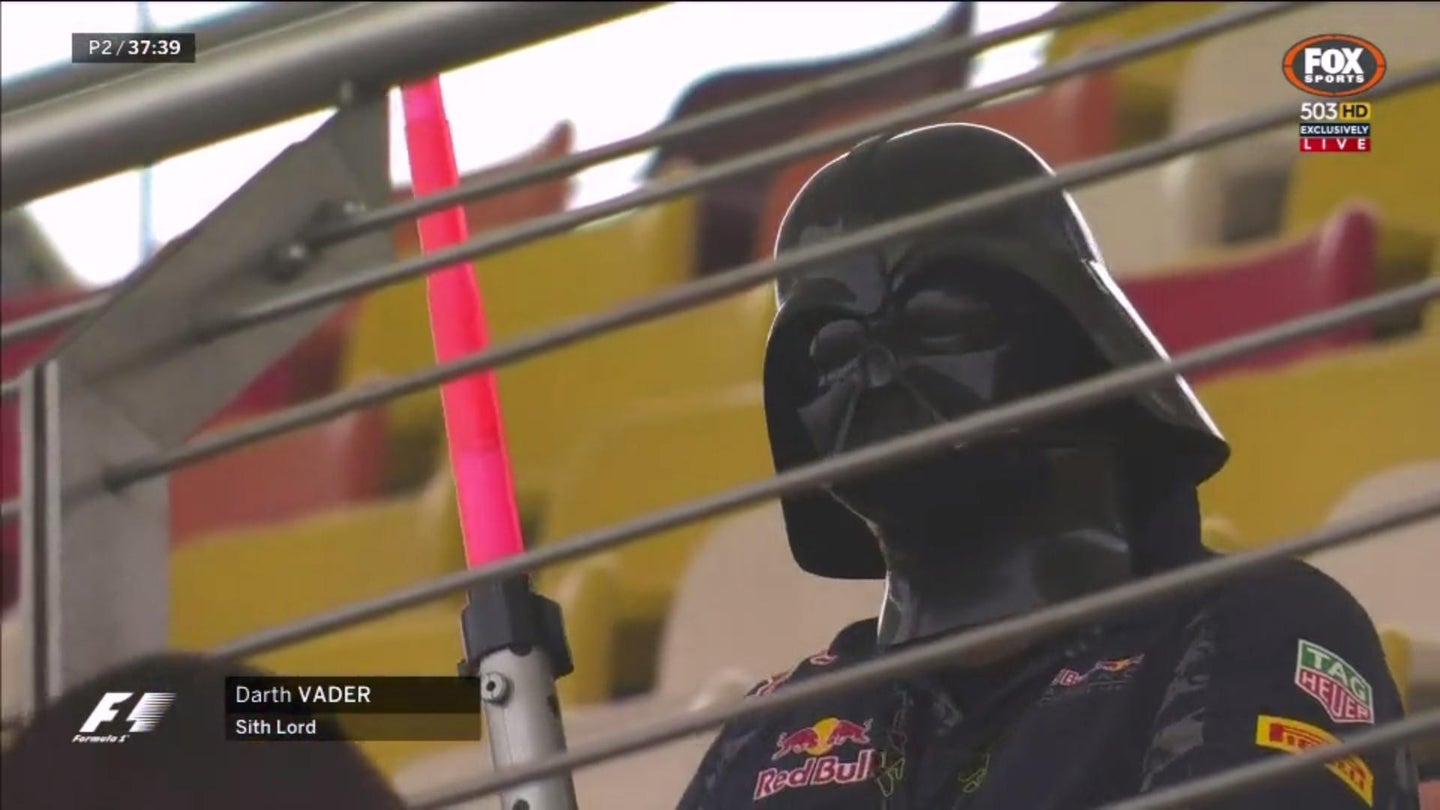 Lord Darth Vader of the Galactic Empire was spotted attending the second free practice session of this Formula One season's Chinese Grand Prix. Vader is presumably taking time off his duties as Sith Lord under Emperor Sheev Palpatine, as he may need to let off some steam after surviving a recent terror attack by members of the so-called Rebel Alliance on a military base orbiting the planet Yavin. The Rebel Alliance used stolen data tapes containing the plans to an experimental space station to pinpoint an exposed exhaust port on the military base, and used guerrilla tactics with a small strike team composed of thirty starfighters and one converted YT-1300 light freighter to drop explosives into the exhaust port, which destabilized the station's reactors, causing an explosion that obliterated the entire structure.

Lord Vader, who has included emblems of Red Bull and Tag Heuer on his characteristic uniform, may have come to cheer on his favorite team, Red Bull Racing, though it is unclear whether he supports Max Verstappen or Daniel Ricciardo. Other spectators in the stands around Lord Vader report he exclaimed, "Now this is podracing," upon seeing the Williams FW40 of Lance Stroll fly past him at the main grandstands alongside the pit straight. Some claim Vader's helmet, brought along to match his Red Bull overalls, was designed with inspiration taken from an insignia on the military uniform of former FIA president Jean-Marie Balestre.

Some in the paddock claim Vader will retire from his military career and instead pursue motorsport in the Red Bull Young Driver Program. He does, after all, have some significant motorsport history and connections that may help him advance toward Formula One if he decides to hit the track. Some unverified reports state he won the 32 BBY Boonta Eve Classic on Tatooine, racing under the name Anakin Skywalker.

His boss, Emperor Palpatine, has some close connections to Formula One management, as before he began his political career as Galactic Senator for Naboo, he went by the name Bernie Ecclestone. Many believe Vader would be unfit for the world of Formula One, as he is regarded as a poor choice for a preseason test driver. This is due to his presumed intolerance of sandbagging, as Lord Vader has a professed dislike of sand.

Vader is reported to have met with members of McLaren's management during the rained-out second free practice session of the day. He is reported to have threatened Honda's Yusuke Hasegawa over the team's poor performance, finishing the pair's conversation with the statement, "The ghost of Bruce McLaren is not as forgiving as I am."

It remains unclear what Lord Vader's aspirations regarding the sport are, though given his Force sensitivity, it would not surprise anyone in the paddock if he made for a top-class Formula One driver.