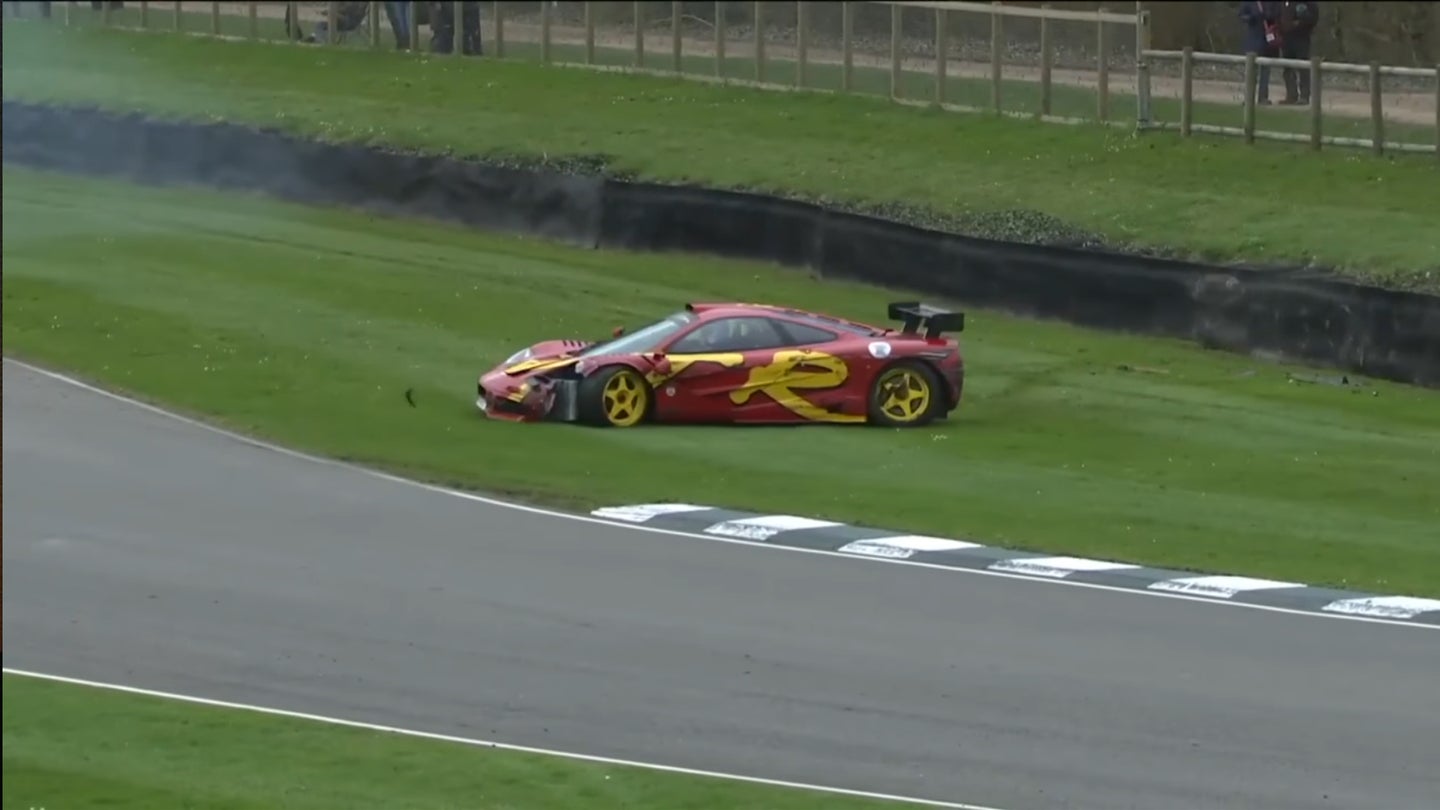 Goodwood Motor Circuit, birthed from an ex-military airfield in 1948, has been a test-and-tune track since the mid-1960s. During the 75th Goodwood Members’ Meeting, Pink Floyd's drummer Nick Mason was in attendance with his McLaren F1 GTR. Unfortunately the car was a bit much for him to handle, as it met the tire wall in St. Mary's corner (which is even regarded as a difficult transition by some). Luckily the 73-year-old driver was unharmed from the crash.

This track, and St. Mary's turn in particular, is no stranger to disaster. In April of 1962, Sir Stirling Moss, former F1 racing driver, had his career ended while taking the same turn at nearly 100 miles per hour after he collided with the wall. Moss, who arrived with an uncertain fate, spent nearly five weeks recovering from his accident in the hospital before being discharged. That being said, Mason was quite lucky to be unharmed after duking it out with the infamous alcove.

The $3.7 million McLaren F1 GTR was towed away as the lap was red-flagged. It is a shame to see any car crashed, let alone something so rare. The platform, which was produced from 1994 until 1998, only had 28 road legal conversions (Mason's car was chassis #10/28), making it even harder to accept that such a rare piece was damaged. This particular chassis was built in 1995, however was the very first chassis to be built to the beefier 1996 specifications which could travel 49km/h over the 1995 varient; an astonishing 330 km/h (205mph versus 175mph). Because it was a development car, it did not race in 1996, but did participate in the LeMans qualifying.

It's also no secret that Mason is also an avid supercar hoarder, who's collection contains a Ferrari 250 GTO, Ferrari 599 GTO, Ferrari F40, as well as a plethora of Aston Martin, Jaguar, and Maseratis. Needless to say, we may have cried a little if the McLaren was replaced with the 250 GTO in this circumstance.

Though the entire accident wasn't filmed, you can still enjoy some footage of a beautiful Ferrari F40 eating up the corners before Mason's crash at 0:30.

Ferrari 250 GTO and Jaguar E-Type Nearly Collide at Goodwood By Kyle Cheromcha Posted in Watch This
Is the McLaren F1 Really the Greatest Supercar Ever? By Will Sabel Courtney Posted in News
McLaren Debuts New Pure McLaren Race Academy For Enthusiasts and Owners By Max Goldberg Posted in News
What's the Difference Between the Exhaust Note of a McLaren 720S and a Ferrari 488 GTB? By Christian Gilbertsen Posted in Test Drives
The Goodwood Revival Shames Every Other Car Show By Lawrence Ulrich Posted in Motorsports
MORE TO READ