And it's dealership equipped! 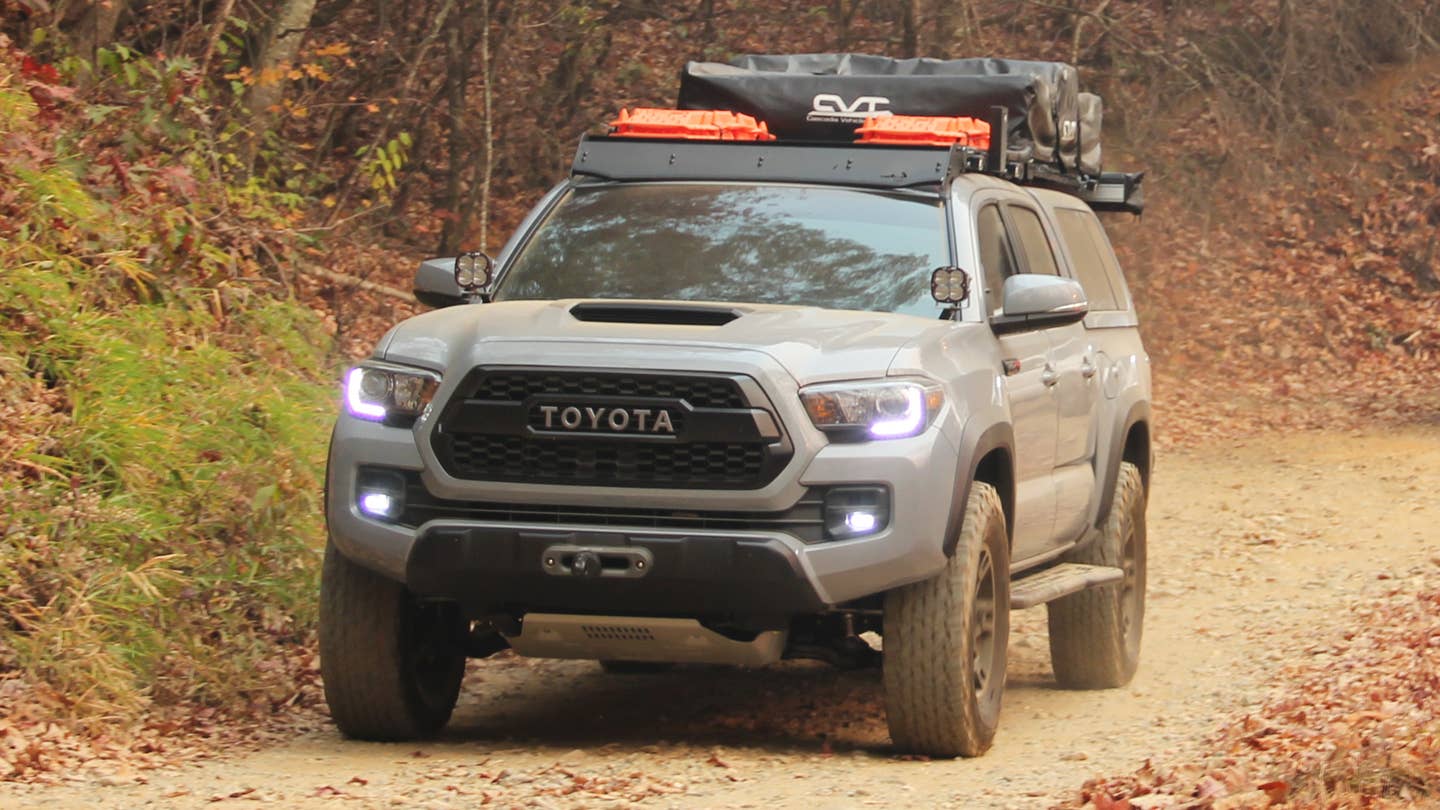 Overlanding means different things to different people. To some, it’s trans-continental travel spanning multiple months, even years. For others, it’s simply taking their trusty rig to the mountains for a relaxing weekend away from the city. The common denominator is vehicle dependent travel with the ultimate goal of simply connecting with the outdoors.

Most overlanding vehicles are weathered to say the least - and for good reason. The amount of abuse these robust rides endure is extensive and ultimately takes its toll in the form of scratches, dents and abrasions. With that in mind, it’s quite rare to stumble upon one of the most sacred, sought-after vehicles in the overlanding community out in the wild; fully-equipped and prepped for the trails.

Last weekend, I attended a ride with the No Limits Overland crew and Expedition Georgia (more on that later). In the midst of this meet-up, a brand spankin’ new 2017 Toyota Tacoma TRD Pro pulled up and everyone’s eyes got a little bigger. Even to the untrained eye, this rig is impressive but to those in the know, it currently holds holy-grail status as far as factory-equipped vehicles go.

The owner, Bobby Hall of Myrtle Beach, SC, hopped out and immediately began greeting everyone. He woke up at five am that morning to make the trek to North Georgia. It didn’t take long to notice that this particular Toyota was heavily equipped with all the latest gear available. Bobby was more than willing to go over his modifications with in-seat tutorials and was both humble and proud of his rig. This warmth and generosity seems to be an underlining theme in the overlanding community.

Another immediately apparent aspect of this particular Pro is the factory color, which Toyota named 'Cement'. This subtle tone is simply mesmerizing in person. The paint doesn’t appear to have a lick of metallic which further implies it means business and its prime purpose is functionality - it just so happens it's attractive, too. To contrast the subdued body hue, the grille, bumper inserts, fender flares and hood scoops are all coated in a sultry satin black. Thankfully, the door handles and mirrors are painted to match the body reminding you this ain't a cheap truck.

Before we move forward, it’s important to look back first. Toyota released the Tacoma TRD Pro in December 2015 and two days later, Bobby placed an order for one. The vehicle was in such high demand, he didn’t even receive the Tacoma until September 21, 2016. That’s nine excruciating months of anticipation. During the delay, Bobby’s garage temporarily transformed into a parts warehouse for the Tacoma. Patiently waiting, he took those nine months to select and stockpile all the latest parts for the build.

To the casual observer, it may appear that someone with such an expensive, exclusive vehicle is simply a guy with a boatload of money that clicked away on his Macbook Pro to build the ultimate overland vehicle. However, that couldn’t be further from the truth. This isn’t Bobby’s first rodeo with overland Tacomas. He’s had plenty of experience that ultimately lead him towards his most recent purchase(s). Bobby’s previous vehicle was a 2007 Tacoma TRD Sport that he fully-equipped for pretty much any obstacle thrown its way.

Before Bobby and his wife, Hannah, got married, the 2007 Tacoma was put to the test via a 40-day, 11,000-mile excursion. From South Carolina, the duo worked their way across New Orleans, to the Grand Canyon, Sequoia National Park and ended up in Huntington Beach, CA. Bobby used that time to discover through trial and error what equipment he liked and disliked, needed and didn’t need.

Bobby attributes his passion for overlanding and Toyota to his wife, whose affinity for the culture and the brand fully transferred over to him. Oh, and she also bought the TRD Pro for Bobby while they were still engaged. So while they were planning a wedding, Bobby was ordering parts.

For Bobby, the appeal of the new Tacoma TRD Pro was its capability straight from the factory. One of the most important lessons Bobby learned from his 2007 Tacoma was that with all the major upgrades he added, the truck lost considerable gas mileage and the warranty was voided in a heartbeat.

“I liked the Pro because it’s the best of both worlds,” says Bobby. “It’s lifted from the factory, you still get good gas mileage and you get to keep your warranty.” He continues, “Plus, if you let Toyota add all your accessories, they’ll warranty it - including the tires!”

That last statement may come as a surprise as it’s quite the opposite of a typical dealership experience. We’ve all been to dealerships that can’t wait to blame aftermarket products on totally unrelated issues. Knowing that there are dealerships eager to get involved with builds such as this one is encouraging and hopefully, this practice rubs off on others.

Bobby’s 2017 Tacoma TRD Pro was purchased from Sparks Toyota in Myrtle Beach, SC, who literally installed every piece of equipment he brought them. Both parts and service went above and beyond the call of duty and if they didn’t know something about the product, they did their research and figured it out. Hey, car dealers, pay attention!

The modification list for Bobby’s Pro is extensive and everything serves a specific purpose. Are some of the items primarily for worst-case scenarios? Sure, but that doesn’t make them a waste of money or the truck any less capable.

As you'll see at the very bottom, the modification list for this 2017 Tacoma TRD Pro is extensive. And while all of the items serve a purpose, the list could get a bit overwhelming. With that in mind, here are Bobby's top three mods to the truck:

It may sound simple, but having your items stored in an organized manner is of the utmost importance. Unloading all of your gear just to find something at the bottom of the pile is not only inefficient, it could get you in some real trouble if the conditions aren’t ideal.

Bobby purchased a roof top tent mainly to get off the ground and away from animals. Thankfully, the CVT tent also afforded them outstanding protection from the elements, ease of use and extreme comfortability compared to a ground-based tent.

Especially with a newer, nicer vehicle, keeping it protected is paramount. Not to say a couple battle scars aren’t cool but you certainly don’t want to completely damage your vehicle if it’s possible to avoid. Bobby says his CBI sliders and rear bumper have saved him from severe, expensive damage to the truck already on multiple occasions.

The future for this Tacoma is open-ended. The next few mods on the list are rock lights inside the CBI tire swing, Magnuson Supercharger (as soon as it’s released) and Nitro 4.88 gears. Bobby and wife also plan on attending the FJ Summit in July 2017 with the TRD Pro and another big expedition with the folks from Goose Gear in August 2019.