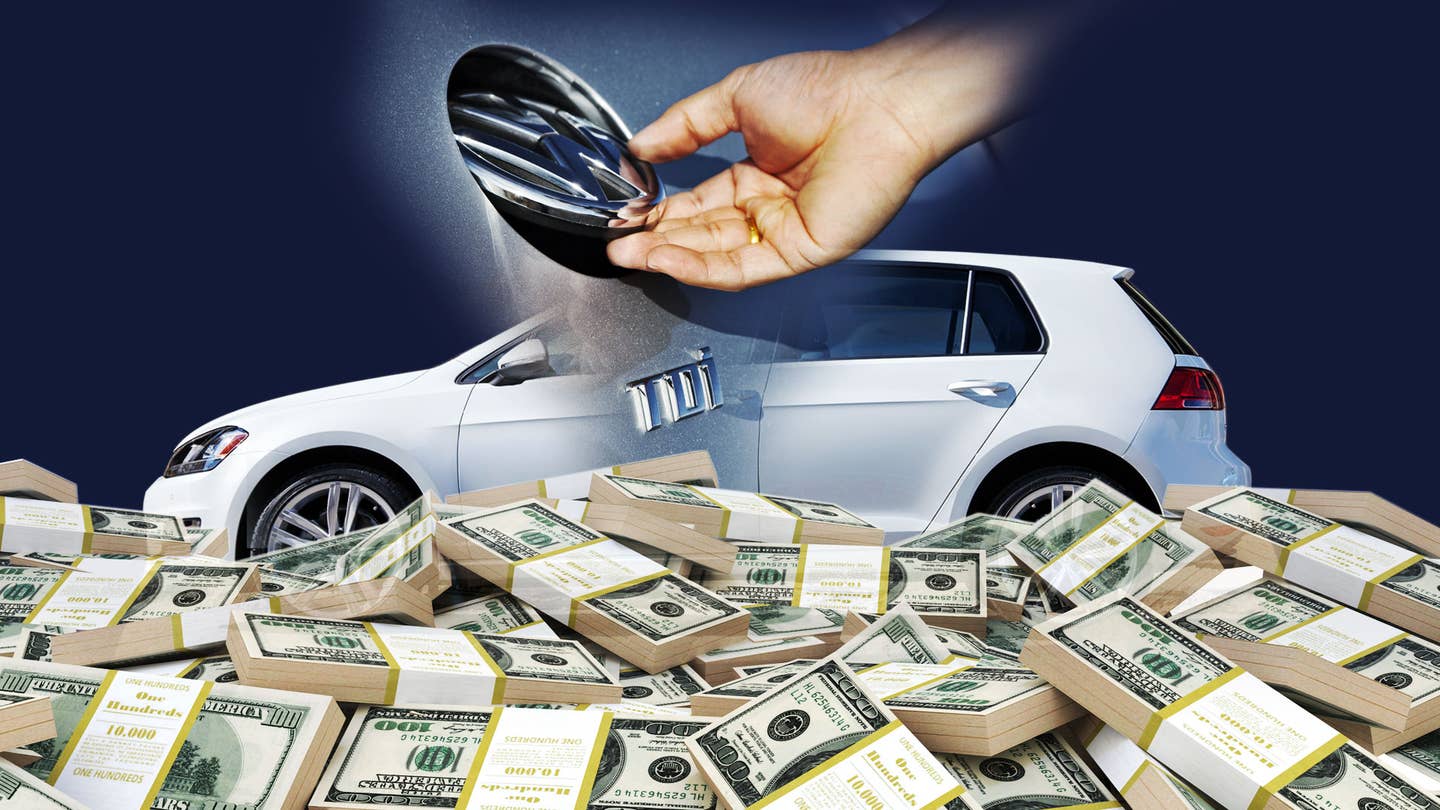 There’s no precedent in the history of the auto industry, or American business itself, for that matter. With a federal district court in San Francisco settling the penance for diesel deceit, Volkswagen will crack open a vault to the tune of $10 billion, and let aggrieved TDI diesel owners clean out every penny. Victims will become victors, in a record-shattering windfall for a consumer product defect.

VW must buy back or fix up nearly 500,000 diesel cars between now and September 1, 2018. But they're forced to pay owners not current market value, but rather what the cars were worth back in September 2015. That’s when VW’s onboard emissions-defeating software was discovered, the EPA charged VW with violating the Clean Air Act, and VW was forced to stop selling its pollution-belching TDI diesels. Owners of VW and Audi 2.0-liter TDIs will receive an additional $5,100 to $10,000 in restitution—a ten-figure, $10-billion apology from a corporation whose hand was caught in the regulatory cookie jar. Combine the buyback and restitution, and owners’ bank accounts will swell by as much as $51,000, that for an owner of a loaded 2015 Audi A3 TDI Prestige edition.

People can spend that money on anything they like, and some seem nearly overwhelmed with the possibilities: Buy another Volkswagen. Give Mazda or Honda a try, or maybe take the electric Chevrolet Bolt. Splurge on a luxury model. Or, don’t buy a replacement car at all. There’s always that kitchen to remodel, the kids’ college fund, or a dream vacation, all expenses paid by VW.

Like so many fellow owners, Emmitt Joe George and his wife Margaret have been mulling how to spend their settlement cash.

“I think it’s a great deal,” says George, whose 2011 Jetta SportWagon will net nearly $25,000 from VW, including a $5,700 restitution payment. “The fact that I can get a brand new car after having one for six years is awesome.”

Volkswagen says that 340,000 owners have already registered online to settle claims, and can now complete the process. VW will open the cash spigot beginning in mid-November, with customers choosing payment via check or electronic deposit.

In addition to $10 billion in owner compensation, VW must also invest $4.7 billion to fight pollution and develop zero-emissions technology, including $1.2 billion for California alone. The company must still come up with an acceptable fix for its 2.0-liter TDI’s, along with the 3.0-liter diesels in 80,000 VW Touareg, Audi Q7, and Porsche Cayenne SUV’s. Buyers who opt to have VW fix their cars in lieu of a buyback will still receive full restitution payments, but only after they bring cars in for repairs. For some 2014 and 2015 models, that will require a two-step fix: a software upgrade, followed by additional hardware at a later date. Those owners will receive two-thirds of their restitution after the initial repair, and the balance later.

George is among owners leery of choosing the repair option, concerned that TDIs might become pariahs in the used-car marketplace.

“If you get it fixed, the car might not be worth anything, with (potential buyers) saying ‘Oh, you’ve got one of those,’” George says.

The EPA and California Air Resources Board (CARB) must still sign off on a fix to bring cars into emissions compliance, which VW hopes to nail down in coming months. Those regulators, VW says, will only approve a solution that doesn’t dramatically reduce fuel economy or performance.

But more than a dozen VW owners I spoke with are all leaning toward taking the buyback. For them, the math seems simple: Let VW pay you to upgrade to a newer, better car, one with no potential baggage in terms of public perception or resale value.

From a purely dollars-and-cents standpoint, one strategy—let’s call it the Diesel Delay—might rule them all. Owners can sweeten the buyback deal by continuing to drive their cars until September 1, 2018. Unless they exceed a 12,500-mile annual limit, they’ll still receive the car’s NADA clean vehicle trade-in value from September 2015. In other words, VW will essentially make their car payments for the next 22 months, buy the TDI back at the end of the “free” lease, and then hand over a restitution check for several thousand dollars more. Under the settlement terms, VW must get 85 percent of the cars off the road, whether through buybacks or destroying the cars . . . but owners can still wait until the last minute to choose the buyback option, even if VW has reached the 85-percent threshold.

Many owners clearly felt betrayed by VW’s scandal and cover-up. Facing potential resale losses, or dismayed by the knowledge that their “clean diesels” were serial polluters all along, owners say they deserve to be made whole. Yet some suggest that the settlement is more generous than they’d dared to dream.

“I understand how people feel misled, but I wouldn’t say I’m super pissed off,” says Vanessa Brown, a television reporter at CBS affiliate KTVT in Dallas. “The $7,500 for my buyback already isn’t bad, and the extra $5,000 is supposed to be, ‘Oh, sorry, we screwed up.’”

“When you put it all together, it’s really a good number.”

Brown traded a Honda Pilot for her 2009 Jetta TDI when she was commuting 500 miles to her TV anchor job in Lincoln, Nebraska, when gas prices were at record highs.

Brown's experience raises another shopping conundrum: the shortage of straight-up alternatives to VW’s frugal-yet-fun diesels. Hybrids can match their mileage, but many are boring to drive, while conventional sporty cars can’t touch a TDI’s fuel economy.

Tina Gammon agrees. The social media manager and graphic artist at Shopswell.com bought a Jetta TDI with her husband, Steve, in 2011.

“Fuel economy was important, but we didn’t want something small, lame, and boring to drive,” Gammon says. “Now, anything we consider is a trade-off. There’s not a whole lot on the market that offers the VW’s package of performance, economy, and how it drives.”

Mercedes, BMW, and now Jaguar and Land Rover are offering diesels, but they’re often too rich for VW owners’ budgets or practical outlooks. Yet, diesel or otherwise, some people are feeling the temptation to trade up to a fancier model and let VW foot the bill.

George had just returned from car-shopping when we spoke, having checked out the new VW Golf Alltrack wagon—but also some Audis, including the 2017 A3 and A4 sedans, the latter impressing with its high-design interior.

“The A4 was amazing, with the brown leather seats and that wood trim,” George says.

Gammon says that “so much money is being handed to us, it’s going to be a whole different shopping process. We will test every conceivable vehicle. We’re car people, we binge-watch Top Gear, but we’re not so naïve that we’d turn down a deal elsewhere.”

Owner after owner, however, said that VW models are still on their shopping radar. Gammon has checked out Mazdas and Hondas, Volvos and Audis, but acknowledges where she’ll probably end up: behind the wheel of a hot-handling VW GTI.

“To be honest, my husband is dead set on the GTI,” even if Tina will be the primary driver.

That kind of talk is music to VW’s bruised-and-beaten ears, as the brand works overtime to keep owners from fleeing elsewhere. Under the settlement terms, VW must take pains to ensure customers don’t feel pressure to buy another Volkswagen, or any hint of a quid-pro-quo to receive their money. VW says that’s why a third-party auditor, rather than a salesperson, will complete settlement transactions at dealers.

“This is the big step to making it right for customers, so we have to make it as seamless as possible,” says Jeannine Ginivan, VW spokesperson. “We want people to feel they can still be loyal to the brand.”

To that end, Ginivan says that dealers will likely ramp up showroom incentives to keep people in the fold.

However people spend their VW windfall, it’s enough to give some owners sleepless nights. George and his wife recently bought their first home in Jersey City, N.J., and they’re considering the wisdom of plowing a portion of their settlement into the household. Either way, George says he’s determined to maximize his value and make the right move.

“We’re talking about cars all the time now, and we never did before,” George says. “We’ll never have this opportunity again, and I don’t want to blow it.”