Strip away the graft and greed, what's left? A lot of cool trucks. 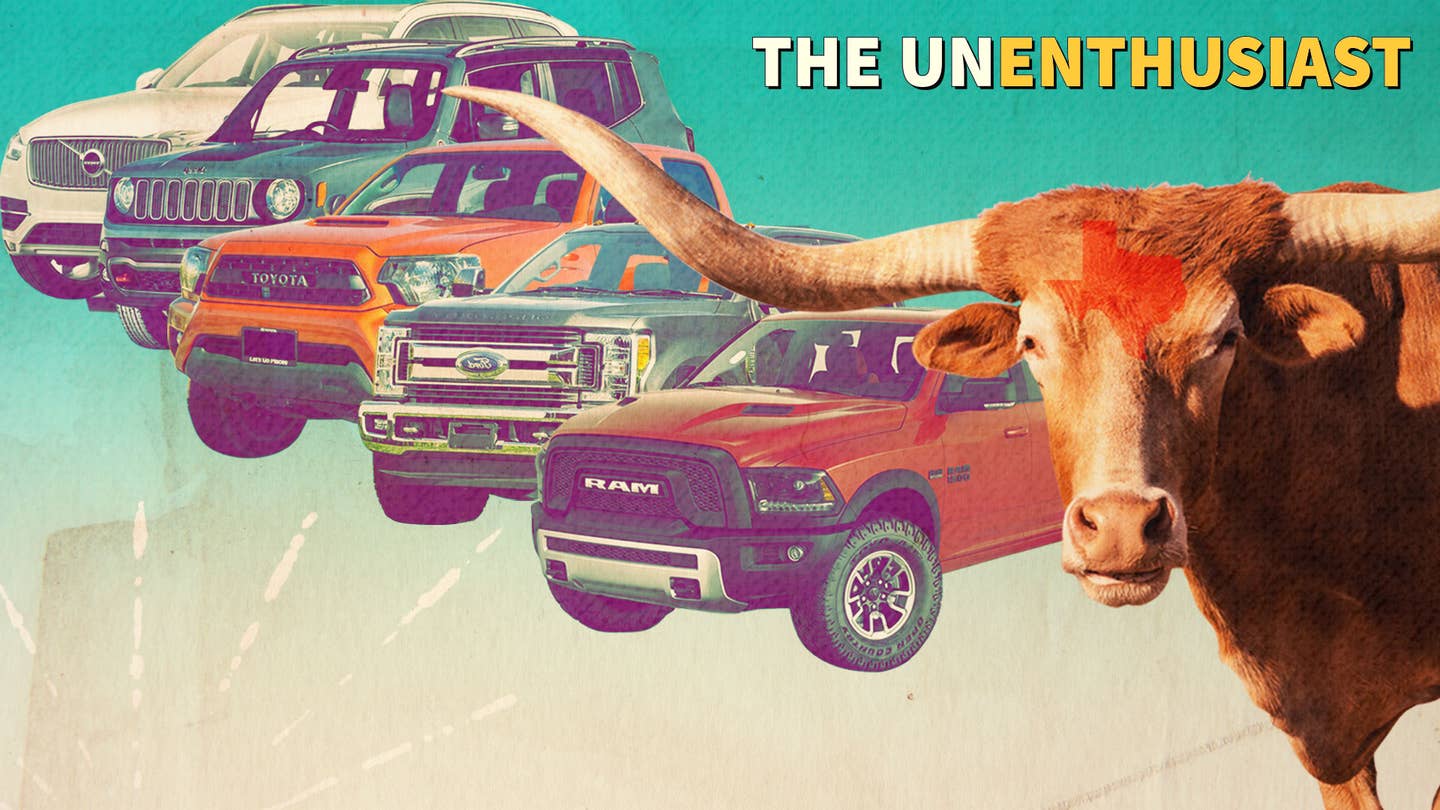 A few years ago, when I was still new to this racket, I went to The Texas Truck Rodeo. I was very surprised to find an event where the journalists ran the program and the manufacturers groveled for the chance for their product to win the covered “Truck Of Texas” honor. The President of the Texas Auto Writers’ Association, tipsy with power, approached me and told me it was “Ram’s year,” and that everyone would be voting accordingly.

Innocently, I published the exchange without realizing that I’d stepped into a historical minefield of graft and ballot stuffing, where auto writers bald-facedly traded votes for favors and free trips. More than one auto PR person emailed me to say thanks for uncovering the corruption. That hadn’t been my intention, but there we went. Now I’d made enemies with gun-toting auto journalists driving 6,000-pound trucks.

Well, no one has run me down yet, and this year was my fifth Texas Truck Rodeo. I’m pleased to announce that full reform has come to the Texas Auto Writers Association. This has zero to do with my non-efforts. I do nothing more than pay my dues every year and then show up to rock-crawl for a few hours. I’m the auto journalist equivalent of someone who only goes to church on Easter to please grandma.

TAWA has a completely revamped board, which is much younger and has a nice mix of hardworking men and women, led by a charismatic young guy from Houston named Nic Phillips who isn’t a journalist at all. He got his start as a Broadway lighting designer, pivoted briefly into digital media, and now manufactures industrial electric engines in Mexico City. He established a secure server for a digital ballot and strictly prevents favor peddling other than the mandatory swag bag. This year, he moved the Rodeo from its old home, which the trucks had turned into hamburger, to a new one, an exotic-animal ranch about an hour outside of Austin.

The Texas Truck Rodeo lasts for two days, but I approached it like I always do: Attend for one day, drive as few vehicles as possible—preferably off-road—and then leave in time to watch most of the Dodgers game at home. Here’s how it works: The monstrous spawn of the truck and SUV industry line up in a semi-circle, tamping down acres of drought-starved grass. Everyone but the foolish ignores the Nissan Rogue. The rest of the journalists immediately plunge toward the Fords and the Rams, which are always the money shots of the Rodeo, and then ramble them over a course full of slicks and moguls and hills, as well as a boring road course. I always try to sample two or three Fords and Rams—Chevy wasn’t there this year because they have nothing new to offer and therefore had no chance to win—plus a Wrangler Rubicon, and also the expensive cars that I never will have a chance to drive again. Befitting my extreme professionalism, I also try to drive stuff that’s new, at least to me, or that I’ve never seen in the wild before.

Yes, I probably should have driven more, but I didn’t want to. For truck’s sake, isn’t that enough?

In my reliable opinion, The Ford F250, which has been completely rebuilt with an all-aluminum body and enough tech to power the Hyperloop, is definitely the car I’d want to use if I had to steal a house. The guy who showed it off to me exhibited a feature underneath the rear seats where you can click a couple of hard-plastic panels into place, creating a long hidden pocket that would be “perfect storage for a firearm.” Or a yoga mat, I wanted to add, but Ford clearly knows its market.

Meanwhile, the Honda Ridgeline has a nifty feature that turns the entire rear cab into a stereo, making it perfect for a tailgate party at the Florida-Georgia line. The Tacoma TRD Pro is a wicked little swift boat that can rock-crawl with the best of them. The Volvo “Excellence” costs more than $100,000 but comes with crystal champagne service, a back massager, and a level 2 autonomous drive system that shows a Cylon-level of evolution. Those were my favorite things.

The day began as I drove a Ram up a steep hill. I had to stop because a line of actual rams was blocking the road, all of them white except for a black ram which led them along, turning every few seconds to glare at me, the truck usurper in its midst. Then the line of animals bolted up the side of a hill, where even off-road tires dared not tread. I proceeded, using 4WD high to ruin the only home they’d ever known.

On every run, a company representative sat next to me, saying “slip bar low differential sequential gear tow capacity especially if you have a boat,” or at least that’s what it sounded like to me. I don’t care about any of that stuff; it’s just fun to drive over rocks. My response was “usually the only reason Jews go off-road is to hide from the Cossacks.” If I got more than a courtesy laugh, then we had a nice ride, and I could proceed with my follow-up of “I can’t wait until trucks are electric and they can drive themselves.”

But here’s my dusty secret: I may dream of a world comprised only of solar-powered pod cars that you don’t have to own, but I do enjoy driving off-road, and because of the Texas Truck Rodeo, I’m solidly average at the activity. “You should do rally racing!” one companion, clearly targeting my vote, said to me. Meanwhile in the F250, far and away my favorite vehicle of the day, my drive companion started giving me rock-crawl instructions, and then said, “ahh, you don’t need my help.” Send me to Baja. I am ready.

It wasn’t my first rodeo, but it was my best. I spent the day eating biscuits and chipotle gravy and excellent enchiladas and kibbitizing with old friends. Then I voted uncorruptedly—unless you count the mandatory swag bag—but only in the categories where I’d driven a majority of the vehicles.

I drove the Texas Truck Rodeo with marginal competence. The fact that I enjoyed myself was disturbing. What’s happening to me? Someone call my doctor. I’ll drive to his office in the Ford Super Duty F-250 4X4 Crew Cab Lariat, and I’ll try not to jump a curb on the way.