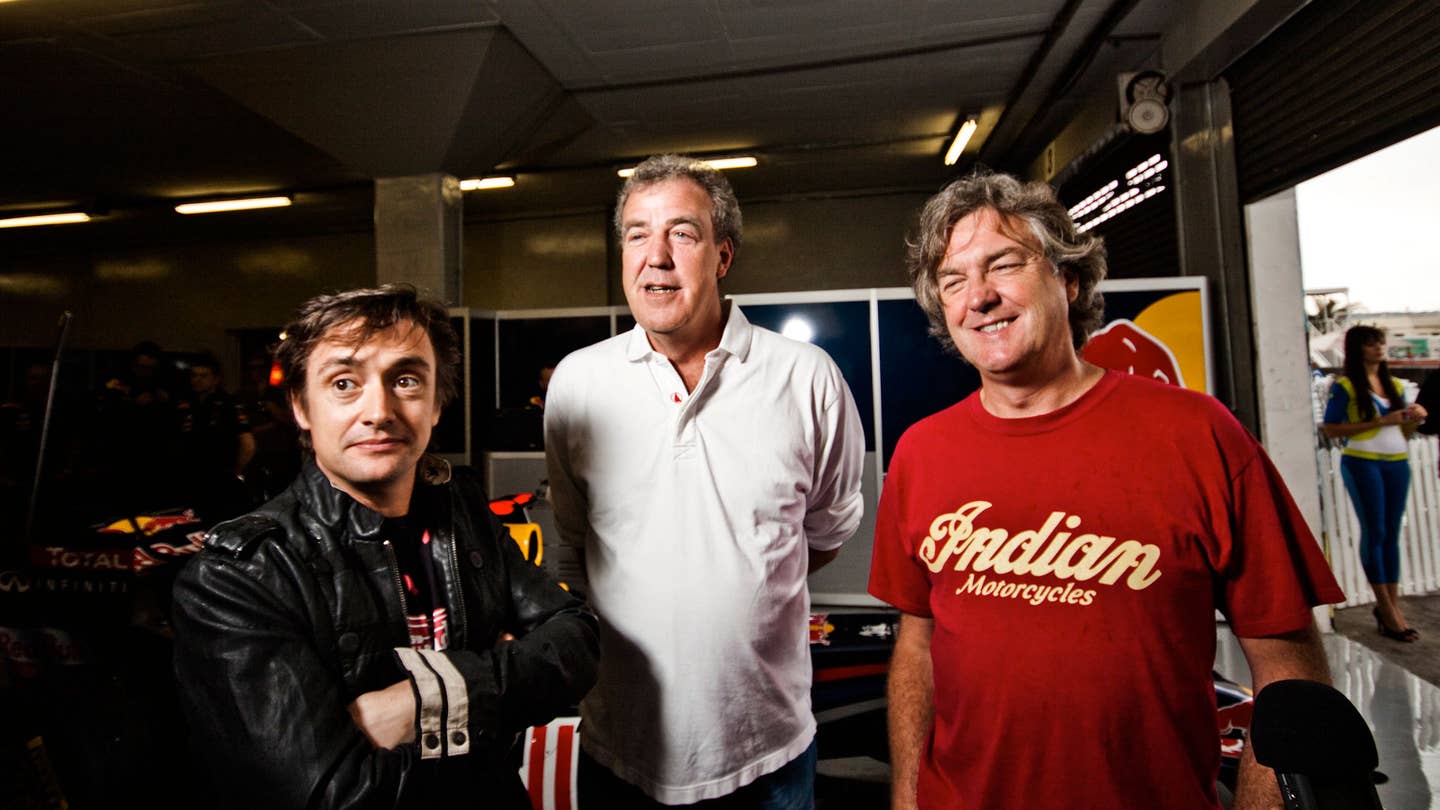 Jeremy Clarkson, Richard Hammond, James May, and the rest of the crew for Amazon's new motoring series The Grand Tour crew taped in Victorville, California, this past weekend. A source who attended the festivities tells The Drive, "It was nothing short of incredible.”

It seems the taping included pieces for both the opening credits as well as the premiere episode. “They called in the big guns," our anonymous source tells us. "There was a heap of cars parked in a semi-circle around the main stage, including a Ford GT, a McLaren P1, a Porsche 919 race car, a pre-war Rolls-Royce with a Spitfire engine, a bunch of rat rods and vintage motorcycles and more. That collection was enough to drool over.”

The crowd, more than 2,000 strong, all of whom had won tickets from Amazon’s online promotion, were bussed into the area, in the middle of a dry lake bed. “Jeremy, Richard, and James were waiting to greet the audience when they disembarked from the school busses,” our source shared. “They were really happy to hang out right in the middle of the crowds for quite a while. They were very cool about chatting with anyone and everyone, signing shirts and memorabilia. The crowd ate it up.” The audience, a “very young group,” was ushered under a sizable tent and given water and snacks while the crew and hosts got ready to film.

“There was a main stage nearby where Jeremy Clarkson’s favorite band, The Hot House Flowers, was playing all day. It was the same song, over and over, but no one seemed to mind. It kept the audience occupied while they got the first shot ready.”

That first shot was a huge set piece that sounds like it will be The Grand Tour's opening sequence:

“It was Mad Max-style. There was a massive convoy of cars staged about a mile out in the desert. A lot of supercars, some cars that had the Mad Max or Burning Man aesthetic, and even some cars from Fast and Furious, including the Flip Car. One of the rat rods had a huge, 600 cubic-inch motor with three superchargers. The fleet was astounding. Jeremy, Richard and James were in the three lead cars, coming in like an arrow, in front of this insane lineup. A camera crane car was in front and a camera helicopter was flying over.

“The band would start playing and the producers would get the crowd riled up and the convoy would speed towards the tents. They did about five takes before moving on and it took about 45 minutes, but the crowd never complained; it was pretty cool to see.”

Next, Clarkson, Hammond and May did their introductions. “It was clear the censorship from the BBC-era was gone. They made full use of the fact that they’re now an Internet show, without the typical limitations,” our insider said. “One of the more risque introductions was, ‘This is the man guys in prison refer to as ‘the socket,’ not ‘the plug.’ As the takes went on, the guys got dirtier and more crass, with increased cursing.”

Amazon’s lawyers, understandably rather nervous about getting sued by the BBC over a host of potential issues, had a chat with the trio and their producer, Andy Wilman, about topics and issues to avoid completely. However, in traditional form, we're told the hosts worked in a nice slight to their former employer. “Each of the guys introduced the others by mentioning all the jobs they’d been fired from. Hammond had been fired from a Volvo dealership, May had been sacked from this media job and that media job. Then they got to Clarkson and quipped that he’d never been fired,” our source laughed. “There was no specific mention of BBC, but everyone in the crowd went wild. They definitely got the jab.”

While there was nary a mention of Top Gear, or Chris Evans, or any of that, there were a few topical jokes, including one about Clarkson “having sex with Hillary Clinton. Donald Trump didn’t come up, though.” Clarkson also kept introducing a montage of highlights from the coming season. “There’s some bonkers stuff in the clips they previewed,” our source said.

There was one final surprise before the festivities ended: the Breitling Jet Team did a flyover towards the close of the day. “They kept it quiet, so it was a big surprise the first time. However, they wanted a few more takes, so the producers asked the crowd to keep their energy up for the fourth fly over.”

If this is any indication of how grandiose the inaugural season of The Grand Tour promises to be, we can’t wait to see the show kick off this November 18th on Amazon Prime.