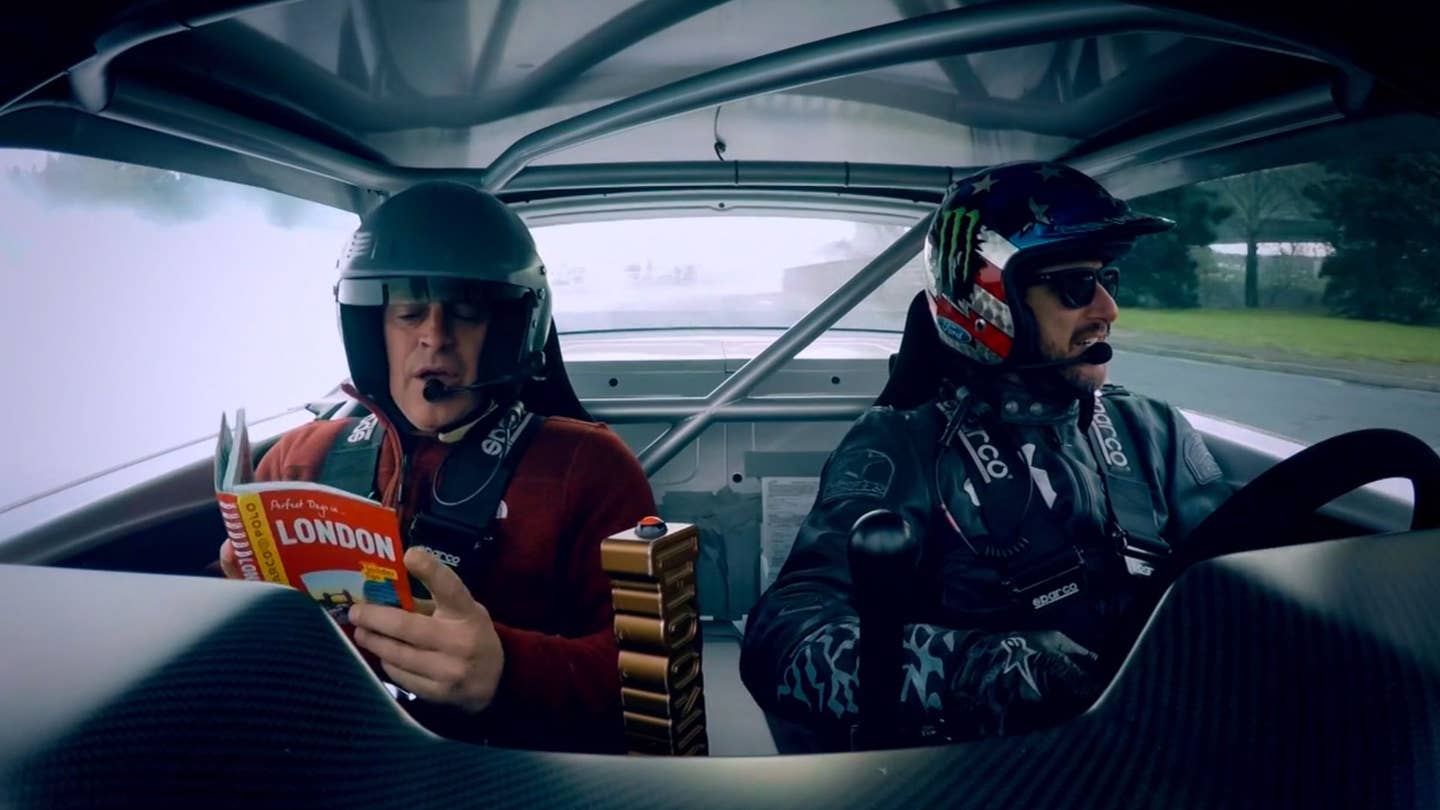 The first two episodes of Top Gear were universally loathed, evidenced by the continually plummeting ratings, a fact that Chris “CAN YOU HEAR ME NOW?!” Evans continues to try to spin. However, the third episode leaves us with a smidgen of hope that the show can find its footing. Chris Harris drives. Sabine Schmitz drives. Rory Reid drives. Matt LeBlanc’s dry humor shines. And, most importantly, and mercifully, Evans has less screen time. (To be fair, he’s also more palatable than before.) Below, our various musings from the episode.

Does Chris Evans only own one outfit? What does this guy’s closet look like? Is it like Homer Simpson's in its sameness—just a slew of the same yellow t-shirt alongside ratty blue jumpers and a stack of whitewashed mom-jeans? When Brick Top turns up in his tired ensemble, does no one from production suggest, “Hey Chris, maybe wear something else today?”

The V-10 Audi R8’s computers are no match for Sabine Schmitz. Evans gets first crack at the new Audi coupe. He’s still all shout-y while presenting, but at least he’s hollering specs for once. That naturally-aspirated powerplant, ripped from Lamborghini’s Huracán, is good for 600 ponies, screams to 60 mph in 3.2 seconds, and maxes out at 205 miles per hour. The all-wheel drive German rocket—the fastest road-going Audi ever—showcases its phenomenal gripping power, the same bite that makes Evans look capable of handling it...which rightly begs the question of whether it’s too friendly to be an authentic supercar. Enter Schmitz, and exit Evans’ breakfast. Schmitz bangs the duo around Laguna Seca for two laps. The first is with all driver aids enabled, leaving the car in charge of when that seven-speed, twin-clutch gearbox shifts, throttle modulating, et cetera. The second lap is all Schmitz, who rails the car so hard Evans hurls. The results: Schmitz is seven seconds faster without the computer’s help.

Chris Harris’s debut is simply brilliant. That lucky bastard starts out in a 250 GT Berlinetta TDF. He walks us through the history of the Tour de France while driving one of the only 77 250s ever made. If that doesn’t induce your green-eyed monster, you’ll shout incredulously when he noses the 250-horsepower, 3.0-liter V12 onto Circuit Paul Ricard for some laps. But even he’s cognizant of what a treat it is to throw around $7.1 million worth of steel on a race track.

Harris comes alive with a Ferrari F12tdf. Tasked with testing the 770 horsepower monster, Harris creates an incredible film. There are a few reasons for this. First, because Ferrari provided the vehicle for Harris. Remember that, after Harris called out Ferrari for being jerkwads with their press loaners, he was blacklisted. As Jalopnik notes, he’s driven some stallions since the ban, but this is a big step forward. Next, as Harris whips that naturally-aspirated V12 into a frenzy, we get all the controlled slideways action we’ve longed to see from Harris on this program. Yes, yes, yes. The furious steed spends the bulk of its screen time in a drift, while Harris tells us he hasn’t driven a car that wants to oversteer more readily. He concludes that the F12tdf is a “difficult car to control, but would you want it any other way? All supercars can now be driven by complete idiots.” (TAKE THAT, CHRIS EVANS.) He goes on to say that "the world needs cars that are difficult to drive.” We sure do. And we need you behind their wheels, Mr. Harris.

Kevin Hart makes the Stars in a Rallycross Car segment tolerable. The comic is paired up with heavyweight boxing champ Anthony Joshua. After we get past the unbearably awkward bits where each man plugs the other’s forthcoming project, this portion settles down into a decent little interview, mostly thanks to Hart’s self-deprecation. Hart’s first car, a 1980 Pontiac Trans Am, trounces Joshua’s Vauxhall Astra (the U.K.’s third-best selling car ever).

Hart’s current garage is as diverse as it is great. Among his fleet: a 458 Italia, a Merc SLS, a G65, ANOTHER G-wagon, a Merc convertible, a first-gen Mustang, a Wrangler Rubicon with a lift kit and side step—“so I can climb in!”—and a Jet Sprinter Van equipped to be a mobile office. The best car he currently owns is a 1966 Pontiac GTO, which he snapped up because his father loved the marque so much. Noting his dad had been in jail or rehab Hart’s whole life, this was a testament to his father, though he still refuses to let his father anywhere near it. Joshua bought his mother a Range Rover Sport, and that benevolence triumphs, giving the champ a victory in the second round.

Both Hart and Joshua can drive. This was the most dramatic rallycross lap we’ve seen yet. Hart fires off, quoting Ricky Bobby (“Shake ‘n bake!”). But he’s able to back it up with some impressive wheeling. Ditto for Joshua, whose lap looks even faster, though both are quite quick. Joshua snags the win, and top board positioning, nudging out Damian Lewis.

The Ford Focus RS is so capable, even a child can drift it. And Rory Reid, in his main show debut, gives one such lucky lad that precise opportunity while comparing hot hatches. First, we’re walked through that Cosworth-tuned 2.3-liter turbo Blue Oval. Its 345 horsepower means a sub-five-second zero to 60 time, “quicker than a Countach,” Reid notes. (Probably not a great point of comparison, but whatever.) Reid breaks down how the Focus RS portions 70 percent of the power to the rear, then employs a dual clutch to enable torque vectoring to individual wheels to help it get all slide-y. But why describe what you can show? Cue a heap of rain-slicked massive drifts. Reid then claims the Focus RS is so inclined to kick out, a kid could manage. Cut to a youth holding an oversteer as well as Tanner Foust.

The Focus RS makes Mercedes-AMG A45 and Honda Civic Type R pale in comparison. For the first time this season, we’re treated to some overseas-only cars, which, for some, is part of the appeal of Top Gear—seeing things we Americans don’t have access to. The Civic Type R looks the most aggressive, with that huge rear wing, though the front-wheel-drive car is not much of a match for it’s all-wheel drive counterparts despite having more power. The 376-horsepower A45 ticks all the right boxes, including highest horsepower, a faster sprint to 60 (4 seconds) and even wins the drag race. But Reid declares it “dull,” especially compared to the Ford’s tire-vulcanizer.

The presenters’ post-film banter needs finessing. It’s great to see the full cast being utilized, but the scripted crap in front of the studio audience after the segments is still supremely lame and comes off forced. Reid and Harris’ bits are no exception, though Schmitz’s felt slightly more natural.

Matt LeBlanc only gets one segment, but it may be the best of night’s. Chief among LeBlanc’s talents is his comedic timing, and that strength is played to so damn well in the bit with Ken Block. Just hearing the premise that LeBlanc will employ Block as a tour guide through London, using the Hoonicorn as a chariot, elicits a chuckle. (Though it didn’t when it was filmed. Remember the uproar from the U.K. about leaving rubber around war memorials?) When LeBlanc gets into the bit, leafing through guide books while dryly pointing out the sights as Block, stone-faced, screams around London, it will force more than a few laughs to escape your lips. Joey Tribiani’s still got it, folks. Block and LeBlanc are a far better pairing than Block and James May. Lastly, can BBC please actually produce that “Stigsy” image as a poster? Would buy.

What did you think of the episode? Let us know below in the comments.