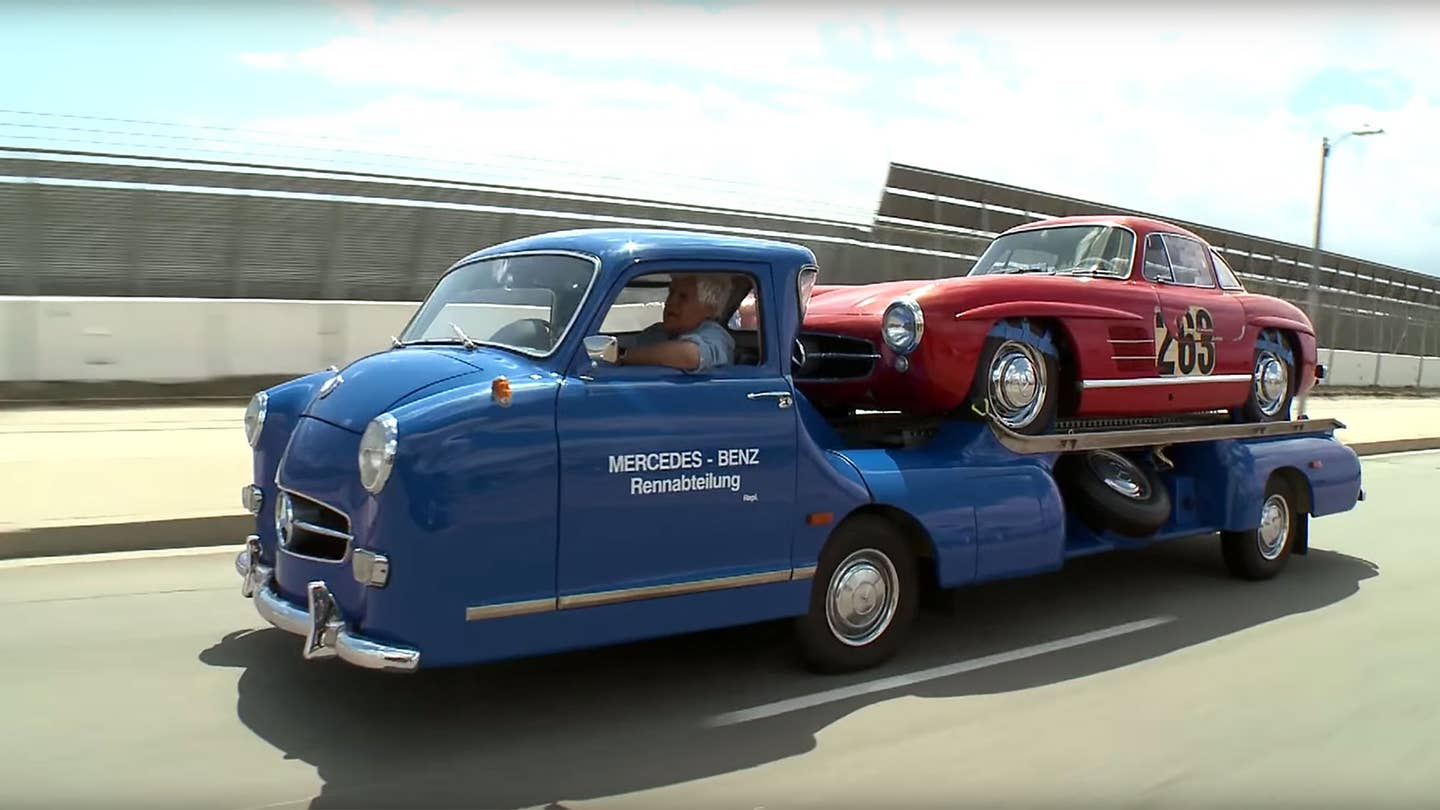 This week on Jay Leno’s Garage, the four-wheeled star is a replica 1950 Mercedes-Benz race car transporter, a properly stunning piece of sheet metal. Those lovely swooping lines, that incredible cab-forward overhang, the overall sleekness of design; this is a vehicle that will give you a visceral tingling on sight. And, for about 13 minutes in the video below, that lustful feeling goes strong—until everything comes to a (literal) screeching halt. When Leno and his crew try to show us how to offload a car—a 300SL Gullwing, in this case—they scrape the absolute bejesus out of the bottom. It was bad enough to make seven staffers gathered around a monitor in our office let out a collective gasp.

More on that in a second. First, let’s talk about that beaut of a truck. Back in the ‘50s, ze Germans hated fixing their race-bombs trackside, instead preferring to wrench the cars back at the factory—which was close enough given that the bulk of racing was going down in England, Germany, France, and Spain. To ferry the four-wheeled patients to the operating room required the quickest ambulance ever. Thus, Mercedes built the world’s fastest transporter, fitted with that prodigious 6-cylinder, fuel-injected 300SL engine—the very same powerplant found in many of the cars catching a ride on the back. It had a top speed of 108 mph and would drive full-tilt straight through the night to the factory, then turn around and return the car for the race the next day. It was an incredible machine, and there was but one of them, so imagine the outcry when it was crushed in 1967.

So heartbroken were Mercedes fans that the manufacturer later built an exact replica (at a cost of nearly $2 million), which is now housed at the Mercedes-Benz museum for all to enjoy. One enterprising Swedish gent wanted his own replica, and so began building one. He passed away before it was fully finished, so Leno bought it and finished the work, noting the fellow did a “wonderful job.” This replica is missing the 300SL engine, because “that would’ve been very expensive,” and instead uses a mid-Eighties 2.4-liter 4-cylinder Merc truck engine. That’s more than capable to get the 4,600-pound truck hauling, even with a coupe on top. It won’t do 108 mph, but it will get up to 70.

The build quality is incredible, and Leno flips through a photo album to show the progress. “This is what you do when you don’t have Netflix,” he wisecracks. “You actually build things.” Nearly everything was fabbed from scratch, modeled from diecast toy cars and photos of the originals, and incorporates bits of an early 190 donor car. Leno’s additions were all functional: air conditioning, storage bins, better air suspension, a hood door to access the radiator. Leno also added “repl” to the doors, so as not to posture. The whole process took about a year and a half. The comedian takes the viewers for a spin, which looks fun and perhaps a bit unconventional, given how far forward that cab actually is.

Back in his garage, Leno says they’ll show us how they remove the 300SL (also Leno’s). Now, while the paint job on that 300 is indeed heinous and in need of repair, what happens next is still cringe-worthy. The ramps shift and—while they’re pushing the 300 back—it bottoms out and gets raked over the top of the tire rail. Leno catches it and has the car tugged forward, only to scratch the poor coupe further.

“That’s the good thing about a crummy paint job,” Leno quips, adding, “We haven’t done [this] in a while, heh, so it got a little crazy.” We’ll say. Props to Leno for not editing that gaffe out of the final cut, but still,that poor SL. Check it out, below.