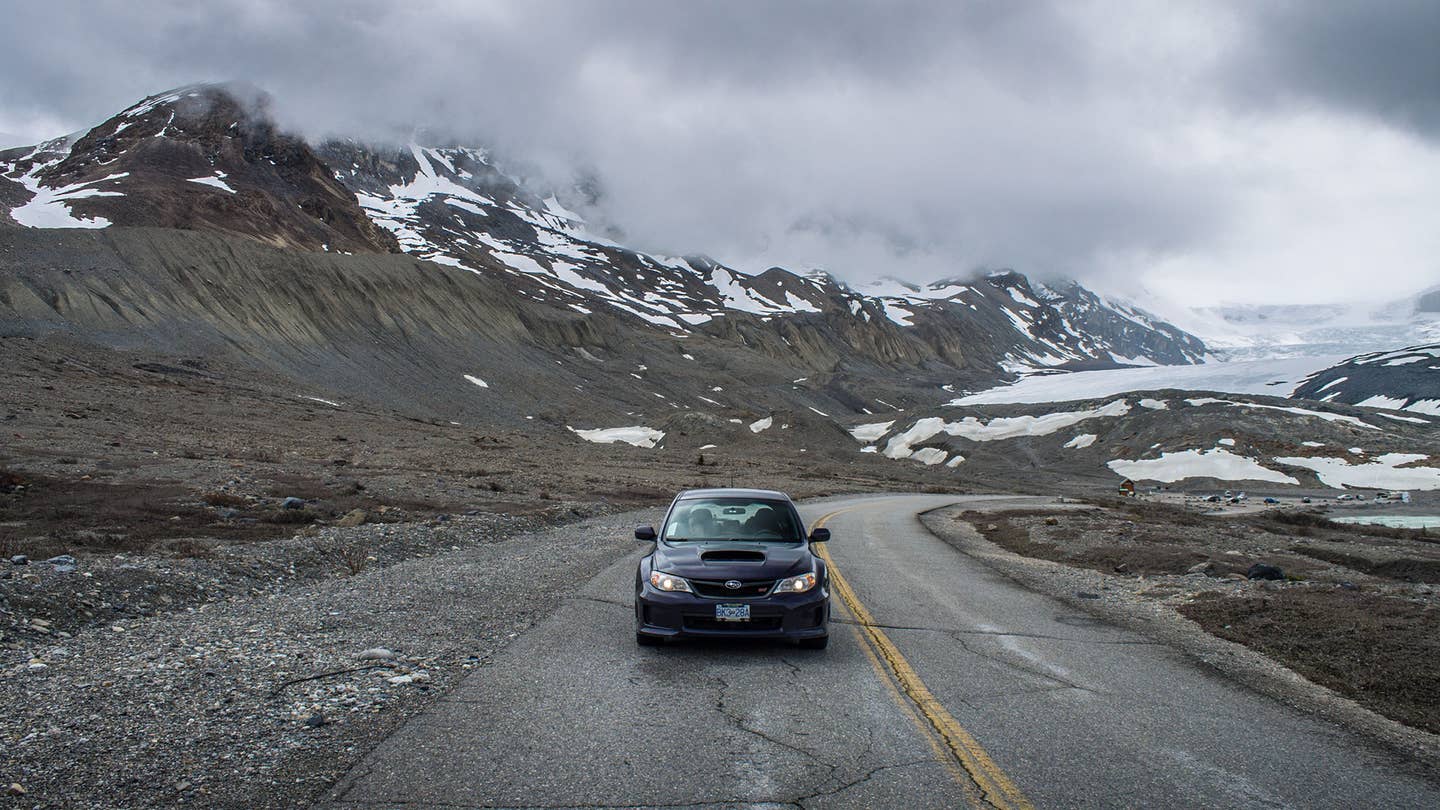 Halfway between here and there, the road dips from the desert to skim the verge of a lake. We hurtle along between water and rock as swallows explode from nests above us. Each bird has daubed a house of clay into the side of the cliff; below, our home is made of steel and moving fast.

A glint of metal ahead reveals itself to be a cruising convoy, with a lowered S2000 acting as caboose. It's a varied line, Dodge Challenger to Mitsubishi Evolution, and rolling slow with windows down and elbows on the sill. Sixth to fourth and roll into the boost for the long straight; we get a wave or two as we scoot past, and then there's nothing ahead but the road.

We've been on the road for weeks, and there are plains and mountains still to cross, a thousand miles and more to go. Two little girls sleep in the back seat with dirty bare feet and golden hair. Common sense would dictate this a journey made by the now-ubiquitous three-row crossover. But lookit – nobody needs a crossover.

Instead, we have the family car, a cheerio-strewn GR-chassis Subaru STI. Its hatchback is Tetris-packed with our pared-down needs, its front bumper is an entomological apocalypse. It is ugly, and dirty, and the spokes of its wheels are filled with the dust of gravel roads. It's wonderful.

Cars, especially the modern variety, aren't born with souls. Craftsmanship and character can be found in rare cases, but this Subaru wasn't lovingly assembled in a shed by a Nigel or a Luigi. It was stitched together by the robots of Fuji Heavy Industries, and has all the personality of Mr. Sparkle. Yes, it is disrespectful to dirt, but it is a mass-produced fishbulb of a thing.

But it's growing a soul. With every day, a new memory is formed and folded into the sheetmetal. We began today in a fog coming off the marshlands, stopped to marvel at the concrete behemoth of the Grand Coulee Dam, and bookended the evening with s'mores around a campfire in front of a homesteader tent, off the grid in Idaho. Family life with turbochargers – you can almost see Dom Toretto nodding his approval.

My girls are one and three, challenging and curious and funny. Every day brings new work to be done, and not every night is restful. In the Rockies we'll marvel at a hundred foot waterfall, then skid to a halt on a gravel pullout for an emergency nature pee. It'd be a lot easier to do this in a sluggardly rental RV and plot the straight routes.

But it would be so much less fun. In the evenings, we chart the long course by how serpentine the roads are. Add an hour wherever possible, then wind the clock back with the STI's steady gallop. We share the wheel and the map. Given the choice between hermetically sealed highway or windows down with the kids laughing and a contrail of dust on some little-used farm road, we take John Muir's advice: “Oh all the paths you take in life, make sure a few of them are dirt.”

Automotive enthusiasm takes many forms, from the desert cruising convoy to the track rat to the pre-war section at Pebble Beach. But there's no better way to find love in a car than to live out of it for a little while, exploring and learning and sharing the experience. The tool becomes a talisman. Washing the car on a Saturday morning, you run your hand over a chip in the hood and remember the rock that did it, flung by a semi-trailer on the way down to the Alberta badlands.

“You become. It takes a long time. That’s why it doesn’t happen often to people who break easily, or have sharp edges, or who have to be carefully kept. Generally, by the time you are Real, most of your hair has been loved off, and your eyes drop out and you get loose in your joints and very shabby. But these things don’t matter at all, because once you are Real you can’t be ugly, except to people who don’t understand.” -The Velveteen Rabbit

We slow for big horn sheep on the Icefields Parkway. We go to rally school at Dirtfish in Snoqualmie. My wife startles a bear while setting a morning campfire near Golden. My youngest manages to sneakily eat three entire dandelions. My eldest flies a kite off the top of a mountain. Wherever we go, the Subaru takes us there.

On the second to last day, we're running West again down towards Osoyoos lake in the Okanagan. I used to come here every summer as a child; I can see myself passing the other way, sliding around on the vinyl seats of an old Plymouth. And then, not so long afterwards, in a red Mazda coupe with my wife-to-be. She's eating black cherries and flinging the pits out the open window, the fruit staining her mouth and the wind whipping her hair.

A familiar road at last, climbing up to cross the Cascades. The kids are asleep again, my wife unfolds a map to check the distance. The gas gauge sits at a little over a quarter tank – good enough to leapfrog our planned stop. We are neither here nor there, a hurry-through, and miles still from our house. I stare back at my passing younger selves. Am I where they'd thought I'd be? Maybe, maybe not: but I'm home.