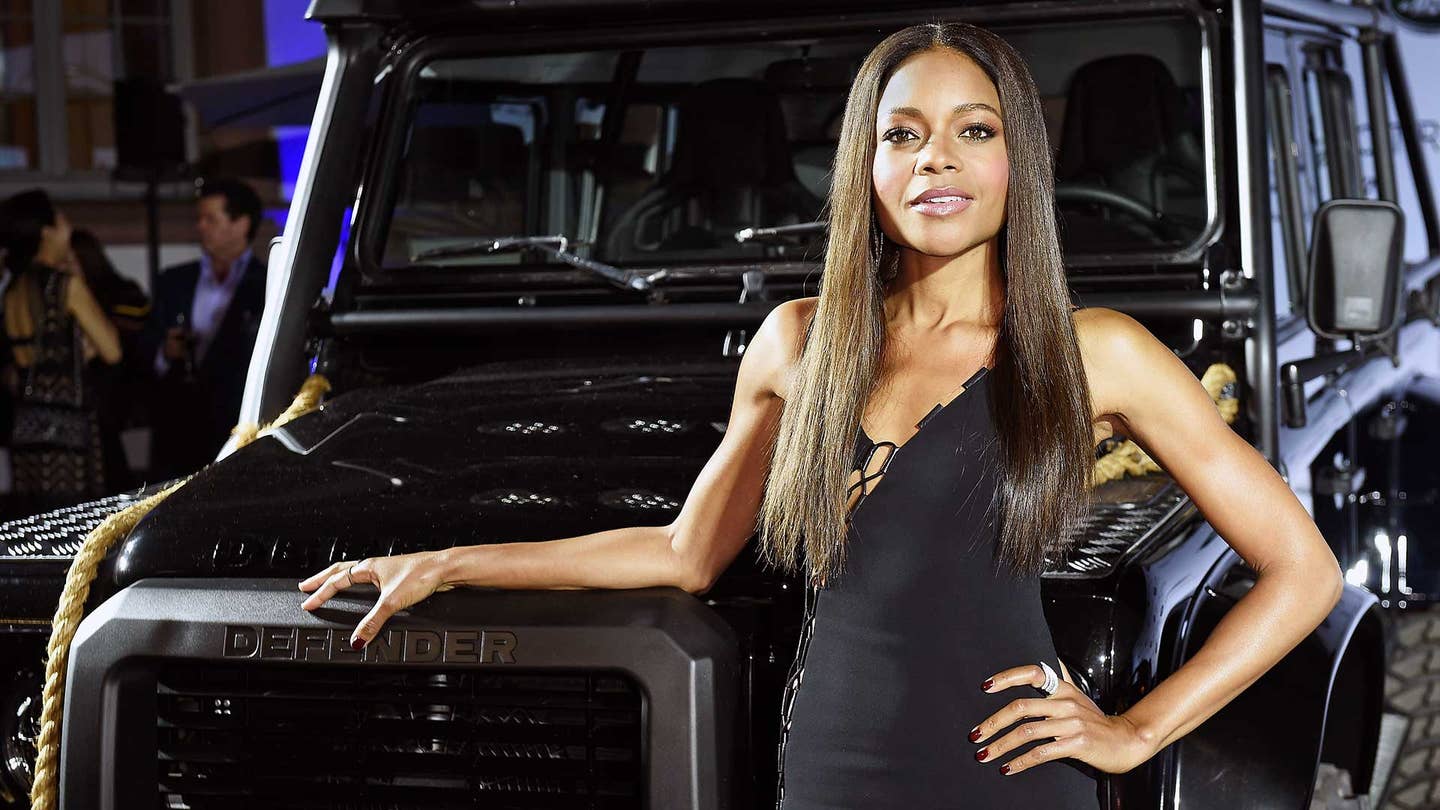 You might say Naomie Harris has a broad range, portraying everyone from Winnie Mandela in Mandela: Long Walk to Freedom to a dreadlocked priestess in the Pirates of the Caribbean franchise. But for lovers of car chases, credulity-testing automotive stunts and wicked gadgetry, the British actress is best known for taking over the role of Moneypenny in the 2012 James Bond movie Skyfall. In that film she was often seen behind the wheel of a Land Rover Defender, rescuing Bond (or mistakenly firing a slug into his shoulder), as per the usual.

Harris reprises her role in the eagerly anticipated 24th film in the Bond franchise, Spectre, which heads into global release later this fall. And she apparently carries on her connection with the British builder of upright, sporty SUVs. We bumped into her at the red carpet unveiling of Jaguar Land Rover’s Spectre special vehicles during the Frankfurt Motor Show, and asked her a few questions about learning to be a spy, being passed over for a promotion and how to make a daring escape—in real life.

The Drive: As Moneypenny, you’re sort of the right hand to the world’s most famous fictional spy. How do you prepare for a role like that?

Naomie Harris: You prepare usually with a lot of stunt work, and a lot of gun work. And you get a great director like Sam Mendes who helps you prepare by setting up meetings with people from Mi6, which is an extraordinary privilege, and not one that most actors get, to sit down with an actual spy. And that really helps.

We felt that you were a shoo-in for the role of M. Were you at all disappointed that it didn’t fall your way?

[Laughs] No, no. Not at all. I would never want to fill [previous M] Judi Dench’s shoes. And I think that Ralph Fiennes is the perfect person to do that.

In Skyfall, we got to see you do some interesting and intense driving in these Land Rover vehicles. Do we get to see some more of that in Spectre?

I can’t really say. But I do have a moment in the Discovery.

Like, a driving moment, or an aaahhh, a freakout moment?

I can’t really say. I have a moment. But you’re a good journalist.

Last question. What’s the most embarrassing thing that’s ever happened to you in a car?

In a car? What can happen that’s embarrassing in a car?

People fall asleep. They get into silly wrecks. They lose their car. They get arrested for doing something stupid.

Well, I haven’t had an embarrassing moment, but I guess I can say that I had a shocking moment. I woke up once in a car, and I was upside-down, because the driver had fallen asleep. So we were flipping off the side of the freeway.

Well, I lived to tell the tale. And so did he, thank goodness. The sunroof had actually been ripped off, because we flipped so many times. So we escaped through the sunroof.