Fiat and a Caddy? Like Felix and Oscar, these two guys... 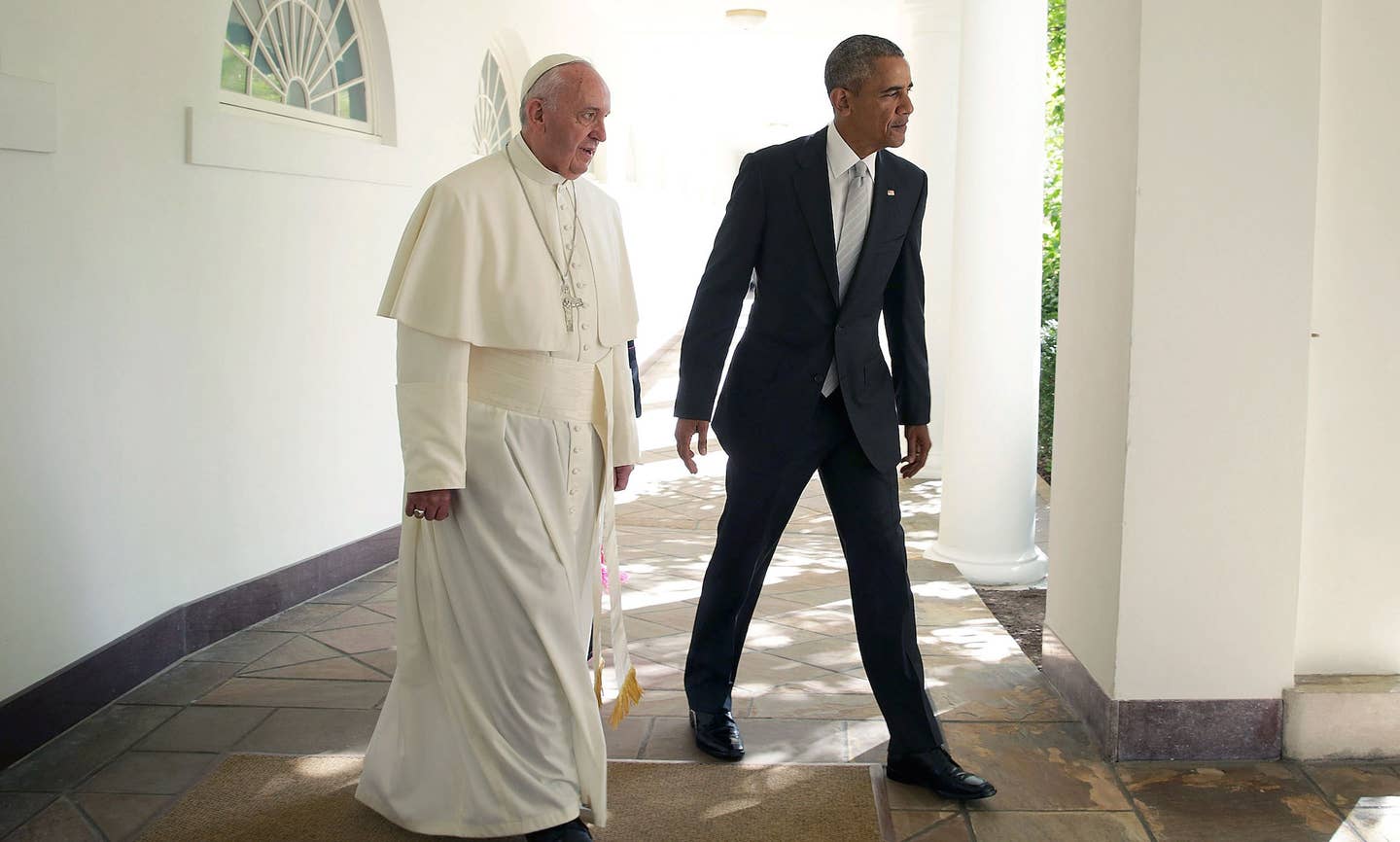 Pope Francis, beloved for his humility, empathy for the poor and progressive views on climate change, is currently visiting the United States. He’s in a Fiat 500L, a can of Italian tonno to which Fiat attaches fifteen-inch wheels and sells for $19,345. While other papal seats have opted for more leather and luxury—the longstanding Popemobile of choice was a Mercedes-Benz—Pope Francis has chosen to tour the country with the world's highest rate of gun ownership in a stylized, motorized bike helmet.

(We hear he actually requested a Vespa—Older, you know, maybe a little dented with a peace symbol on the bumper—but the Swiss Guard nixed the idea over concerns about flapping robes and exposure of the Papal Thigh.)

To greet the arriving Pope in Maryland, President Barack Obama showed up in The Beast, an eight-ton, million-dollar, heavily-armored Cadillac truck-limousine with its own oxygen supply. After greeting a line of dignitaries, the two world leaders paused to compare rides through a translator:

President Obama, straining to open the several-hundred-pound reinforced door, invited His Holiness to consider the rugged construction of his armored Cadillac.

Able to withstand a shot from a .44 Magnum, should folks get a little feisty, the President chuckled, beaming with nationalistic pride in all things large, armoured, truck-like and chrome-dipped.

Ill at ease around the materialistic Cadillac, the Pope allowed, Yes, it is astounding what a modest worker can create.

In exchange, Francis offered that his Fiat had trouble finding ninth gear.

The Fiat, which reads to most American eyes as a fleet-footed bread box, offers “exceptional fuel-economy,” said the Pope.

The Pontiff, still enamoured of his wee chariot of chastity, leaned conspiratorially towards the President and shared that, in the backseat of his car, was a bottle of spring water. Fresh, clean, and pure!

The tarmac summit nearing its end, Obama slung his frame down into The Beast, nodding vigorously.

Water—great! I ride next to several quarts of my own blood should I need emergency transfusion. Also, some Sun Chips. Nothing like the little amenities!

With that, the two men parted; the President’s corpulent, impervious limo heading one way, and the Pope’s motorized wash-bucket another, following a fleet of heavy-duty Chevy Suburbans like a wishful penguin after a pod of whales.