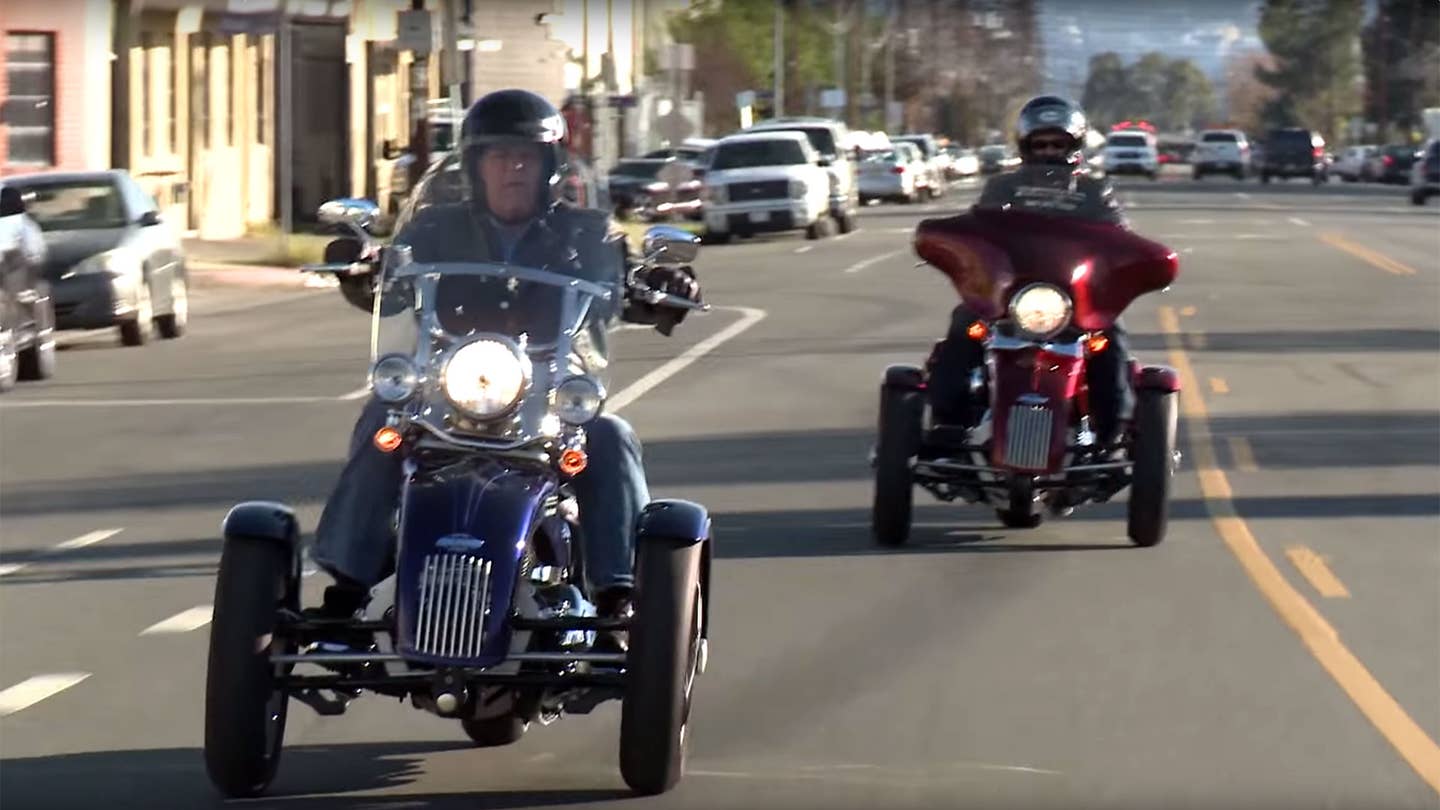 Dual front wheel motorcycles aren’t anything new, but as of late there’s been a solid uptick in leading bike producers adopting the design. Only one of the crop, though, began life as a prototype made from Legos, as did Tilting Motor Work's Harley-Davidson. The small outfit is helmed by Bob Mighell, a motorcycle nut who wanted to build a bike that cornered as well as his Porsche 911.

To go fast on a bike, you need to be able to brake hard and keep ample traction in a turn. The weakness, as Mighell saw it, was the single front wheel. Under heavy braking, 80 percent of the weight load transfers into the front end; an additional tire could help to support that shifting energy. A second wheel would also help prevent a washout on loose gravel or an oil slick. With that idea in mind, Mighell grabbed some of his sons’ Legos and whipped up a prototype with a front end modeled after the Morgan 3-wheeler’s sliding-pillar suspension. Lacking the skills to complete full-size fabrication, he brought the Lego model to a Seattle university with a vehicle design program, hoping to enlist the students and faculty to help realize his vision. They laughed him out of the room, calling it unstable. “That only fueled me more,” Mighell tells Leno.

Mighell procured a Honda 250 Rebel, sliced it apart and worked with some local machinists to get a functional example together. It performed so well, Mighell decided to up the power significantly. The next test mule was a Yamaha VMAX, with more than 1,000cc. That monster trike set a land speed record for three-wheelers in the Bonneville Salt Flats, reaching 134 mph and beating factory teams from the likes of Triumph.

Crucial to Mighell’s vision was maintaining the countersteering elements that make two-wheeled motoring glorious. “When you get into three wheels, you have odd steering characteristics,” Leno notes. “You’re fighting everything just because of the rotational mass, especially when you’ve got a sidecar or two wheels in the back. They end up being horrible, particularly in a turn.” With Mighell’s latest offerings, two variants of Harley-Davidsons, “if you were blindfolded, you’d think you were on a two-wheeler. It drives like a regular cycle,” Leno praises. Mighell adds that the only limiting element is the possibility of the floorboards dragging when you’re cranking it over.

The difference between the two Harleys is one includes tilt locking system that uses two computer controlled hydraulic cylinders to exchange fluid and monitor wheel speed. When it detects the trike is slowing down, it automatically rights itself. When parked, it’ll balance so well, the side stand is unnecessary. Mighell has three issued patents on his innovative tech, with three others pending. Since his setup is now technically a bolt on accessory - simply remove the front forks and slap his creation on - no frame modifications are needed, meaning they’re DOT compliant.

Originally designed for performance and safety, Mighell found several additional audiences in aging bike riders who are looking for greater ease in controlling a heavier chopper, as well as women who want a bigger bike. Kits are available for Harley’s Dyna line and Honda Gullwings with Brough Superiors coming online later this year. The first production run of 12 already sold out and the company is halfway through its second run of 25, all pre-sold. The cost, excluding the base bike price, is $10,000 for a non-locking front end, and $13,000 for the tilt lock, which Leno notes is equivalent to converting a bike to a rear-wheeled trike or adding a sidecar, though Mighell’s creation is lighter than both.

While cruising, Leno remarks several times that they handle precisely like a regular bike, handle bumps well, and couldn’t be simpler to drive. He also surmises there’s no ability to lane split, given the width, and it’s a bit of a funny sensation to have to mind foot placement, since too far forward means kicking a fender. Still, the machine draws a smile every time he’s able to lean it over.