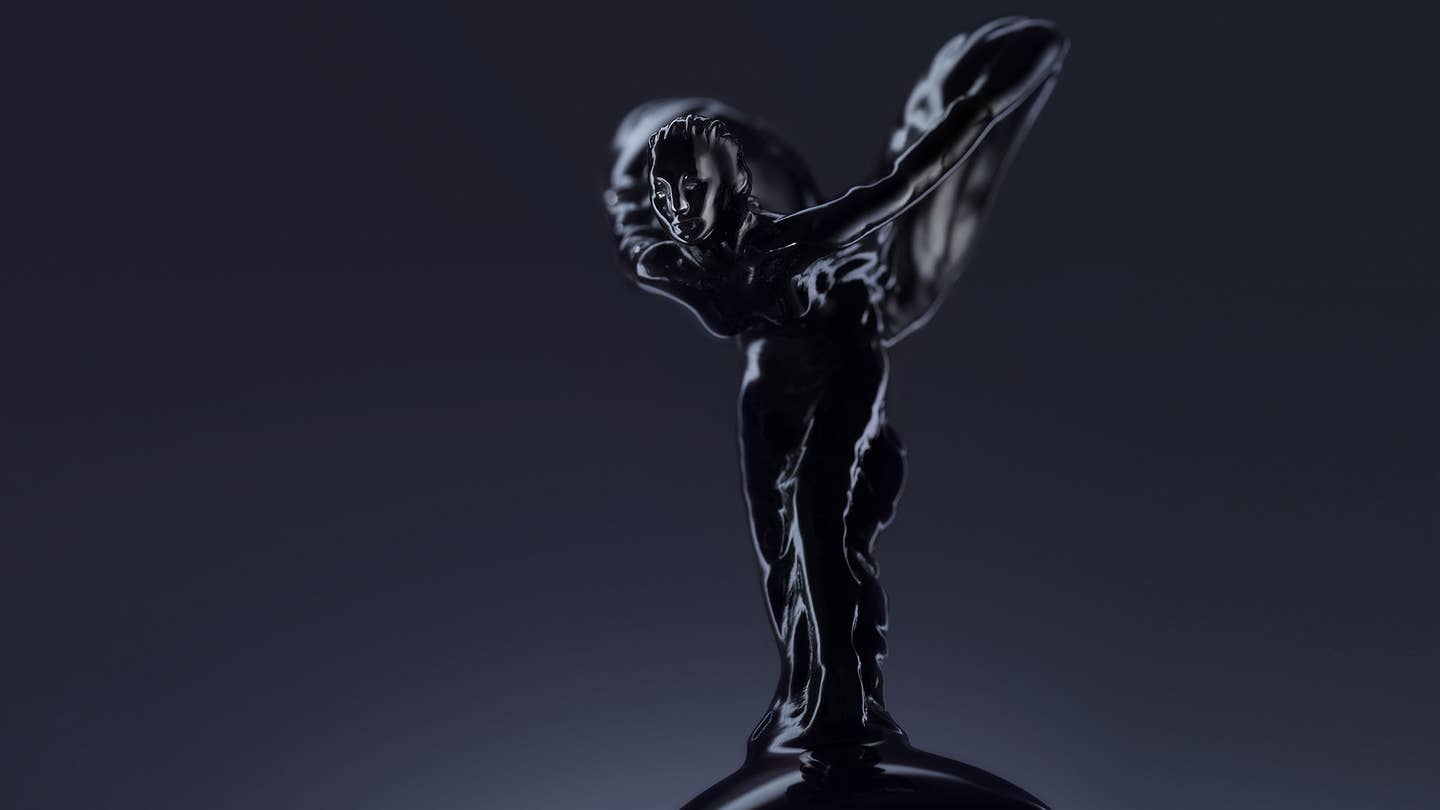 Buyers of ultra-luxury cars aren’t used to hearing the word “no,” unless it follows a question like, “Would you mind parking my helicopter poolside?”

Fortunately, Rolls-Royce, Bentley, and like purveyors are in the business of saying “yes.” Let the hoi polloi check off heated seats and a leather shift knob; the rich want what no one else has. Picnic sets, chillers for vintage Krug. Fitted luggage, embroidery and marquetry. Precious jewels and metals. Or, if you’re mattress mogul Michael Fux, a screw-you palette of lurid colors. His Rolls-Royce Wraith has an Easter-egg green exterior and matching cabin, and a crystal Spirit of Ecstasy hood ornament that may or may not be slashing her own wrists.

“We’re not the taste police when it comes to customer requests,” says Terrence Grogan, Rolls-Royce bespoke manager for North America. “The only person that matters is the one writing the check.” In defense of cars that seem sprayed by les Fauves, Grogan notes that colors that might push buttons and boundaries in Greenwich, Connecticut, can look right at home against the burning sands of the Middle East. Go figure.

The word “bespoke,” originally meant to describe a custom-tailored suiting, may be devalued of late, co-opted to describe everything from real estate to bicycles to bacon. But as practiced by European automotive brands, upgrading cars that often cost $200k, or multiples thereof, it’s both legit and lucrative. Rolls-Royce began taking orders on its new Dawn convertible nearly a year before the first deliveries in April, ensuring the Goodwood, England factory had plenty of lead time to personalize cars.

The typical North American Rolls-Royce customer now drops about 20 percent above the car’s sticker price on bespoke features, up from about 10 percent just two years ago. Go-crazy specimens like Fuchs' can double the car's base price. Popular extras include the crowd-pleasing Starlight Headliner, whose roughly 1,340 twinkling fiber optic strands mimic the nighttime sky. The headliner will set you back about $10,000 to $15,000, or more if you'd prefer, say, constellations that spun through heavens on the date and place of your birth.

Master of the Universe, indeed.

Much of the fabulousness is (relatively) straightforward. One customer, wanting nothing between his pedicured toes and Phantom's lambswool carpets, requested and received a gleaming shoe rack unit between rear seats. Storage for watches is a classy touch, as are cigar humidors; let Jeeves deodorize the cabin when he’s not busy chauffeuring. A mourning Texas couple recently had the image of their departed Corgi embroidered onto the seats of a Phantom. We can only imagine the dog’s funeral. Another pet lover had a custom dog bed installed in the Phantom's back seat, with a blanket matched from a color swatch. (If some Tramp even thinks about sharing spaghetti with that Lady, he'll end up like the Corgi). Choose a unique color, such as Rowan Atkinson’s Blackadder Blue, and Rolls assures owners they'll never see it repeated on another car.

Rolls-Royce spends up to one month creating a set of wood cabin veneers. One tree provides just enough, sliced thin by a rotating blade, to outfit one car. In most every car, wood is bookmatched to create a perfectly symmetrical mirror image, akin to opened pages of a book. But as in high-end yacht building, the grains, colors and patterns of multiple woods can also be arranged to form images. Craftsmen for the Rolls-Royce Metropolitan, part of an ongoing series of limited-edition bespoke models, hand assemble 500 strips of veneer to form breathtaking cityscapes, including the fronts and backs of rear-seat picnic tables. With that level of intricacy, some projects top the $1 million mark. They include last year’s masterly Phantom Serenity, whose hand-painted silk interior in a cherry blossom theme looks like a Japanese woodblock come to life.

Materials? You name it. Alligator, ostrich, mother of pearl and rubies are all fair game. One Rolls customer demanded diamonds encrusted into cabin veneers, a particularly arduous process as workers struggled to make sure every sparkly point protruded at the identical height.

"That one took three or four tries before they got it right," Grogan says.

To help meet demand, Bentley reorganized its Mulliner bespoke commissioning department two years ago, from an on-request, back-of-shop affair to an active unit. Its team looks to buttonhole customers at dealerships. This year, the firm made a multi-ton splash in Geneva with the Mulsanne Mulliner Grand Limousine. It’s a one-off (for now, at least) version of the flagship, stretched a meter in length and with facing seats for four rear passengers. Bentley hopes flexing its bespoke muscle will fire imaginations and, consequently, pry open wallets.

Customers can commission a car in-person at Bentley's facilities in Crewe, Chesire, where Mulliner employs a trio of designers who can help tailor a personal car to the last stitch of thread. The result might be something as simple as a family crest embroidered on a headrest, yet many customers “don’t know what they want until they see it,” explains Geoff Dowding, director of Mulliner. "But when they see what Bentley can do, they’ll say, ‘Well, I quite fancy that myself.'

"What if the sales guy said, 'How about we put your initials on the Flying B?'" he asks me. "Now, would you think to ask for that? Probably not. But it makes people feel a million dollars. It's absolutely for you and no one else."

And once a customer sees his name engraved on a Flying B hood ornament, available in four metals, including solid silver, what kind of skinflint is going to say no? The feature is one of 96 new ideas that Bentley will share with dealers in coming weeks. Dowding says that take-charge, money-to-burn types get a kick out of the process, like spec-ing a yacht or drawing up plans for a slopeside home in Aspen.

Asked to convert a Mulsanne to a hearse, Bentley politely declined. The brand also nixed a request for a tartan plaid convertible top. Another customer shot an alligator and hoped to use the hide, but there wasn’t enough skin to do the job.

Still, there are caveats. Bespoke cars must meet all crash, safety and environmental regulations. (Though one Bentley customer in Asia wanted a lamé-like seat material so badly, he covered the six-figure cost of crash testing the chairs.) Marques frown on massive re-engineering of electrical or other onboard systems. A Spirit of Ecstasy modeled after Jennifer Lawrence? Sorry, the Roller's classic ornament is off-limits, as is the basic grille design. Bulletproofing and other security features are beyond the brands' purview. Gun storage can be acceptable, Bentley says, but must be appropriately swanky, safe and legal.

Asked to convert a Mulsanne into a hearse, Bentley politely declined. The brand nixed a request for a tartan plaid convertible top, which would've required "miles of material" produced from scratch. Another customer shot an alligator and hoped to use the hide, but there wasn’t enough skin to do the job. Bentley has managed to source timber from a customer’s own land, though any wood must pass strict durability tests. Because a Bentley that pops up at Pebble Beach in 2050 can’t embarrass the owner or brand with wood that’s worn or faded.

Despite the revolution of computer-aided design, one bespoke feature has largely eluded today's kingly brands: The one-off coachbuilt body. That ultimate statement of exclusivity would echo classic marques—Bugatti, Delahaye, Duesenberg—which often let buyers choose between a factory body or one from an independent builder. Rolls says it wouldn't necessarily reject a request for a coachbuilt model. (Make them an offer). The brand did decline a request to build a Phantom exterior entirely from exposed carbon fiber, because of the exorbitant cost involved in crash testing for a single customer. “You wouldn’t have much change from $5 million on that,” says Gerry Spahn, Rolls' North American communications director.

Now, with Bentley's Bentayga en route to owners, and with Rolls plotting its own SUV, the companies will have spacious new canvases to fill with over-the-top artistry. Teak-lined child seats, V12 powered Jet Skis, $30,000 barbecue sets. Maybe a gold-plated trailer hitch, like Trunk Nutz, only classier. The possibilities are as endless as the supply of billionaires.