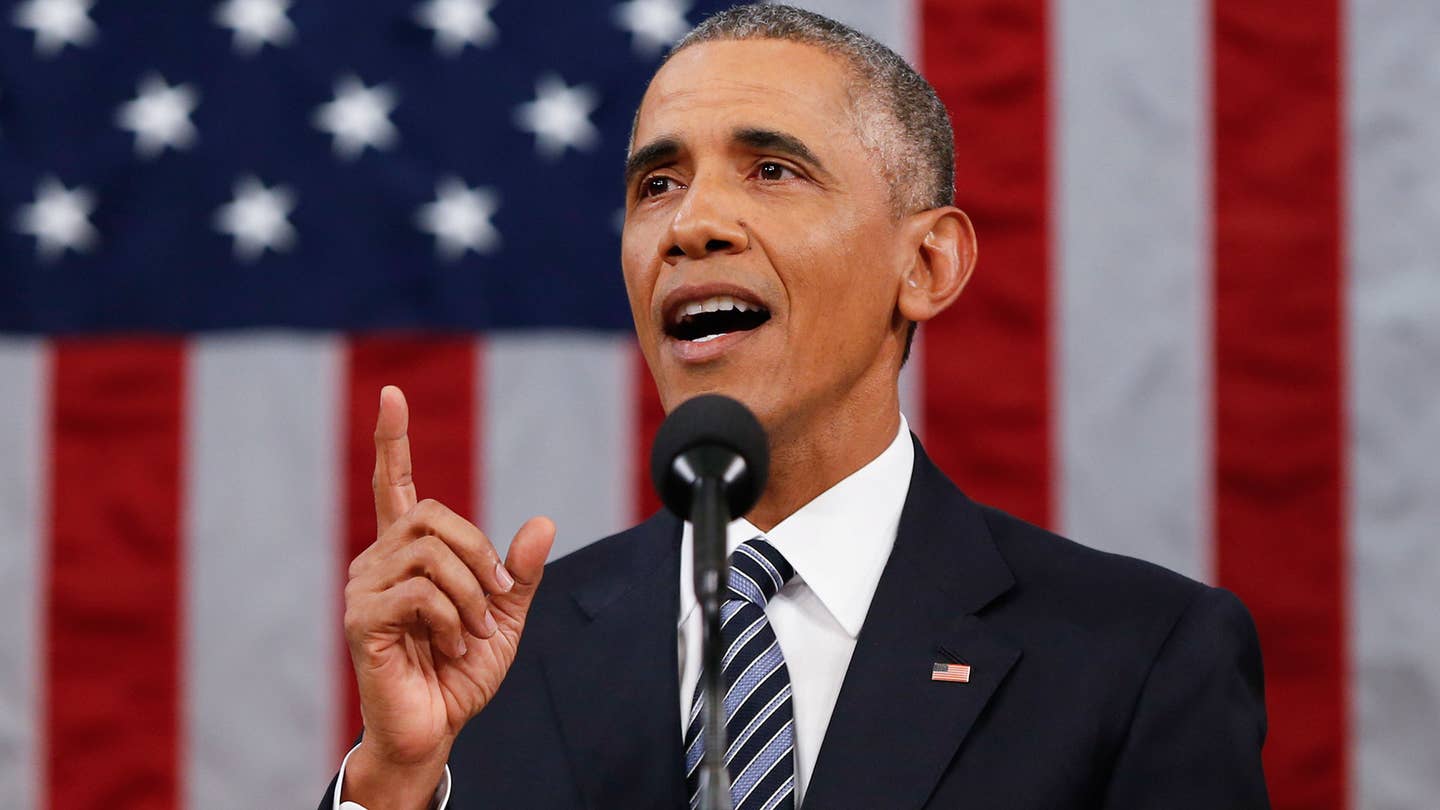 President Obama’s best laugh line in his final State of the Union address was the one that humanized him, that put him firmly on our street, even for a guy who rides in a bulletproof, $1.5-million Cadillac limo: “Gas under two bucks a gallon ain’t bad, either.”

Obama had already tossed in a reference to Detroit’s best-ever-year in 2015, to wrap up a back-patting summation that’s de rigueur in any State of the Union speech: the United States as the strongest, most durable economy in the world. Riding a streak of 14 million new private-sector jobs, the best two years of job growth since the Nineties. An unemployment rate cut in half.

“Anyone claiming that America’s economy is in decline is peddling fiction,” Obama said, in the striking yet plainspoken cadence that helped make him a two-term president.

But then the President acknowledged that all’s not well in our economic world, a rare instance where flaming liberals and boiling Tea Partiers might be in perfect agreement. And his words would certainly strike home with autoworkers, America’s original middle class, or the white-collar auto executives who likely don’t feel much more secure in these days of consolidation, globalization and brutal outsourcing and downsizing.

Americans feel anxious, Obama said, over economic changes that began long before the Great Recession, and haven’t let up:

“Today, technology doesn’t just replace jobs on the assembly line, but any job where work can be automated,” he said. “Companies in a global economy can locate anywhere, and face tougher competition. As a result, workers have less leverage for a raise. Companies have less loyalty to their communities. And more and more wealth and income is concentrated at the very top.

That squeeze shows no sign of abating, not least in auto factories where a few thousand workers can crank out hundreds of thousands of vehicles, their unpaid robot helpers at their sides. So it’s worth asking: How does the auto industry continue as one of the great drivers of the American economy, one that still impacts roughly 11.5 percent of gross domestic product and directly employs 1.7 million people?

The answer lies in other parts of the State of the Union. The lofty stuff about moon shots, Thomas Edison and the innovation in America’s DNA. After a pointed rebuke to climate-change deniers, Obama said that even if the planet wasn’t at stake, “Why would we want to pass up the chance for American businesses to produce and sell the energy of the future?”

Or, he might have added, the cars and trucks that run on that energy, and in turn provide the engine to move people, goods and services around the country.

The fact that we’re enjoying $2-a-gallon gasoline, of course, has everything to do with a glut of traditional hydrocarbon fuels; as the fracking revolution (which Obama did not mention) has helped America cut foreign oil imports by 60 percent (which he did).

But though Detroit and its customers are enjoying another orgy of pickups and SUVs, the Big Three, for once, seems to be realizing that we’ll one day need the automotive version of safe sex. They can either get out front on converting Americans to alternative-fuel cars, or be left behind by the likes of Tesla or some other tech disruptor. But they need to invest in that transformation now, while they’re minting profits, and before another recession starves their R&D budgets. Cars like the all-electric 2017 Chevrolet Bolt, which promises a 200-mile driving range for around $30,000, are a good start, as is the 2016 plug-in hybrid Volt. Even Chrysler, that inveterate fuel-swiller, brought an out-of-nowhere surprise to the Detroit auto show, a plug-in-hybrid Pacifica minivan that goes on sale this fall.

Frankly, most Americans probably aren’t yet ready to take the leap, thanks to the same $2-a-gallon that brought knowing chuckles from Obama’s audience. But that’s what real automotive vision and innovation are about, creating cars that people didn’t know they wanted or needed, until they did.

The President’s speech had that wistful air, full of hope over change that he knows he won’t be around to help bring about. He urged America to accelerate the transition from dirty energy to clean. He suggested that oil and coal should be taxed and priced to reflect its true impact on taxpayers and the planet.

“Now, none of this is going to happen overnight, and yes, there are plenty of entrenched interests who want to protect the status quo,” he said. “But the jobs we’ll create, the planet we’ll preserve, that is the kind of future our kids and our grandkids deserve. And it’s within our grasp.”

Let’s hope that Detroit had the volume turned way, way up.