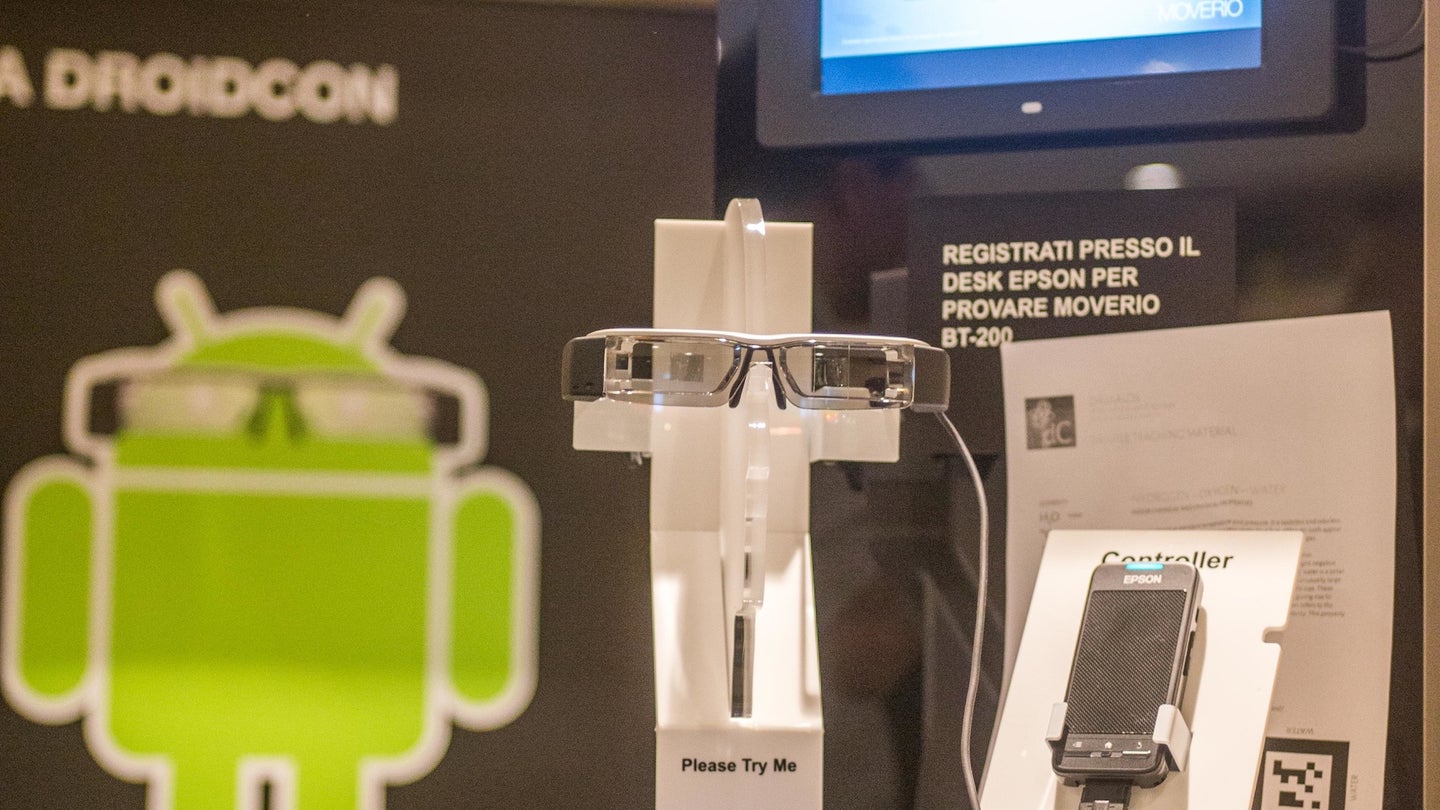 Remember Google Glass? The tech giant’s efforts at forcing augmented reality technology into the market were short-lived and under-delivered. Most recently, we’re seeing Apple join the fray with its new iPhone X pushing the mainstream demand for AR. While Apple’s point of attack largely consists of attracting gamers via AR, Epson and DJI have partnered to try it from a different angle: Drones. Meet the Moverio AR glasses.

According to DroneLife, DJI and Epson, the latter most famous for its printers, announced that their Moverio glasses will combine the supposed demand of AR with the increasing appeal of unmanned aerial vehicles. In other words, they’ve developed a drone flight simulator app with which consumers can fly virtual drones without the safety hazards of handing a newcomer the real, physical alternative. Developed by Y Media Labs, the app was exclusively created for Epson’s Moverio (FPV/Drone Edition) smart glasses.

According to DroneLife's report, DJI is allowing for many of its currently-available flight controllers to be compatible with this app. That means the only requirement of users who have a controller for a Mavic Pro, Phantom 4, Inspire 2 or a Spark is to buy Epson’s glasses and download the software. But before we dive any deeper, let’s take a look at Epson’s own promotional video for the Moverio glasses, shall we?

“Augmented reality is set to revolutionize the industry with the ability to create a safer, more productive flight. The hands-free, heads-up experience delivered by the Epson Moverio BT-300 is the ideal way to experience aerial AR,” said Romsin Oushana of DJI Partnerships. Naturally, any spokesperson for a tech company pushing its new product is going to sound this enthusiastic, with claims of it being a game-changer and other bold statements. However, this partnership between Epson and DJI really does seem to have resulted in a fairly exciting product.

According to DroneLife, the flight simulator app is comprised of a fly mode and two mini-games for more advanced pilots. It’ll be released on the Moverio Apps Market before year’s end, but is already available to test at any DJI store and most drone retailers.

“This is arguably the first mainstream consumer application for augmented reality smart glasses,” said Eric Mizufuka, manager of New Ventures, Epson America. “The ability to digitally ‘paint the sky’ is a game-changer in the drone market and will usher in an exciting range of applications. We’ve been very impressed with DJI’s updated Mobile SDK and look forward to continuing to invest in new applications and partnerships in this space.”

See What Your Drone Sees With the DJI Goggles
The Drive

Clearly, the two companies involved here seem to have found what each of them needed in the other. While Epson’s tech-expertise in developing the glasses is something DJI likely has a bit less experience in, the drone-manufacturer has the drone physics, hardware (the controllers) and UAV info that Epson doesn't.

We’re excited to get our hands on the Moverio later this year. Augmented reality is definitely an interesting parallel to virtual reality, and could result in opportunities that are highly useful and simultaneously currently unclear. However, as with most sophisticated new consumer technology, the entry-cost is always pretty high. According to DroneLife, the Moverio glasses will cost $699. At that price, it better be the game-changer these companies claim it is.