Focus RS drivers are getting the 'Ken Block' treatment for their hot hatches. 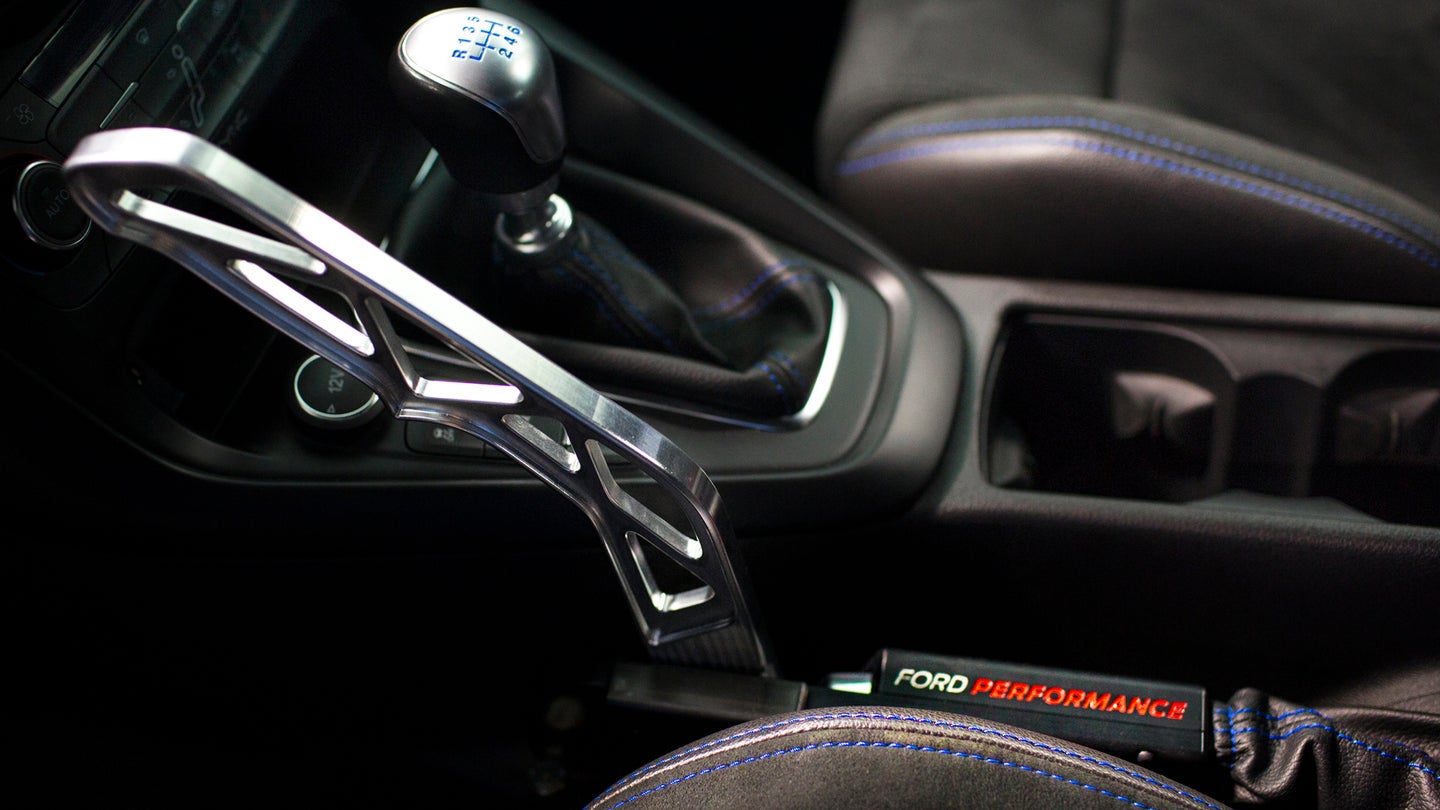 Spread your wings, Focus owners, as the world of Ford Performance is adding another fun little surprise to the Focus RS that makes the world a little more interesting. At SEMA, the automaker touted its brand new, never before seen, electronic handbrake for its flagship Focus RS. Meet the Drift Stick.

If you've ever used a hydraulic handbrake before, you know that each car has a unique feeling that depends on how big the unit's hydraulic master cylinder and brake lines are, as well as the length of the handle, and the position of the unit relative to the driver. With the Drift Stick, internally code named as Project Wicked Stick, all of these variables are removed for the unit to become consistent across all platforms.

The premise for the Drift Stick is simple. The unit slips over the existing handbrake lever and when pulled, rather than using the brake itself, an electronic switch is activated to actuate the temporary locking of the rear emergency brake while opening up the clutches in the differential, preventing power from being given to the rear wheels until the lever is released. Combined with the Focus RS' torque vectoring, specifically when using the profile that the drift mode button activates, the car will leave some impressive skids in its wake —just don't wreck your car, because you might end up on The Drive.

“I think it’s really cool that Ford Performance is offering customers a way to create large-angle drifts in the Focus RS," said Ken Block, who consulted on the design of the Drift Stick, "Obviously it’s something that I’m really passionate about having been a part of the development of the production vehicle, so it’s exciting to see it come to life."

Installation is a breeze, and frankly, I'm kind of jealous. If you were to install a hydraulic handbrake on any car, the Focus RS included, it would involve either installing a secondary caliper on the rear wheel hub, or tapping into an existing brake line for a pass-through setup. This is obviously costly for someone who doesn't work on their own cars, and Ford wants to enable Focus RS drivers to easily have fun without permanently altering their vehicles.

There's no cutting and flaring of brake lines, no welding the handbrake to the chassis, no extra calipers to mount up, and you don't even need to bleed the air out of the brake lines when you're finished installing. Simply slip it over the existing handle, secure the unit, and pull to activate some sweet drifts. Ford also notes that the handbrake connects to the car's Controller Area Network (CAN bus) to act as a "professional calibration tool," but what that actually means isn't really clear. We'll just call it a "sideways apparatus" instead.

The Drift Stick can be yours on December 1 for only $999 dollars and comes complete with the approval of Hoonigan star and professional rally driver, Ken Block. It's the perfect Christmas gift for any RS owner and comes directly from the manufacturer. Best of all, owners won't void their warranties for installing the Drift Stick (though I'm not certain that it's advisable to thrash around your RS and bring it to the dealer). Just don't tell grandpa about it.