The heart says no but the brain—and some of racing's biggest brand names—say yes. 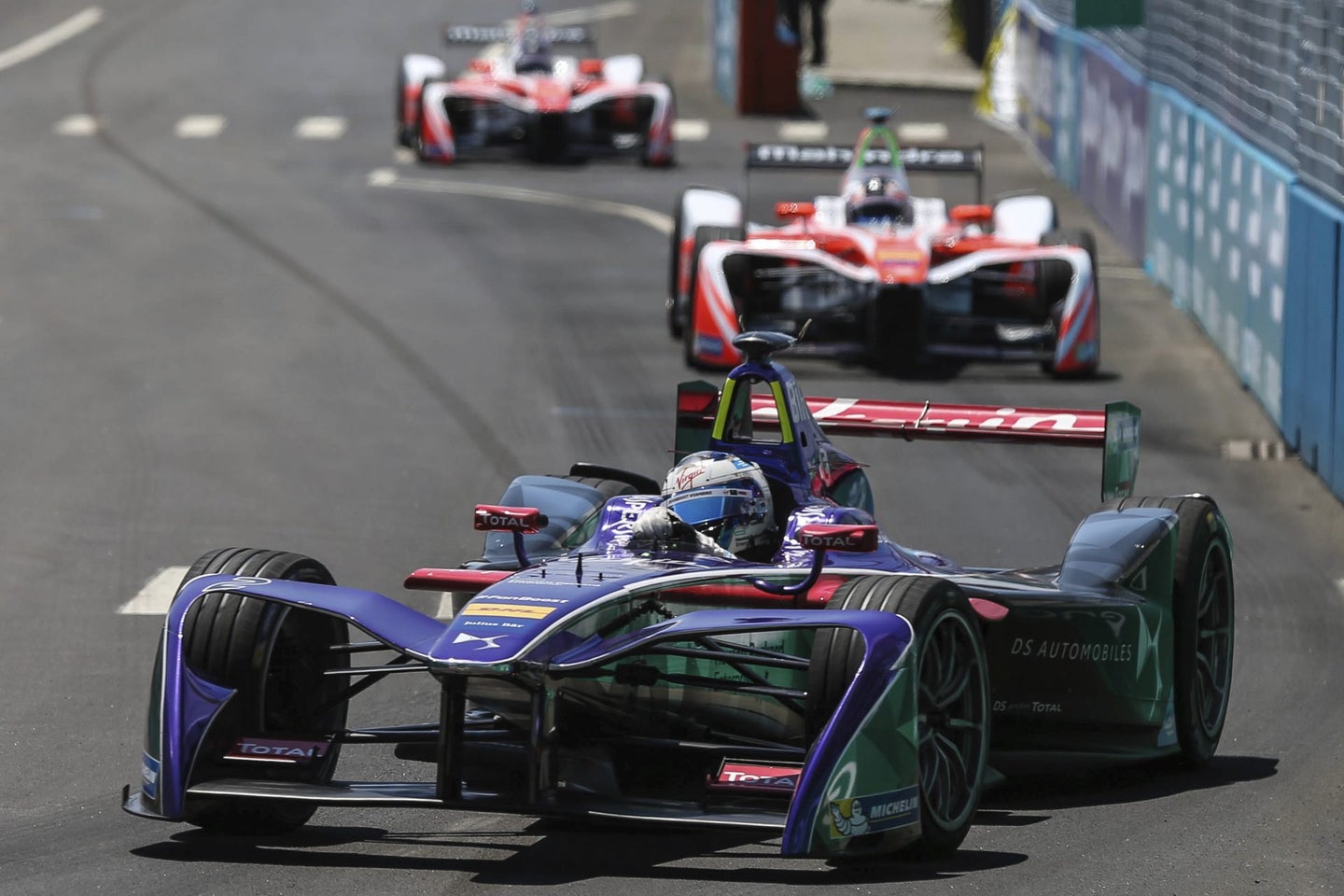 Porsche is officially leaving the Le Mans Prototype Class behind in favor of joining Jaguar, Audi, BMW, and Mercedes-Benz in Formula E, and around this office, most of the immediate reactions were along the lines of, "Great, Le Mans is dead," rather than, "Wait, is it now time to take Formula E seriously?" Which seems odd when you consider that the FIA-sanctioned EV series now includes some of the most storied names in motorsport history, and normal when you consider the prickly, hidebound animal that is the racing enthusiast.

Car enthusiasts, and by extension car-racing enthusiasts—or reverse that flow if it makes more sense to you—often claim to like weird things, but in my experience that's only partially true. When it comes to oddity, what enthusiasts like, broadly speaking, are things that are both weird and old, and furthermore appreciated by at least some subset of other enthusiasts: a familiar type of weirdness. History, by way of prior enthusiasts, must have vetted certain curiosities—the awkward-fish styling of a Citroën DS or a six-wheel Tyrrell P34 Formula 1 car—for those things to be considered Weird But Still Fun, or perhaps Fun Owing to Weirdness.

New weird things—the Porsche Panamera when it debuted, the BMW i8, the proposed F1 halo guard—are on the other hand routinely derided. They are not simply ugly, or pretentious, or somehow cowardly, but also Wrong in the Context of History. When it comes to enthusiasm—most any type of enthusiasm—rule number one is: Even if It's Good Now, it Was Better Back Then.

Such is the problem faced by Formula E, a new weird thing. Because no one spent their childhood Saturdays handing beers to his dad as the guy wrenched on a battery, and because Fangio, Hunt, McRae, and Earnhardt only ever put foot to gas and never foot to electron, Formula E for a certain type of enthusiast will perpetually fall under the definition of "experiment"—linked not to history but to science, and therefore unworthy of enthusiasm; insubstantial.

The main complaints about Formula E seem to be that the cars aren't loud enough and that the racing isn't fast enough. The first is a fair point, especially at the start of a race, though even the most charismatic of deafening noises loses its appeal at the two-hour mark, even if it is coming out of a Corvette; the second begs the question: compared to what? Outright speed does not automatically produce great racing. Formula One, the series Formula E most resembles at a glance, isn't particularly fast compared to IndyCar, but has motorsport's largest fanbase by far. Or, if you simply need proof of a high fun-to-speed ratio, go watch Sprint cars or Midgets or certain vintage series.

And on paper, Formula E has many of the qualities fans now complain have disappeared from other series—weirdness included. (Think about the fact that drivers have to swap out of perfectly good cars at some midway point during the race, and also how fun that is to watch: between the footie-pajama racing suit and the helmet's wobbly, big-headed effect, drivers look like hyperactive toddlers jumping from one race-car bed and being speedily tucked into another. It's hilarious.) Series rules are opening up rather than constricting; the cars are pretty; racing teams are pushing relevant automotive technology forward in tangible ways—next year, the batteries will reportedly be able to endure an entire race—and the series now boasts some of the most storied marques in motorsport history.

Even better, it's unpredictable. I once covered a European NASCAR race at Le Mans and discovered a scene that I described at the time as "bumper cars crossed with an orgy": The effect of young drivers still mostly unfamiliar with big, heavy stock cars, during an all-out sprint, and on a winding European road course no less, was barely-controlled mayhem recognizable as racing because it (mostly) moved in the same general direction. I watched the whole contest wearing a dumb, happy grin, consumed with curiosity as to what sort of madness was about to unfold. The New York Formula E race a couple weeks back felt similar—there were mysterious vehicle failures, drivers massively misjudging speeds and careening off the track, heroic and aggressively stupid passes—and it's not hard to see why: teams qualify on the same day they race, new tracks are being added all the time, and the series itself is only a few years old so everything is new to everyone. Drivers and teams are figuring out things on the fly while all the while pushing, pushing, pushing, pushing.

And now, the remarkable lineup of manufacturers, most of which left established series (Mercedes-Benz from DTM, Audi and Porsche from LMP1) in favor of Formula E for the same reason those companies are dedicating so many resources to developing battery-powered cars despite the fact that EVs make up a microscopic portion of global sales: the people in charge of those companies believe the future will be electric. And, most likely, the expense of traditional racing is outstripping its modern popularity.

(In a way, the perceived radicalness of Porsche's move to Formula E underlines how little the automobile has changed since its invention. All motorsport is basically a management of energy and failure in the attempt to get somewhere faster than everyone else, and Formula E is no different. But unlike Formula E, engines across the rest of the motorsports kingdom are essentially similar; a dragster's Hemi Elephant engine is recognizably the same technology as an F1 car's turbo V6 or a small-block V8—whereas a battery belongs to a different taxonomic class altogether. A manufacturer could therefore throw money at whatever series made the most business sense without needing to fundamentally change its skill set because the drill was basically the same: build an engine that runs on a petroleum distillate, put it in a vehicle, and make those things work together reliably enough to both go fast and keep running long enough to finish the contest. But EV racing represents a different skill set altogether. With due respect to the infinite complexities of and differences between NASCAR, WRC, F1, DTM, Stadium Super Trucks, Top Fuel, and IndyCar, those series are far more similar to one another in terms of basic technology than any one of them is to Formula E.)

The electric future is cheaper, too, at least in terms of FIA racing: a season in F1 or an LMP1 campaign in WEC can costs tens of millions of dollars at the low end and several hundred million to win, but Formula E capped investment per season at $3.3 million when it launched. Amid increasing diesel-emissions scandals and the various associated penalties and fines—including, in VW's case, a requirement to spend billions of dollars specifically on EV infrastructure—it's no wonder race-pedigreed European brands have decided to invest a small amount to position themselves down the road and hope, as vehicles become increasingly electrified, the fans show up at some point—rather than blow a metric fuckton of money now with dubious returns. Or, to put that point in the form of a question: Did you ever buy an Audi because of the brand's Le Mans prototype-class dominance?

I'm not a Formula E apologist or booster or fanboy—or even a fan, really. The New York race was the first I saw and I have no plans to start following now. The racing is missing some elemental ingredient I can't put my finger on; in any case it is too slow, the races too short, the stakes too low. I'm only pointing out that while many see the EV series as an anomaly at best or what's wrong with motorsport at worst, it in fact does many things considered "right" about racing—and not only right, but otherwise vanishing. Formula E is unpredictable and relevant and weird—and, yes, new—and it's worth seeing where Mercedes-Benz and Jaguar and Audi and BMW and, now, Porsche take it.

In other words, Formula E is worth taking a chance on, if only because a significant number of history's best racing marques already have.