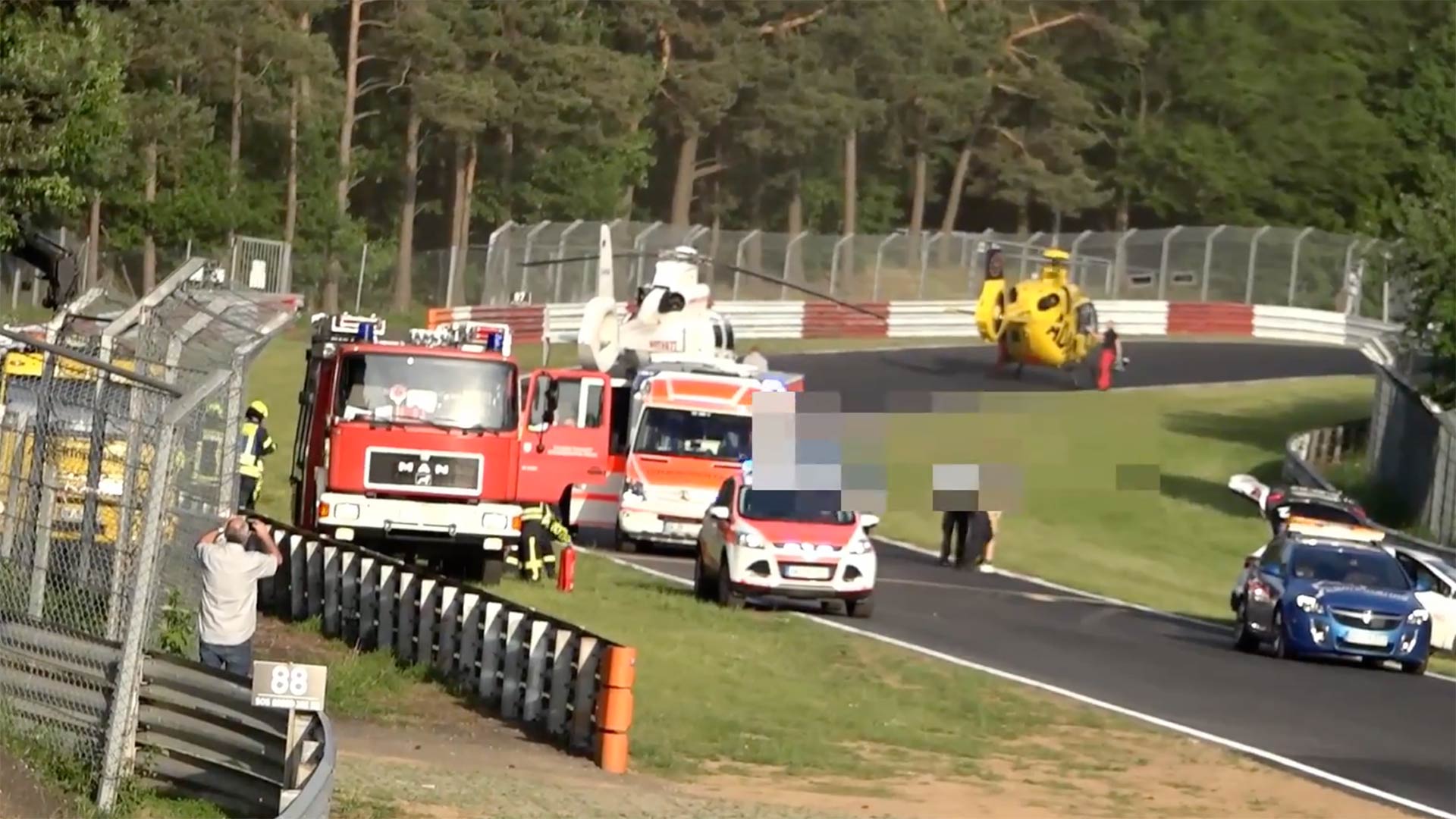 When speeding around the Nurburgring, you are taking calculated risks every second. However, sometimes your calculations are off, or the unavoidable happens. Depending on the severity of a crash, the Nurburgring emergency services—track safety, fire, and EMS personnel tasked with the responsibility to quickly respond to your call for help with professionalism and precision—may jump into action. Handling thousands of emergencies each year, the Nurburgring emergency services is a well-oiled machine.

Regardless of how much experience and medical knowledge the paramedics on scene have, the Nurburgring is approximately two hours away from the nearest large-scale trauma center in Ludwigshafen, Germany. With this in mind, it is critical that the incident commander determines whether or not to call for a medevac. If "significant mechanism of injury" has occurred and the patient's condition is deemed critical, it would be highly advisable to start out "the bird" for a rapid transport to the nearest trauma center. Although the patient could go St. Josef's Hospital in Adenau, they would quickly require a transfer to a trauma center—thus it would be beneficial to go directly to the trauma center if the patient's condition is stable enough.

In the video below, you can see several firetrucks and ambulances as well as a tow crew. The tow crew carefully removes a heavily damaged BMW 330i Sports Wagon (or something similar) from the other side of the Armco and fencing. Based off the damage to the vehicle and its final resting place, it seems likely there was a significant mechanism of injury—the vehicle went airborne, spidering of windshield, compartment intrusion, etc.

The interesting part of the video, however, is that the ambulances and medevacs are still on scene when the tow crew removes the vehicle. Unless they are the quickest-responding tow crew in the world and can successfully remove a vehicle from the woods in 5–10 minutes, the timing seems a little off. With modern emergency medical services, a lot of diagnostic and rapid interventions can be done in the back of an ambulance or in a helicopter—but there is also a "load-and-go" mentality when you are dealing with a true trauma victim.

One possible explanation for this is the helicopters were called as a precautionary measure, but I find that a little hard to believe since two medical helicopters were on scene already, and a "Polezei" helicopter arrives on scene towards the end. (When a police helicopter arrives on scene, that is never a good sign for the patient's condition.) Another possibility is that the patient or patient's needed to be intubated or another advanced emergency medical procedure needed to be done before the helicopter or ambulance went in motion. Finally, the third possibility is...well, let's not go there.

If anyone has more knowledge on the standard operating procedures for the Nurburgring emergency medical personnel or have any insight into this incident, please leave a comment below.  We'd love to know more.