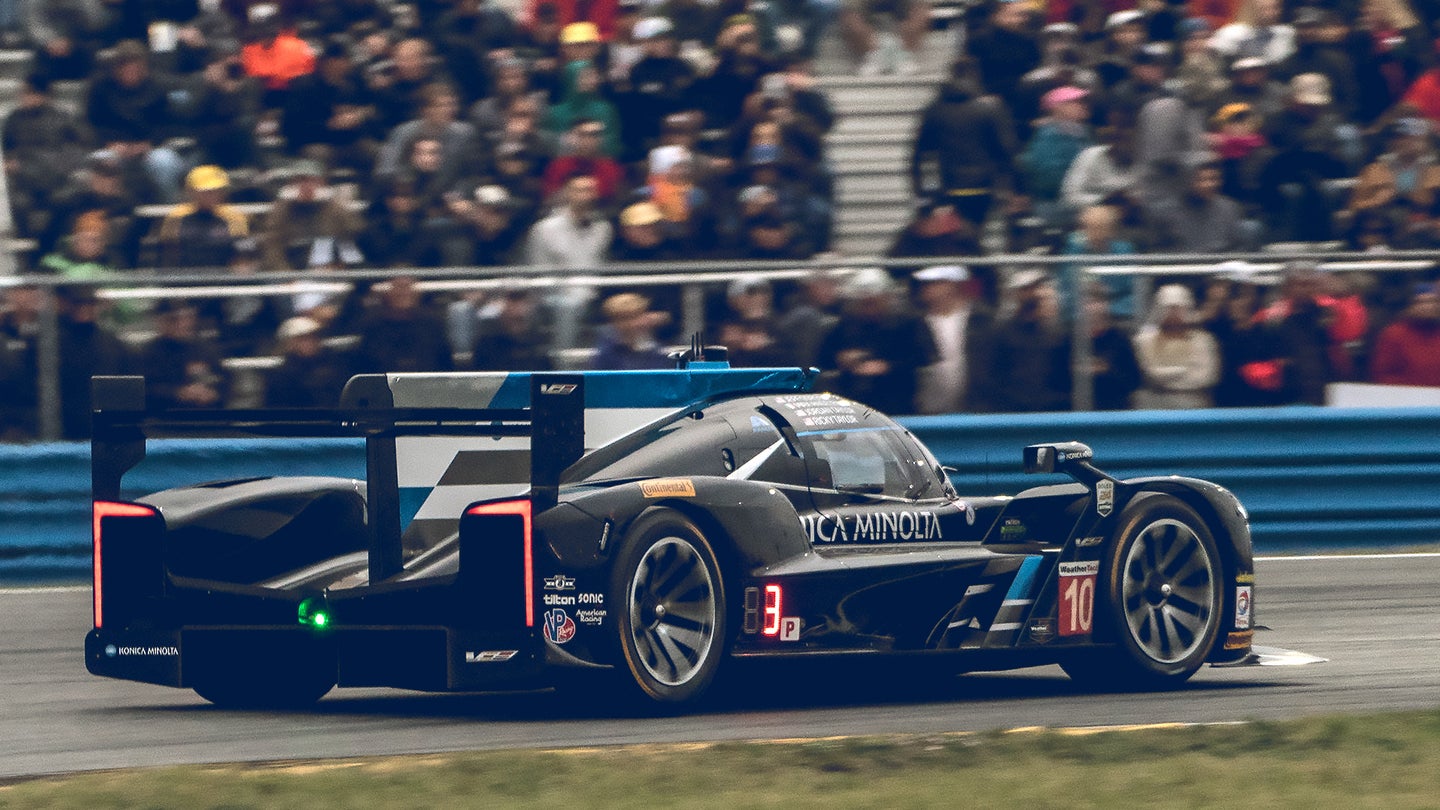 Daybreak over Daytona was as clear and bright as you could ever ask for. Perfect racing weather for a Rolex 24. Cool. Quick. By noon clouds had shifted overhead, and by the 2:30pm race start teams were already speculating on the outcome, should rain start rolling in. Just a few laps later, it's apparent that it will.

From the start it was apparent that the Cadillac DPi-V.R racers were in the hunt for an overall victory. Driver lineups for the handsome prototypes include veteran endurance racers like Joao Barbosa, Christian Fittipaldi and Filipe Albuquerque, who will helm the Mustang Sampling-sponsored car. The Konica Minolta Cadillac entry showed up with the star power of Jeff Gordon in their lineup, and rounded it out with talented brothers Ricky and Jordan Taylor, and veteran Max Angelelli.

With three cars entered and two holding down the front of the grid, reliability seemed to be the only thing that could hold back the new Cadillac.

The first real surprise of race day was a big one: Five-time Daytona winner Scott Pruett spun and hit a wall in the infield, knocking the number 14 Lexus out of the race with less than two hours elapsed. While Pruett walked away from the wreck, the impact has to be a big disappointment to the nascent Lexus GTD program.

Mostly green flag racing continued under darkening skies into the third hour of the race. As predicted, the Cadillacs were swapping leads up front, not battling so much as overtaking in the pits. The best racing though, was in the ranks of the GTD cars, which saw the lead change hands with increasing and sometimes relentless pace. Jules Gounon, behind the wheel of the Audi R8 LMS GT3, led the class—but Gunnar Jeanette in the Mercedes and Matteo Cressoni in the Ferrari were both on the same lap, and well within reach by the time Daytona saw its third full-course yellow, with the departure of the Park Place GTD Porsche and the Starworks PC car into a tire wall.

Back up front, the Cadillacs were still putting in fliers. Angelelli in the Konica Minolta car set the fastest lap of the event, Albuquerque, in the Mustang Sampling car, took the honors out from under him just two minutes later. Cool ambient temperatures helped keep tires in fine fettle. With darkness coming on and the smell of rain in the air, teams stretched tire changes and set up for the likelihood of rain tires.

And then yellow flags descend on Daytona like rain.

The night is a grind. For fans. For drivers. For crews. It's cold, it's wet, it's miserable. Miserable even by endurance racing standards. With the field slowed, the excitement of attrition and passing takes a back seat to endless droning laps. The onboard footage is horrific. Visibility goes right out the window. Windshields look opaque. For the fans holding court in the infield, Daytona's typically jovial overnight tailgating atmosphere is subdued and soggy. Beer is well consumed, hands are warmed at firepits dug in Daytona's soft infield sand. But it's not the rowdy affair the Rolex 24 usually is on a typical night.

The grind goes on while the sane go to bed, but before they do, another big moment. At 10:20pm Filipe Albuquerque pulled into the pit, and just like that, NASCAR hero Jeff Gordon is leading the Rolex Daytona 24.

The GTD class is unbelievably competitive. Everyone takes their turn leading. Lexus. Acura. Porsche. Audi. Lamborghini. Mercedes. It's a field stacked with talent and the cars are remarkably evenly matched. The experienced drivers are earning their pay in GTD, and just you try and find a team without a sportscar star in its ranks. All night long and into the day, the gap from the leader is always, always, razor thin.

You settle into a grind in an endurance race. A methodical, fascinating, dangerous grind. There's some pleasure in it, racing after the soft fans go home. Crews snatch sleep whenever they can. Security guards are far more lenient, and interested spectators are occasionally among the few that ply the pits. But there's always action. Cars come in. Cars go out. Drivers battle visibility and a teflon-slick track surface. On fresh tires it looks absolutely deadly. Somehow, by 4:30, 47 cars are still in the hunt. The track goes under caution yet again at 4:45.

When dawn breaks it's still drizzling enough to soak your shoes and keep campers hidden in their tents and RV's. GLTM is looking to be a dogfight until the end. Six cars are on the class lead lap.

Cautions are so rampant through the morning that, at 6:30, the safety cars swap out, mid-lap. Because of fuel or fatigue or who knows what. A quick poll of endurance racing fans says volumes: Nobody's ever seen it happen.

In the infield, somehow, fans are rolling out of bed smiling. The narcotic droning of cars clicking off laps under caution had its predictable effect. Kim Bilar from Knoxville is cooking bacon. "I slept like a rock!" she laughs. Rain continues through the early morning. Full-course yellow flags wave for the jet dryers. The procession of cars skips the chicane so track crews can shove water around. Dozens of smoky new fires settle ash on the wet track.

The poor Mazda prototype burns in the pit. If you have any soul at all you're pulling for the Mazda boys. Seeing their pretty little racer smoldering and trailing a great line of oil behind it and covered in the leavings of a fire extinguisher is heartbreaking.

A little before noon the race passes another milestone: 7-hours of running under the yellow flag. But the weather's finally breaking. As the clock approaches noon racers are back on the pace.

2007 marked the fewest laps ever churned by the Rolex 24 at Daytona. 2017 will undercut that, but you'd never know looking at final hours of the race. With the track drying speeds skyrocket. The Cadillacs battle out front. They battle like all hell, too. Once again it's Filipe Albuquerque against the Taylor boys. It's Ricky this time, fighting like a wildcat, that's bringing the fight to the Portuguese driver.

With just fifteen minutes remaining the lead of the race has changed 40 times. It seems possible that it could happen again any minute.

But it was Wayne Taylor Racing's Cadillac DPi-V.R that beat Albuquerque on the last lap in a race that became a nailbiter in the end, against everyone's expectations—earning the hard working Angelelli a well deserved and emotional win in his final Rolex 24 at Daytona.