Following Tesla, an even bigger electric event in The Drive's backyard. 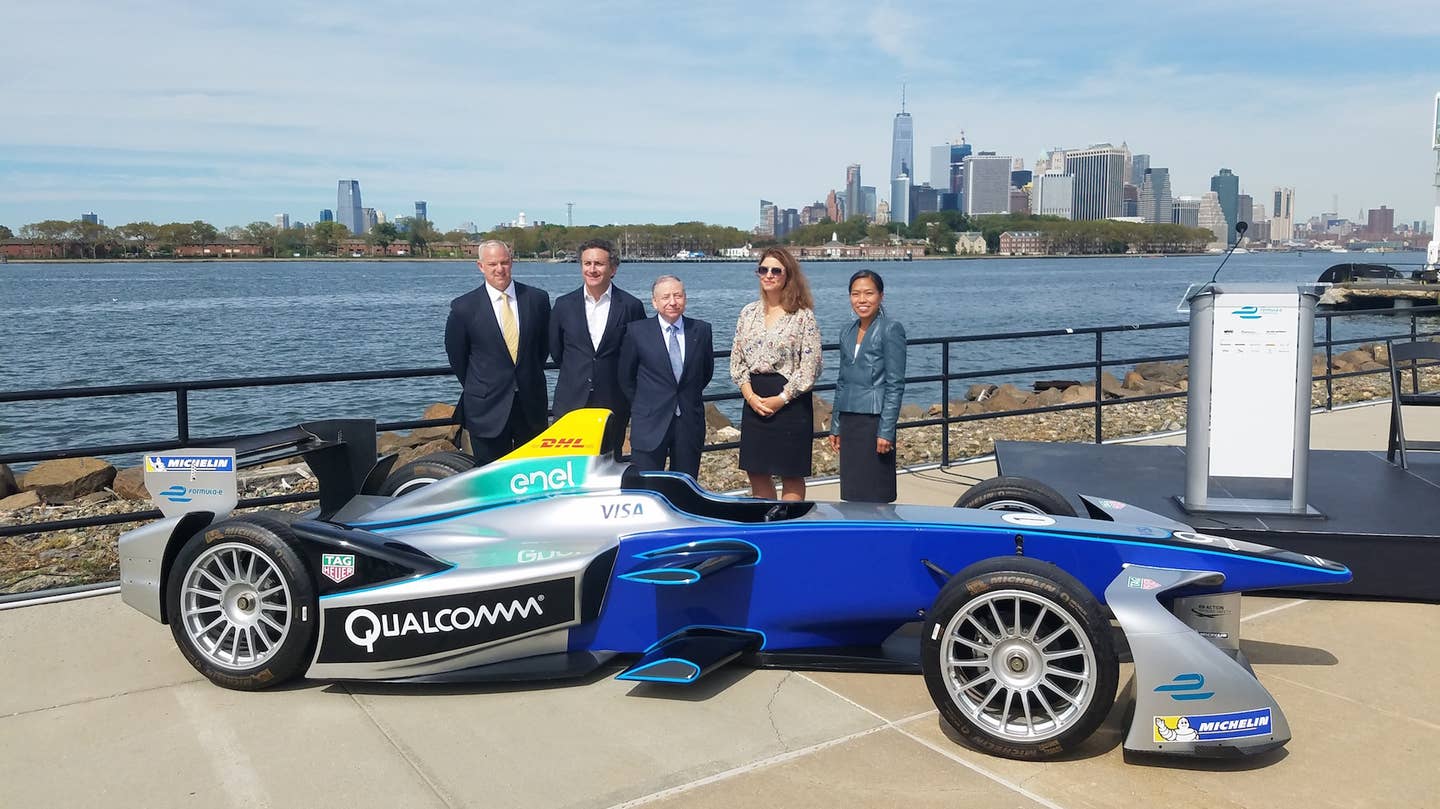 Start spreading the news, which you’ll have no trouble hearing over the whir of electric motors: Formula E, the electron-headed stepchild of Formula One, will stage a New York race along Brooklyn piers in July 2017—right in The Drive’s backyard.

“In 10 months, we will be here with 15,000 passionate fans,” declared FIA President Jean Todt at a press conference Wednesday at the Brooklyn Cruise Terminal.

Flanked by the soaring Manhattan skyline and the Statue of Liberty, Todt and Formula E and city officials trumpeted the 2017 New York City ePrix. Consider it a sequel to “On the Waterfront,” with the same gritty docks, looming cranes, and stacked shipping containers, but with a picturesque backdrop and zero emissions from electric racers humming on a repaved temporary circuit with 13 turns over 1.2 miles. If organizers pull it off, it will all take place in Brooklyn’s red-hot Red Hook neighborhood, a short walk from The Drive’s waterfront garage space. Red Hook’s new Tesla dealer is a stone’s throw away. Note to organizers: You’ll want to litter that joint with promotional leaflets.

“To race in New York City is a historic moment, not only for Formula E, but for motorsport in general, and again highlights the philosophy of Formula E to bring fully electric racing to the world’s greatest cities,” said Alejandro Agag, CEO of Formula E.

During the Bloomberg mayoral administration, Formula E officials had discussed staging a race in Manhattan’s Central Park, or on Governor’s Island in New York Harbor, just across the Buttermilk Channel from the Brooklyn Cruise Terminal. Now, citing the backing of Mayor Bill DeBlasio and other key players, race organizers have found what they call an ideal venue, in a safe and self-contained facility that includes no public streets.

“We were lucky to find this place in Brooklyn,” Agag said. “You have this amazing backdrop, and a closed perimeter with minimal noise and disruption.”

To see for myself, I drove my test Audi R8 V10 around some of the greasy, rough-and-tumble industrial roads, including a planned straightaway along Pier 11, then winding around the harbor’s Atlantic Basin to the concrete bunker Cruise Terminal, where some 1 million tourists embark and disembark each year. Monaco it ain’t.

But Lucas di Grassi, the former Formula One driver and now Audi Formula E pilot, said that while plenty of construction and sprucing up must be done, the location and city made sense.

“It’s a very interesting concept, a great view of the city and a lot of space to build a track,”di Grassi said. Cities like New York, he said, could be especially receptive to Formula E’s dual goals: to advance EV technology, and to underline that electricity is the future of mobility.

“This is the only form of racing with zero emissions, so New York is a perfect location, a place where electric cars can really help the environment.”

Di Grassi recently returned from the Arctic Circle north of Greenland with Agag, where a publicity stunt aimed to have him drive his racer atop a glacier. But the glacier ice, melting into rivers in a visible sign of climate change, had other plans, and di Grassi drove around the polar ice cap instead.

“The glacier broke apart and flipped just the day before,” di Grassi said. “Had it happened while we were on it, I probably would have been killed.”

Brave or bonkers—depending on one’s view of racing tradition, global warming, and the aural necessity of internal combustion—Formula E is humming into its third season, and shrugging off the hot emissions from critics. The series expects a boost from the arrival of Jaguar, which will enter Formula E as a manufacturer and team beginning this October in Hong Kong.

To boost its competitiveness and appeal, the FIA and Formula E have set an ambitious goal for 2018: “The next step is to have one car make the race, instead of two,” Todt said.

The series' current 28 kWh batteries from Williams Advanced Engineering get drivers only halfway home, forcing them to jump into a second, fully charged racer to complete their laps. A recent report in Motorsports.com claims that Porsche has submitted an application to supply the longer-lasting batteries for Formula E. At the press conference, Doug Bresnahan, chief marketing officer for Andretti Autosport, took a dubious view of that report, suggesting that teams like Jaguar would be leery of powering their cars with a battery from a high-profile rival.

For fool-me-once New Yorkers, the announcement raises another form of skepticism: Can Formula E wade into the swamp of interests in New York—environmental and local issues, bloodsport politics, and ruthless business—and come out clean to site, fund, promote, and stage a race in the long shadow of Manhattan? Formula E’s quest recalls the failed bids of its powerful fossil-fueled parent, Formula One. New York-area organizers and racing fans have held fast to a dream of seeing F1 cars blast along the waterfront, framed by the Manhattan skyline for pure televised bliss.

In 2011, New Jersey Governor Chris Christie proudly announced that Bernie Ecclestone’s traveling circus would hold the Grand Prix of America of Port Imperial on the Jersey streets along the Hudson River in summer 2013.

The following year, my New York Times auto editor, Norman Mayersohn, was even treated to a ride from Sebastian Vettel on the 3.2-mile temporary course, with police blocking intersections and running interference as the F1 champion executed a tail-out slide in an Infiniti G37.

But just months later, the 2013 race was postponed. A 2014 New York race was dropped from the official F1 calendar—the first time in F1’s 64-year history that a race had been canceled more than once. The deal dissolved in a stew of acrimony and finger-pointing, including Ecclestone’s insistence that organizers couldn’t come up with tens of millions of dollars required to pull off the event.

Formula E has had its own sustainability issues, including a Miami race that ran for all of one year, and the cancellation of a high-profile race in Long Beach, California, in 2017.

But Agag said that organizers could make it happen, and called Formula E and F1 entirely different propositions.

As Steve Cole Smith noted in The Drive, if Formula E could somehow fall near New York’s skyscraper forest—and enough fans managed to hear it—it might pave the way for an F1 race here. Ecclestone remains keen on the idea of F1 in the Big Apple; perhaps giving fans, whatever their feelings toward battery-based racing, a reason to root for Formula E. As Brooklyn locals (my own apartment is in Red Hook), count us among those crossing their fingers: The Drive can't wait to throw its first Formula E party. Of course you're invited.