Unable To Find A Suitable Venue In The Arctic, Formula E Heads To New York City

Announcement to be made this week. 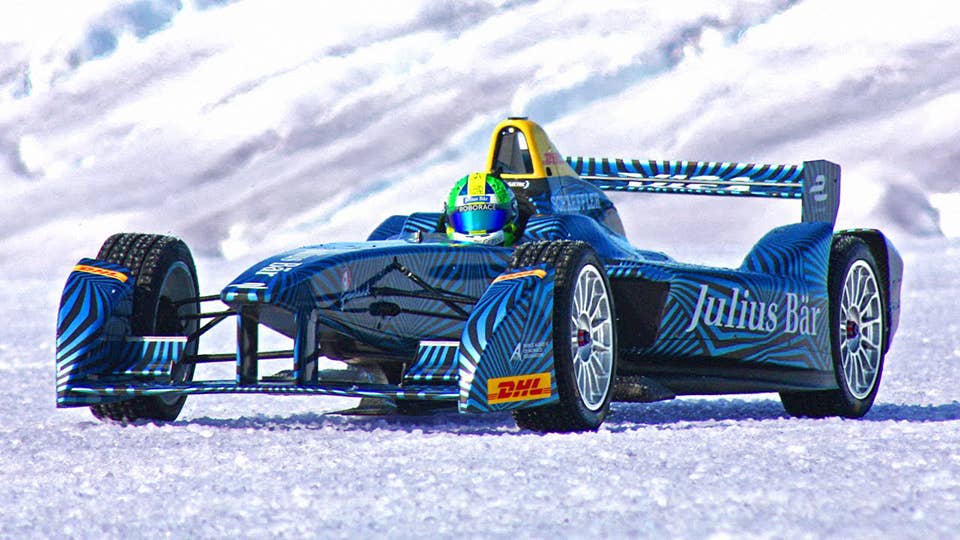 At the presentation two weeks ago in England of Jaguar’s official entry into Formula E, the all-electric formula racing series, Formula E CEO Alejandro Agag casually mentioned during his presentation that he had just returned from the Arctic, and…

At which point I turned to my friend in the next seat and asked, “Did he say he just returned from the Arctic?”

Agag didn’t fully flesh out why he was in the Arctic, and I forgot to ask him later, but it was all made clear when Formula E posted photos and videos of driver Lucas di Grassi “driving” around the polar ice cap inside the Arctic circle north of Greenland, which was probably the first time a Formula car driver ever wondered if there was a “warm suit” available. (To non-race fans: Drivers often wear a “cool suit” on hot days. It’s a joke!)

It was, of course, a publicity stunt: “I have four children and the future of the planet depends on how we can control the effect that human life is having on the environment and the climate. That is why I think climate change is very important to address, to control, to face, and everyone can do something. We do something for motorsport, other people can do something from whatever they do in their lives,” Agag said.

We are relived that when there is auto racing inside the Arctic circle, it will apparently be battery-powered, though being as how Formula E has to use two separate cars to finish a race as it is, just how long the batteries would last in the Arctic is a question that must be addressed. But since the audience would likely be penguins (are there penguins in the Arctic?), which are known to have very short attention spans when it comes to sporting events, probably the shorter the better.

We mention all this to alert you to the fact that Formula E, unable to find a suitable venue for Nanook of the North Grand Prix, apparently has in the vicinity of New York City, which will be announced in a few days. All they would tell us is that you can see the skyline of NYC from the track, which on some days you can pretty well manage from Utica, so if you are expecting Times Square to be shut down in Manhattan, that may not happen. Or maybe it will.

Formula E has not exactly been a runaway success in the U.S., as the Miami race lasted one event, and its presumed anchor event, Long Beach, is off the table for next year. Pulling off a successful event in New York would be a coup, and could help pave the way for one of those noisy Formula 1 races. Stay tuned.