Rain delays meant 37 laps Saturday, 463 today as they still had to dodge raindrops until the end. 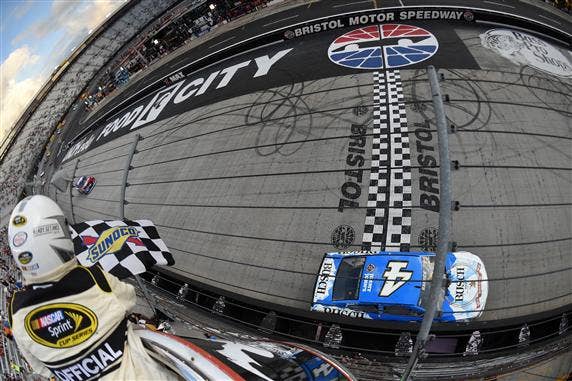 Rain dispatched the Bass Pro Shops NASCAR Sprint Cup race at Bristol Motor Speedway from Saturday night to Sunday, which sent the broadcast to the sports hinterlands of CNBC, and sent so many fans home that by the end of the race, roughly 24 hours after it started, the stands were virtually empty.

Until owner SMI and Bruton Smith figure out how to cover the half-mile Bristol Motor Speedway, which sounds like an absolutely fantastic idea, rain is something no oval track can tolerate – including Pocono, which was so saturated that IndyCar didn’t even try to get Sunday’s race in, postponing it to Monday, where it will run before a crowd you can probably count on several hands.

Anyway, the Bristol night race managed 37 laps before NASCAR gave up – there are few worse feelings for a sanctioning body to work hard to get the track dry, get the cars ready to go, then here comes another cloudburst – leaving the announcers to do everything but their vaudeville act to fill time. Look! Matt DiBendetto is wearing a blonde wig! That’s good for 10 minutes. And his middle name is Guido! Add two more minutes to make fun of that.

Anyway, when the checkered flag finally flew, Kevin Harvick had the field covered. He did the obligatory burnouts with his car owner Tony Stewart, making his last Bristol appearance, and it didn’t look contrived at all (cough).

“I’ve got to thank Busch Beer, Jimmy John’s, Chevrolet, and Mobil 1 and everybody at Stewart-Haas Racing on this Chevrolet,” Harvick revealed in victory lane. At least there are free Bloomin’ Onions at Outback Monday. (That promotion started with Ryan Newman, giving away a free Bloomin’ Onion on the Monday after a top-10 finish. He didn’t have many. Harvick has had 19 this year. That’s a lot of Bloomin’ Onions. No wonder the waiter never mentions the free BO until you do.)

Second was Ricky Stenhouse, Jr., in a solid run in his Bryan Clauson tribute car, which Kyle Larson also ran. Clauson was the mostly dirt-track driver killed last week in a midget car crash at age 27. Good for Stenhouse. Girlfriend Danica Patrick was her usual 22nd.

Also notable was the fifth-place finisher, Chris Buescher, the surprise winner at Pocono – he happened to be out front when the rain fell and the race was ended. Now he needs to be in the top 30 in points to make the Chase for the Championship, and his good result today puts him in 30th.

Bristol, at its worst, is entertaining, and at its best, downright compelling. Today’s race – and yesterday’s part – was entertaining. That’ll have to do.