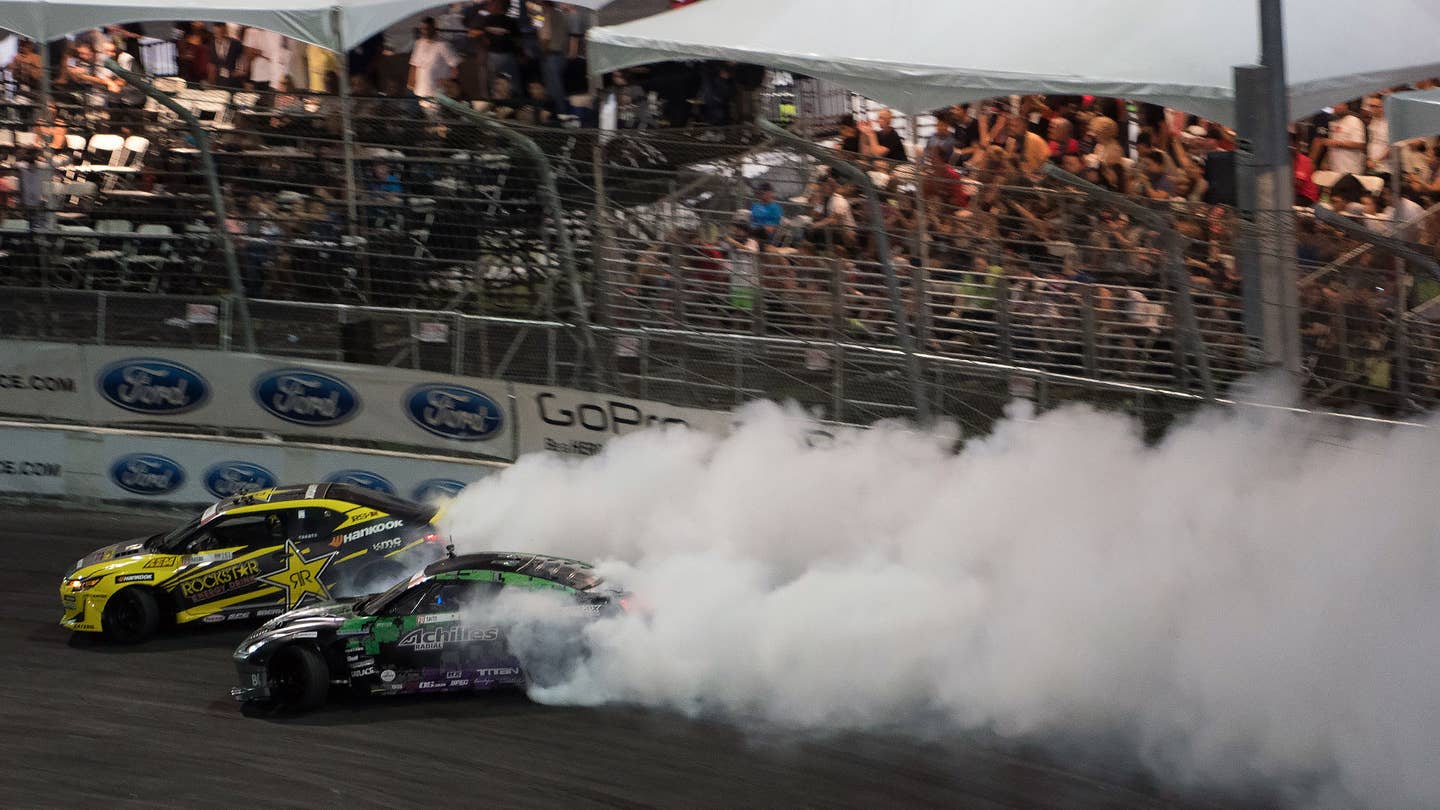 Great clouds boil, escape made impossible by packed grandstands. The white, burned-hair funk of tire smoke settles onto sweating skin of every age, sex, and color, all united by grit and noise, standing and cheering. Two cars atomize tens of thousands of miles of perfectly good tire before one driver’s subtle misstep erases tens of thousands of dollars of bodywork with a deafening impact on the Irwindale Speedway banking. The crowd leaps to its feet, cheering hard enough to drown the wail of the victorious remaining driver and his engine.

And for the first time, I feel like both gladiator and Roman. My skin reeked of rubber smoke before I’d even spun Irwindale’s turnstiles. After years of focusing my interests elsewhere, ignoring the pop-culture film frenzy for racing, I’ve gone drifting. And I’m hooked.

Funny how a fella can be humbled by little thing like a donut. Maybe you've inked a hundred in your lifetime. Maybe you've turned them into graceful, lazy figure-eights. Still, if you don't aim them at a goal besides smoke and noise, you still don't know a damned thing about drifting. Taka Aono does. His skin scorched into a tan, deep creases around his eyes from squinting laughing and smoking cigarettes, often at once. Aono passes through my view every 180-degrees as I try to hone and control years of bad donut-making habits.

Aono's English is imperfect. Probably because his sign language skills are impeccable. Right hand down. Smooth on the throttle. Left hand out the window. Less input. He’s my guide to understanding the mechanics of this mad thing. And the nuance. Aono rode the first wave of drifting’s swell into Los Angeles. Parlayed its growth into a competitive career. Now he’s an elder statesman of the sport. Teaching acolytes from his sun-soaked skidpad school at Willow Springs. A perfect ambassador.

The school car is made for this, a drifter-chic Nissan 240SX with a VQ engine plucked from a 350Z stuffed under the hood. There’s steering lock in excess, and more than enough power to spin the tires. It’s loud. Smoky. Like trying to refine and perfect a riot. By noon Aono has me connecting cones perfectly. Two, then three. He moves them further as the yowling Nissan under me glides sideways under ever more thoughtful prodding, so that the course changes as I learn. It’s not easy, not by any yardstick. There are more lazy spins and hair-pulling losses of momentum than I can count. But it comes together. Minutes later, the tires are melted to the cords and a bemused Aono encourages me to beat on them until they give up. Which they do. Which is glorious.

I'm the problem. The truculent established holdout. It’s a thought that occurs to me over lunch with Formula Drift founder Jim Liaw. He breezes in, hair slicked, tan and bespectacled. Showing early signs of the same tiresmoke and sun lines as Aono. An affable and focused true-believer. He’s breaking down the numbers behind the success of his series, and they’re astonishing. Thirty-two drivers. A nascent cable contract. Two-million Facebook followers. Exactly one billboard. The packed bleachers at Irwindale? A capacity crowd of 10,000. IndyCar optimistically estimated the same number for its June blowout at nearby California Speedway. The dismal attendance was enough to keep Auto Club Speedway off the IndyCar calendar this year. And, yet, just 30 miles away, fueled by social media, energy drinks and a ton of optimism, Formula Drift is thriving. It’s a motorsports success story seldom covered by motorsport magazines, almost foreign to print and never in the news. Still. How did I miss all this?

High above the track action I stumble into Formula Drift’s broadcast booth. The roar of the track and crowd makes the wall-to-wall glass tremble. The broadcast crew somehow manages crescendo after crescendo, detailing a level of subtlety that’s invisible from the bleachers. Three judges sit near the windows. Scoring Mike Whiddett and his obscene thousand-horsepower Miata against Ryan Tuerck and his Scion is childsplay. Brake lights flash. Tuerck pokes his nose up Whiddett’s skirts, scrapes off his bumper, then gets suckered into the wall in a great plume of smoke. But the later judging that gives Norwegian Fredric Aasbo the edge over Whiddett? It’s completely opaque to me. I learn the same things that make Formula Drift subjective make it insider-y, and make the initiated possessive. The buzz in the line for beer echoes the buzz in the broadcast booth.

Drivers are rewarded for pushing. That's the important thing. Pushing their opponent deeper into a corner. Further sideways. Faster and harder. On a good run both drivers spend more time looking out their side windows than the front. A good run places two, thousand-horsepower machines inches from each other. Sees them swing sideways in unison. That's when it's too close for your average spectator to call; and when the drivers pull off the course the judges confer and hand down a victory. But most of the time? Most of the time you know.

It’s been here all along, really. Growing. Building a fanbase under glaring stadium lights and the same sunset that falls on the too-quiet Petersen Museum and the empty Auto Club Speedway. Expanding to international venues. Japan. Canada. And laying rubber all over IndyCar’s Long Beach road course when the season kicks off on April 8th. And little old Irwindale? It’s humming. Maybe from tension. From close calls with the wrecking ball. The middle of nowhere track, hovering over the rim of a strip mine, dodges death every year, its proximity to a highway makes the location more valuable as a strip mall. It feels like the last time the big leagues of drifting will visit the venue where it all started. Somehow, Irwindale makes the calendar again in 2016.

In the home of American competitive drifting, the same parking lot where I learned to make my figure-eights graceful and learned to look over my shoulder while sliding a car sideways, I start to look for the inky black rings I left behind. They’ve disappeared, mostly. Lost under the crush of cars and car show and vendor stands and tire changing machines that is the Formula Drift paddock. A car fires up, crackling, and lumbers through the crowd, and its departure exposes my hard work. Those tracks? Those lessons in drifting and not taking things for granted? They’re mine, and I’m proud of them.