Harvick beat out polesitter and race-long rival Ryan Blaney to win the AAA Texas 500 on Sunday. 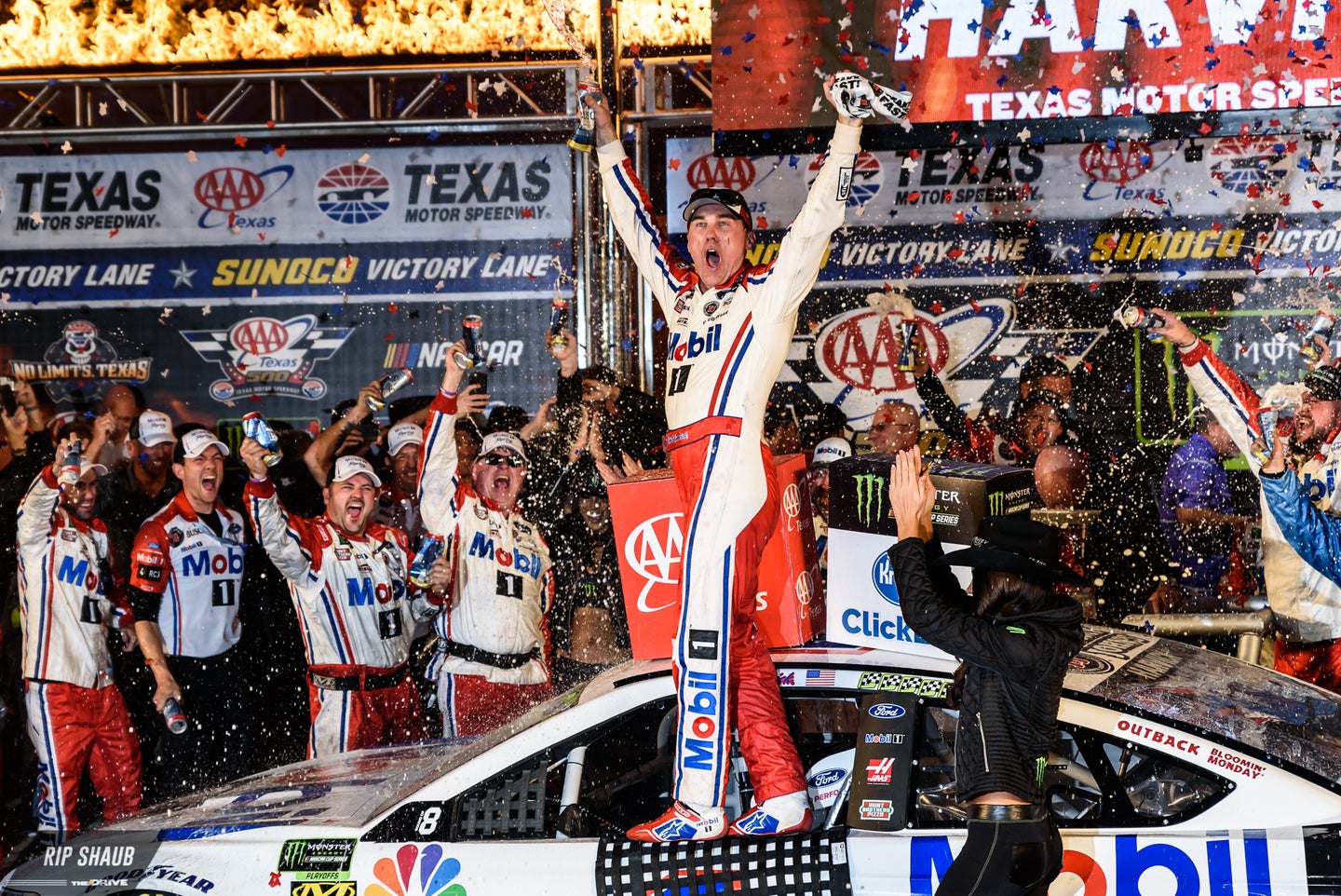 Kevin Harvick continued his Texas hot streak by winning Sunday's NASCAR Cup Series event and advancing to the Championship Round of 4. His domination of the race around Texas Motor Speedway's 1.5-mile oval provided him the goods to fight for his second Cup Series title come time for the season finale at Miami-Homestead Speedway.

Polesitter Ryan Blaney performed a getaway after the initial green flag waved, creating distance between himself and the rest of the field. Clint Bowyer, who started in second place, drifted back as did Denny Hamlin when the two collided, leading to early pit stops for both drivers who fell of the lead lap early on. Stewart-Haas Racing's Harvick commandeered second place and was quickly trailed by Kyle Busch in the No. 18 Toyota.

By Lap 20, the frontrunners began to encounter lapped traffic.

A competition caution was issued on Lap 31, allowing drivers to stop without the worry of losing major track position. Harvick exited pit road in first place and was followed by his SHR teammate Kurt Busch who would muster up the speed to challenge Harvick during the restart. Meanwhile, Kyle Busch and Brad Keselowski were dealt speeding penalties on pit lane and had to move to the back of the pack.

Harvick, who stayed dedicated to the low line, was pacing the field while his competitors were making moves inside the top-10. Team Penske driver and Martinsville winner Joey Logano nudged his way into the top three with 25 laps to go in Stage 1, and Kyle Busch made quick work by passing Chase Elliott and eventually moving to seventh by Lap 86.

Kevin Harvick was in P1 at the end of the first stage, marking the third-straight race at Texas Motor Speedway in which he claimed a stage victory.

Drivers entered the pits between Stage 1 and 2 with Harvick and Kurt Busch leaving the pits in first and second once again, this time followed by Erik Jones in third place.

Upon the restart, Kurt Busch made significant strides and passed Harvick, though he quickly ceded the position and was racing wheel-to-wheel with Logano for second. Midway through Stage 2, Logano moved past Busch while Harvick remained in clean air at the front.

By this time, Martin Truex Jr. had moved into fifth after starting at the rear due to a pre-race engine change. The 2017 NASCAR Cup Series champion showed his motivation that was sparked by last week's playoff finish where he and Logano clashed, forcing him to relinquish the lead and end up in third.

The third caution of the day occurred when Hendrick Motorsports teammates Jimmie Johnson and William Byron came together on Lap 97, leading to a four-lap yellow flag period. This bunched up the field and allowed Logano to line up beside Harvick where he would go around the No. 4 Ford driver on the outside, soon giving back the spot as Harvick remained true to the white line.

Logano stayed out while Harvick entered the pits, allowing a bit of breathing room for the Penske driver and throwing a monkey wrench in the top three. The No. 22 Ford would eventually pit on Lap 153, and Harvick would move to the front again with 10 laps to go in the stage.

At the end of Lap 171, it was Harvick who won yet another stage—his 18th of the year.

Keselowski's Team Penske crew played their cards right and moved to the front under caution. He was able to pull away from Logano and Harvick on the final stage restart, soon being accompanied by Ryan Blaney as Penske drivers ran 1-2-3 on Lap 181.

Halfway through the final stage, Keselowski would fall victim to a loose wheel and drop outside the top-10, leaving the usual pack of Harvick, Logano, and Blaney to duke it out. Stewart-Haas' Aric Almirola also approached the top three before pitting on Lap 282. Harvick and Blaney would then pit on the next lap, Logano also coming in on trip number 284 'round TMS.

A caution with 38 laps to go created an interesting kink in the pit strategy of many who debated whether or not to pit for tires and fuel, that being the looming question mark throughout Sunday's race.

Logano flew off-line on the restart as Harvick got a stellar jump to beat Blaney. Kurt Busch found himself in third as a result, giving the Las Vegas-native an opportunity to advance in the running order. However, a three-car incident involving Bubba Wallace, Chris Buescher, and Matt Dibenedetto caused headache for more than just the latter who suffered major damage late in the race. The consequential caution soon ended but the race didn't run green for long as the No. 97 Toyota of David Starr spun, sending the contest into overtime. This became the decider of the playoff Round of 8 race.

Kevin Harvick stayed ahead of Blaney and Logano when things went green for a clean sweep of the afternoon, gaining a heap of points while also securing his spot in the championship round at Miami-Homestead on Nov. 18.

"We've been working day after day to make speed," Harvick explained after the checkered flag. "This place has been really good to me. We finally knocked that barrier (win) down (last fall) and win in front of all these fans at Texas. So, thank you guys!"

"The expectations are to win. Like I told you guys before the race, we don't race for points, we race for wins. We don't count our fingers and or toes trying to figure out how to make it in. Today we earned our way in and we're going to race again next week and try to win another race and then see what we can do at Homestead," Harvick concluded.

The NASCAR Cup Series will make its second-to-last stop of the season by visiting Phoenix ISM Raceway on Nov. 11 which will decide who moves on to the championship round of four at Homestead-Miami. Kevin Harvick won the May race at the track and Matt Kenseth is the reigning victor of the fall race in Arizona.

Fords line up in the top five spots to start the AAA Texas 500.