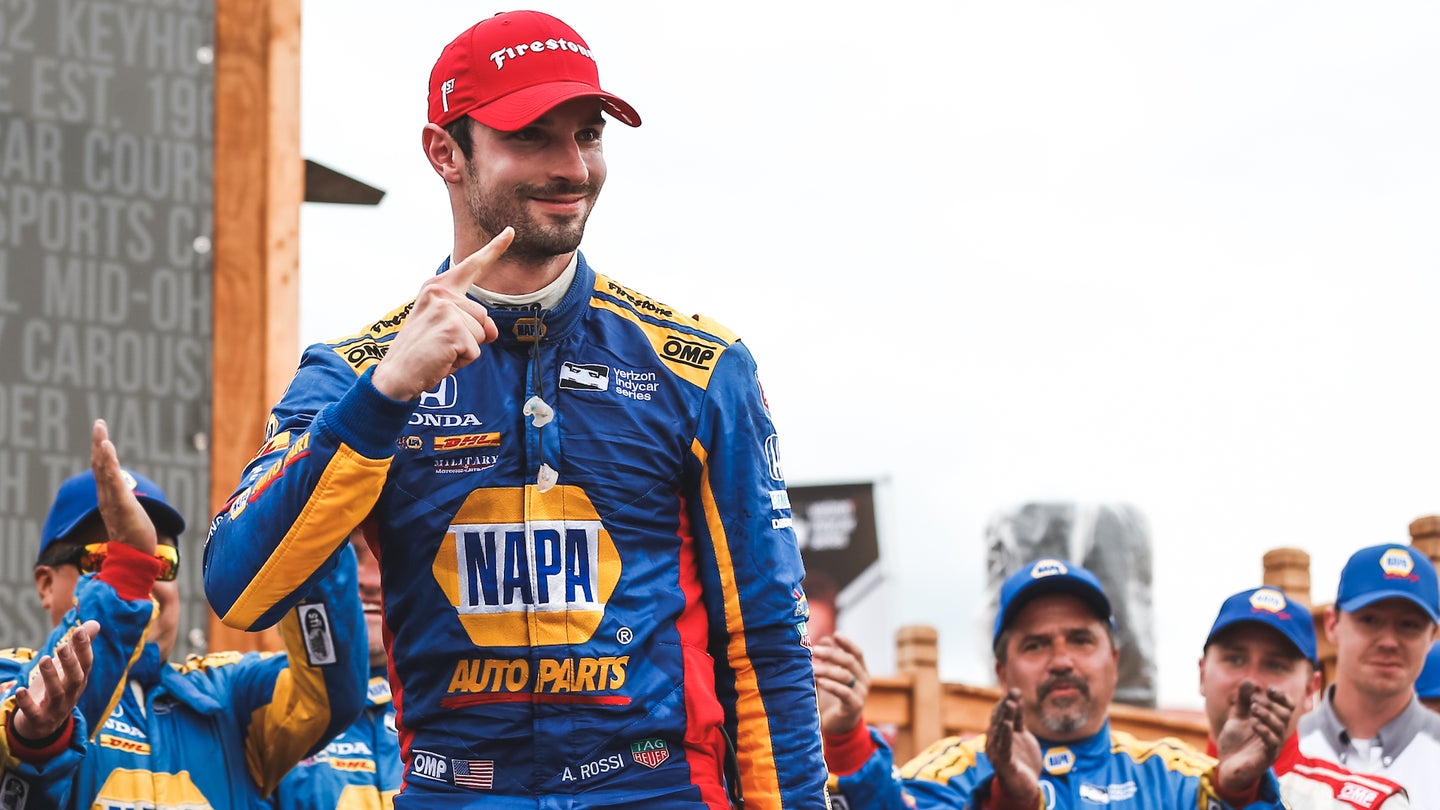 Andretti Autosport’s Alexander Rossi was the man in control of Sunday’s IndyCar race at the Mid-Ohio Sports Car Course where he drove his Honda-powered racer to victory lane. Schmidt Peterson’s Robert Wickens and Team Penske’s Will Power followed in second and third place, respectively.

The 90-lap race got off to a thrilling start with Rossi rocketing ahead from pole and the duo of Power and Ryan Hunter-Reay lining up right behind him for the opening lap. However, Hunter-Reay was forced off the racing line to avoid running into the back of Power, and Wickens quickly consolidated on the American’s hiccup.

Further down the grid, it was Rahal Letterman Lanigan’s Takuma Sato who, after making a heck of a start and passing his teammate Graham Rahal early on, found himself pointing the wrong way down Mid-Ohio after being punted by Carlin’s Max Chilton on Turn 5. The unnecessary stunt ruined both of the drivers’ races. Sato, who qualified in the top ten, would go on to finish 17th, while Chilton was assessed a drive-through penalty for avoidable contact.

"I overtook a couple of cars and was P6, and there were only a few cars in front and it all looked good, but on the second lap in Turn 4, I know Chilton was on push-to-pass and was coming, so I left one car space into Turn 4 and it was all good," said Sato. "On the exit of Turn 4, somehow he clipped me from behind and I got spun from that. After that, I never recovered in the race."

Things began heating up once again at the half-way mark when it became clear that Andretti Autosport had Rossi on a two-stop strategy, while the rest of the field had was on a three-stopper. Hunter-Reay, Scott Dixon, Wickens, and Newgarden all stopped for tires and fuel between Laps 38 and 45, leaving them room for one more quick stop before the checkered flag, while Rossi managed his rubber and fuel consumption until lap 59 when he made his second and last full-service pit stop. At some point Power attempted a switch-over, but ended up stopping on lap 49 and couldn’t make the new strategy work.

The closing stages of the race saw some action in the midfield with Dale Coyne Racing’s Sebastien Bourdais passing Team Penske’s Pagenaud for seventh place and, a few laps later, Hunter-Reay for sixth. Once it was said and done, Bourdais climbed from dead last to sixth place on Sunday. However, no one could match Rossi’s racecraft at the legendary road course known for its challenging and undulating corners.

"Today was making up for a big mess up yesterday," said Bourdais. "It's sad, as this car could have been a winner today with our pace. It was a heck of drive and I don't think it gets much better than that going from 24th to sixth in a straight-up fight on a track that's difficult to pass."

Despite a difficult day for the New Zealander, Dixon still leads the championship with 494 points over Rossi’s 448. Meanwhile, reigning champion Newgarden sits in the third spot with 434 points.

"We said coming into this weekend that we have to execute for five weekends in a row, this is the start of that, hopefully," said Rossi. "They gave me an amazing race car and this one's for them. It was great strategy all day. We could make a two-stop if we committed early and that's what we did. Great fuel mileage from Honda, great tire life from Firestone, so an all-around perfect day."