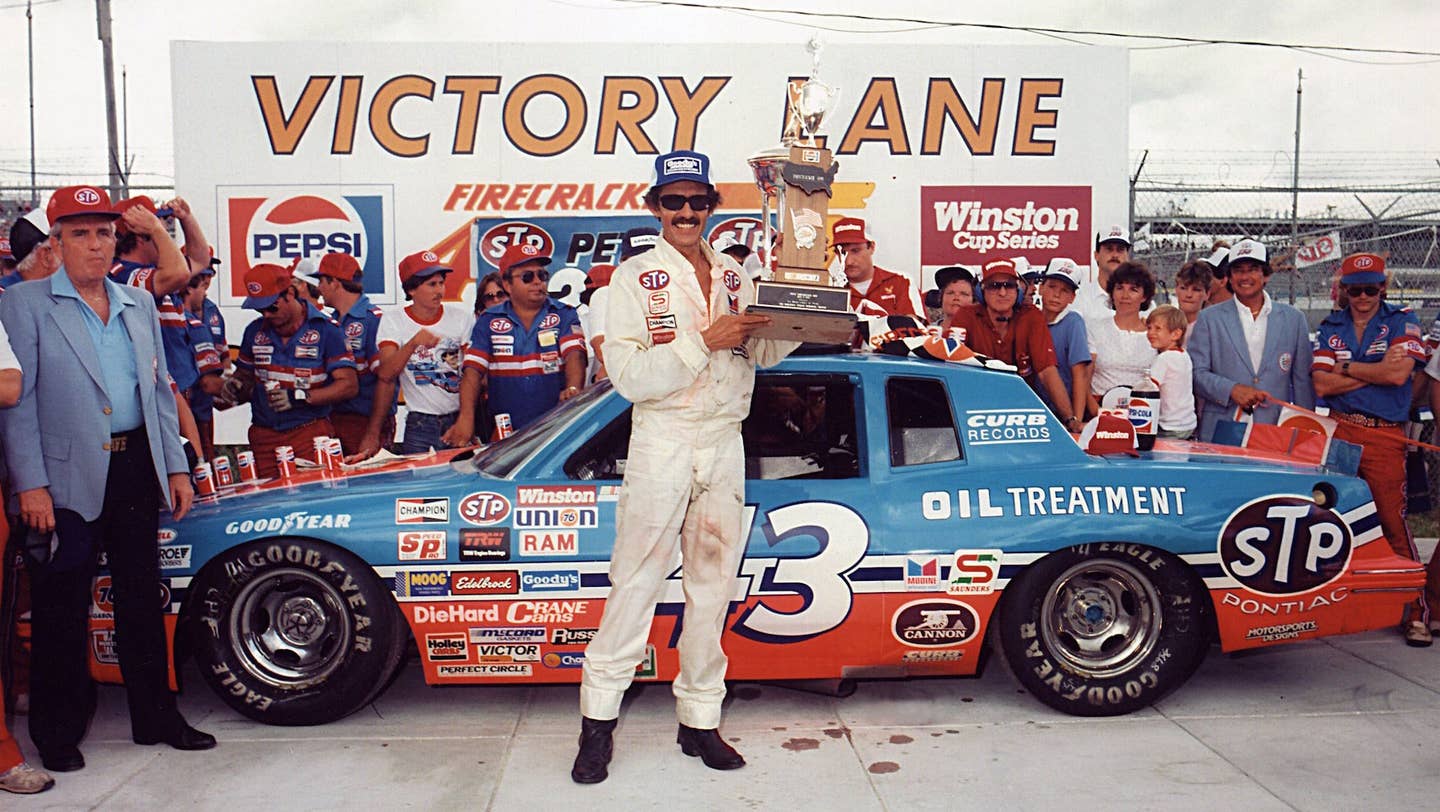 There’s nothing else like him in professional athletics, a singular figure who embodies the history of a major American sport. Richard Petty ran in the very first Daytona 500 as a rookie (his dad Lee won), back in 1959. He captured the NASCAR championship seven times, a feat only matched by the late Dale Earnhardt. He took 200 checkered flags (a record); seven Daytona 500s (a record); 10 consecutive races and 27 in a season (both records). And, he endured two crashes so horrifying that, when you watch the footage, you can’t believe that he would have had any chance of survival.

His father Lee was a star. His son Kyle is a star. But neither can match the death-defying glory of The King.

Petty drove some of the most iconic racecars, from the 200-mph winged Plymouth Superbird to the STP “Petty Blue” and orange Oldsmobile, in which he won the infamous 1979 Daytona 500. With his shades, cowboy hat, and trademark mustache, he presides as the rebel persona, the very face of stock car racing to this day. And, at 78, he still lives in the same little town where he attended high school, in the state of North Carolina, NASCAR’s spiritual home.

As America’s biggest racing series motors into this weekend’s season-opening Daytona 500, The Drive caught up with The King to talk over his greatest moments.

At the first Daytona 500, it was clear right away: This was going to be a special event. The track was brand new. “It was the biggest thing that we’d ever seen,” Petty remembers. “You came through the tunnel at Daytona and it just seemed like it was miles to Turn One. And the banking was the steepest we’d seen too. It was just a massive place and a really big race.”

Petty was a rookie, and his No. 43 Oldsmobile convertible made it all of eight laps before quitting. So he jumped in with the pit crew for his dad Lee’s car. Shockingly, the race ended in a tie, between Lee Petty and Johnny Beauchamp. Lee Petty was awarded the race days later after NASCAR founder Bill France Sr. saw footage of the finish. (In an era before the ubiquity of cameras, it took him that long to find some). “That was a really big deal for our family,” The King says. “It was special to have Daddy win it.”

By this time, the 30-year old had already captured his first NASCAR championship, as well as a pair of Daytona 500s. Midway through the season in 1967, Petty began to pile on the wins. Martinsville, Richmond, Darlington. Suddenly, his blue Plymouth was unbeatable, winning 10 races in a row between August and October—a streak that remains unmatched to this day. NASCAR competitors organized a “Beat Richard Petty Club.” He “has become a legend in his own time,” the Washington Post gushed.

“We didn’t think of it at the time,” Petty says today of the streak. “We’d win a race, but our goal was to immediately load up and get ready for the next one. We just had a really good team and everyone knew what to do.”

At season’s end, Petty had won 27 of 49 total races. It was during this season that he earned his famous nickname: The King.

Many fans consider this to be the greatest finish in stock car racing history. Petty was leading into the final lap, in his now-classic STP Plymouth. The race was live on ABC, with Jackie Stewart calling the play-by-play. Halfway through the last lap, David Pearson stole the front position. Heading into turn four, Petty took it back. Nose to nose, at the end of 500 miles of racing and—contact! Both cars spun, Petty hit the wall, and both skidded into the infield. Petty tried to restart his car. He was maybe 50 yards from the finish line. But his car stalled and wouldn’t start. “The crew came out and tried to get me going again but David had already crossed the line,” Petty recalls. “It was just fate.” Pearson scooted his busted machine past a checkered waving in the wind, as the crowd unleashed a roar that drowned out the race engines. “What a finish!” screamed Stewart into his microphone. “I’ve never seen anything like that!”

Petty had been hospitalized before that race with an ulcer. After the finish, he told reporters: “I guess I’ve got two ulcers now.”

If the 1976 Daytona 500 isn’t the greatest finish, then 1979 takes the prize—the year victory fell into The King’s lap. It was February 18. A huge east coast blizzard drove millions into their homes in front of their TV sets; for the first time, the Daytona 500 was aired live from flag to flag. On the final lap, Donnie Allison and Cale Yarborough were duking it out for the win when they made contact. Both cars tumbled into the infield, and there was Richard Petty, cruising along thinking the thing was over. On air, Ken Squier was calling the race: “Petty wins it! Down on pit road it has gone crazy!”

After the victory, Yarborough and Allison threw down in their now-famous live-on-TV fisticuffs, the brawl that made NASCAR a household name. Meanwhile… “You just couldn’t believe it,” Petty remembers. “We came around and had enough of a lead to win the race.” The King took his sixth Daytona 500.

“I’d say this was my biggest win,” Petty declares. And in a career spanning the better part of four decades behind the wheel, that’s saying something. It was Independence Day, at Daytona International Speedway. President Reagan gave the “Start Your Engines” command over the loudspeakers, calling in by phone from Air Force One. In the middle of the race, the President’s jet dramatically landed on the strip next to the track, so the fans and the cameras could see it touch down. He entered the speedway to find two generations of Petty—Richard, and his son Kyle—lapping at speed. “President Reagan, he couldn’t believe what he saw,” The King recalls. “Cars running that fast and beating and banging. He was caught up in the excitement.”

Petty won in dramatic fashion, beating Cale Yarborough but by just feet. It was his 200th victory. In a post-race interview, Petty and Reagan stood side-by-side. The President said: “I understand that no one in the whole history of racing has ever done that, won 200 races.” It was a storybook moment for The King: “Fate came together to make that day happen,” he says. And, as fate would also have it, his greatest moment was his last victory. His 200 wins has never been surpassed. And, even if it is someday, there’ll still only be one King.