When John Hunter Nemechek's engine blew on the final lap of the Overton's 225, Brett Moffitt took the win. 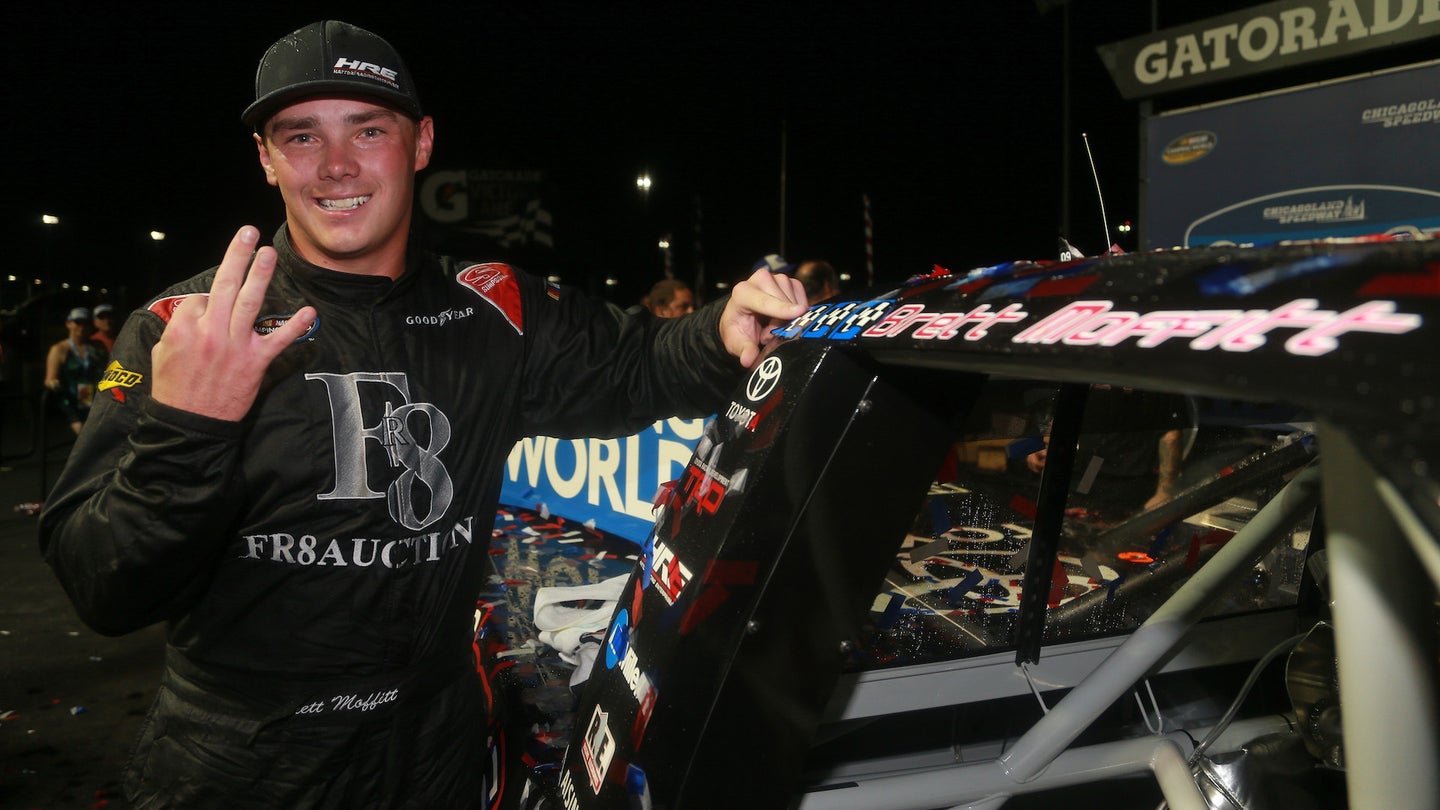 Brett Moffitt’s chances of being among the drivers competing for the 2018 NASCAR Camping World Truck Series championship in the series’ postseason playoffs remains up in the air, as his No. 16 Hattori Racing Enterprises team continues to struggle to line-up enough sponsorship to get to every race on the schedule. But Moffitt and company continue doing what they need to do to make themselves serious title contenders—winning races. Moffitt claimed his third win of the season Friday night in the Overton’s 225 at Chicagoland Speedway. Eleven races into the 2018 season, Moffitt is one of only two multi-race winners among Truck Series regulars, the other being former series champion Johnny Sauter with four.

“I have to thank Fr8Auctions, our partners at TRD and Toyota that have gotten us to this point in the year and Shige Hattori [team owner],” Moffitt said. “This is great. We didn’t know if we were coming like you said. To be here in victory lane, it’s an honor and a blessing. These guys work hard. I feel like we threw away a couple of wins this season. I hate it for the No. 8 [John Hunter Nemechek], whatever happened to him, but we’ll take it however we can get it right now.”

John Hunter Nemechek was the race leader with Moffitt in second as the white flag waved to signify the final lap, but after taking the penultimate flag, Nemechek’s engine blew, handing the lead over to Moffitt. Nemechek managed a seventh-place finish after leading a race-high 64 laps in the 150-lap race.

“Just don’t have any luck this year,” Nemechek said. “Tonight was a real heartbreak.”

Ben Rhodes finished second and Sauter was third after overcoming a slow pit stop and a return trip to pit road when his team had a problem with its jack during a lap 121 caution.

Nemechek and Noah Gragson were the stage winners. Nemechek won the first 35-lap stage after he took the lead on the final lap of the opening round.

Gragson, then, took the lead on the restart at the beginning of the second stage and led throughout its entirety. Sargeant, meanwhile, spun on lap 60 while running fifth. He wound up 20th at the finish, three laps down. Gragson finished fourth.

“I started off good and just didn’t have the grip that I needed there after the second stage,” Gragson said. “Just thankful to be out here racing. P4—we’ll take it, and it was a good points day.”

Most of Nemechek’s laps led came in the final 80-lap stage. He and Moffit exchanged the lead band-hand fourth throughout the stage, but Nemechek took control of the position after the sixth and final caution of the race on lap 121.

Up next: After a weekend off, the NASCAR Camping World Truck Series travels to Sparta, Kentucky for a rare Thursday night show, the Buckle Up in Your Truck 225, on July 12. Christopher Bell won last year’s race there.