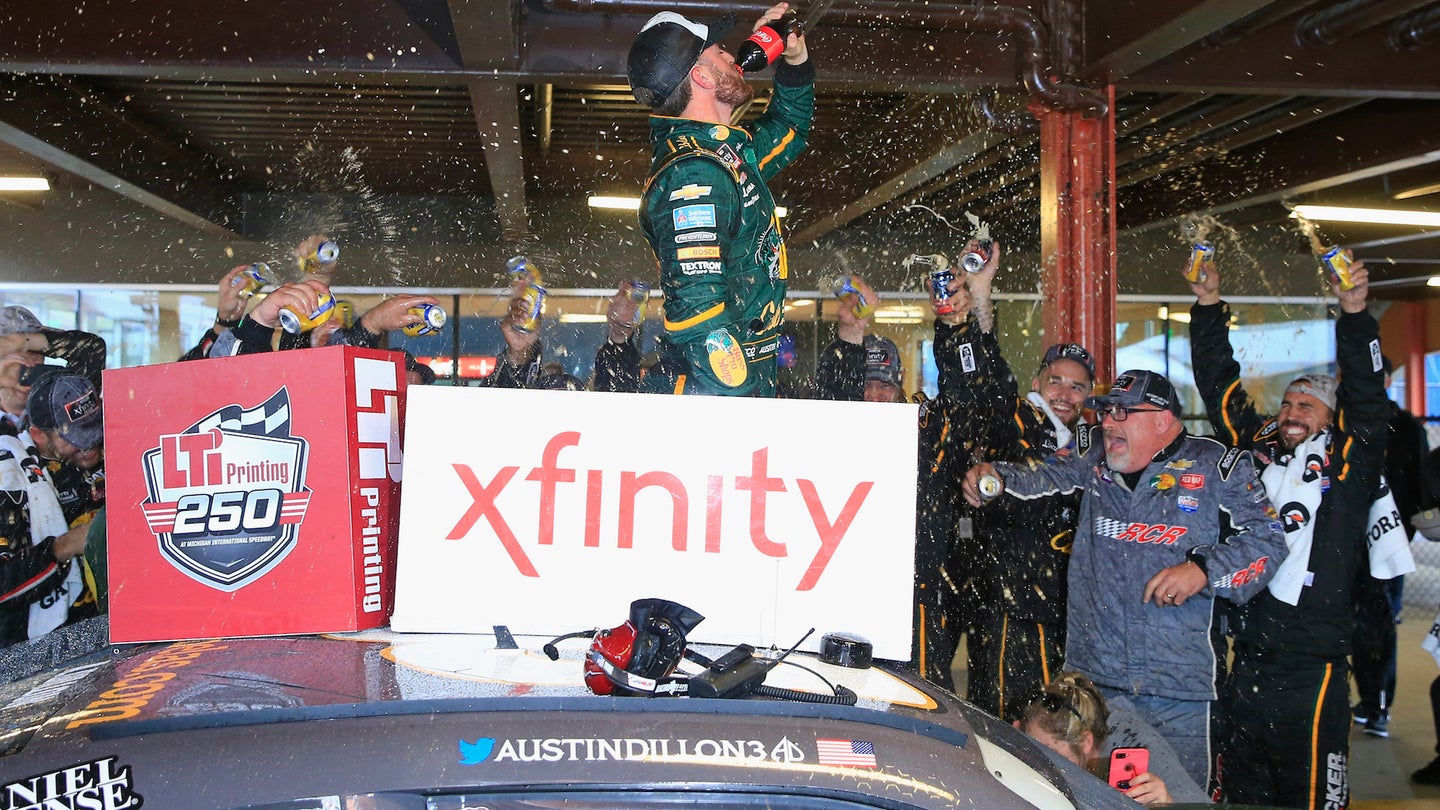 Rain made its mark on the NASCAR Xfinity Series schedule at Michigan International Speedway on Saturday, forcing the cancellation of qualifying, delaying the start of the 2018 LTi Printing by about three hours, and resulting in the shortening of the race from its planned distance of 125 laps to just 91. Austin Dillon counted on that rain when he elected to stay out on the race track during a string of late-race cautions instead of pitting for fuel. The rain came just in time with Dillon up front with a nearly dry fuel cell when the race was called “official” by NASCAR on lap 91.

"We definitely needed that win for our Xfinity Series team,” Dillon said. "It was great to have the 21 (Daniel Hemric) up there shoving me around. He had our back. If we didn't have the strategy, the rain coming, he was going to have a great shot to win also.”

"I promise the guy that finishes second is going to say they threw it [checkered flag] way too early, and I'm that guy today,” Hemric said. "I applaud them for saving race cars and all that stuff and get all these guys back home to their families tonight.”

Kyle Busch and Elliott Sadler were the two stage winners at laps 30 and 60. Busch started the race on the pole as a result of the starting grid being set by car owner points. He led 28 laps of the first 30-lap stage. Busch's 29 laps-led total bested the rest of the field and he wound up sixth at the finish.

Paul Menard, Alex Bowman, and Kevin Harvick each led laps in the second stage before a caution on lap 56. Sadler, running third at the time of the caution, inherited the lead by staying out and maintained that lead for one green-flag lap that remained in stage two.

Despite staying out during the previous caution, Sadler stayed out again at the end of the second stage, like Dillon, counting on rain to return to the track soon. Sadler's race headed south though on lap 73 when he was involved in an incident when Austin Cindric spun and Sadler made contact with Bowman. Sadler was able to continue but had to make an unscheduled pit stop for a cut tire not long after the race restarted. He wound up with a 30th-place finish, his first finish of the season outside the top-10.

Cole Custer, Ryan Reed, and Menard rounded out the top-five.

“Today we were just in the right place at the right time and had a great strategy,” Custer said. "I think my crew chief (Jeff Meendering) had a great strategy and got us track position at the end. Our Code 3 Ford Mustang was pretty solid. It was hard to pass, and you didn’t want to be on the bottom. We had some things go our way and ended up third, there.”