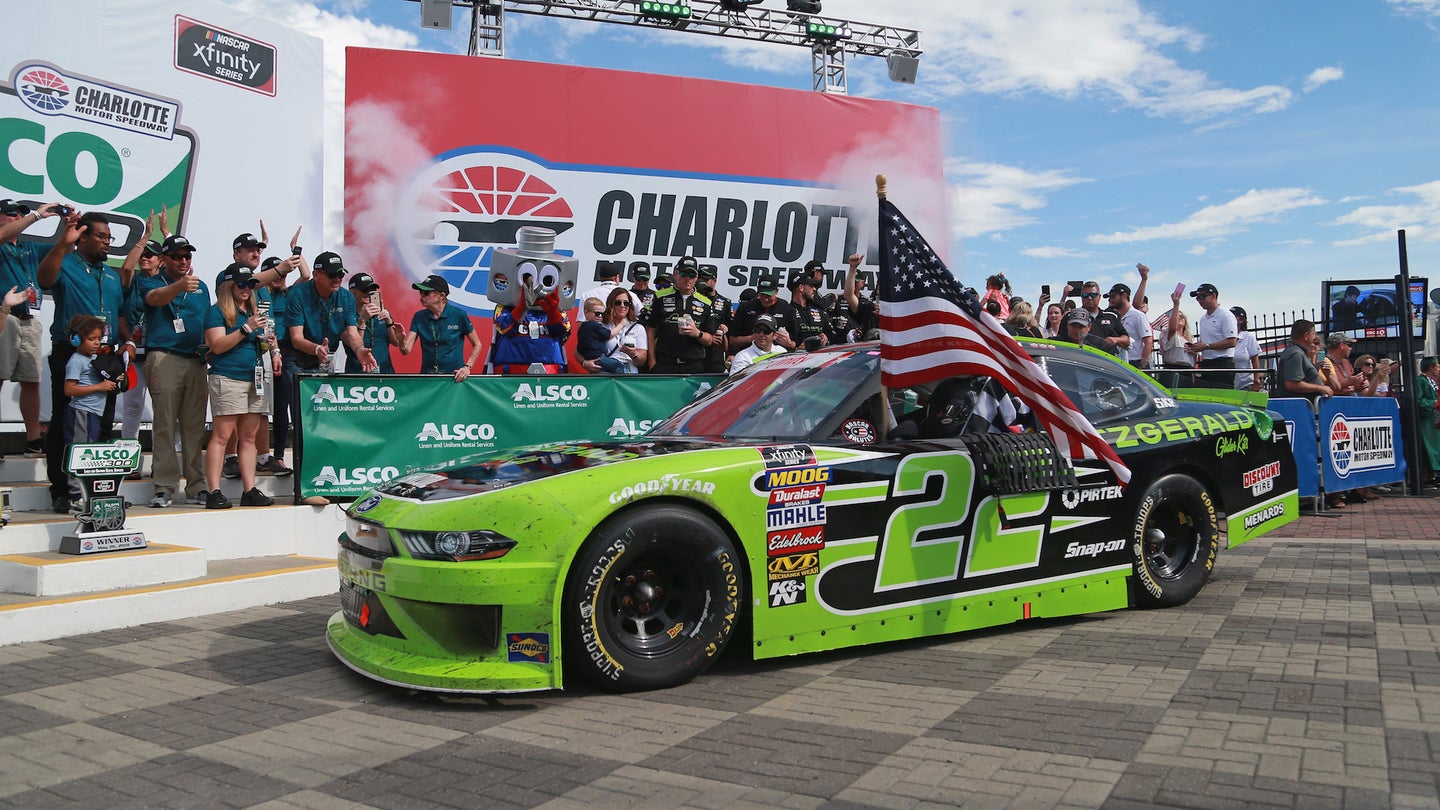 Brad Keselowski and Kyle Busch combined to lead 170 laps of the Alsco 300 at Charlotte Motor Speedway that was extended to a 204-lap distance Saturday before Keselowski took his second Xfinity Series win in only his second series start of 2018.

“It’s kind of an eventful day from the rain and everything that happened there,” Keselowski said.  “Strategies, the car handling and things going on this week with Roger [Penske, car owner] and the Hall of Fame, but so far it’s been a great week and I couldn’t ask for a much better start for Memorial Day Weekend than to bring home a win. I’m really proud of everyone on the team, Brian [Wilson, crew chief] here, and the sponsors, Fitzgerald Gliders and Ford, for the car that was well-prepared and in a spot to be able to execute a day like today, but I think it was definitely a perseverance day."

"It was brutally hot out there," Keselowski continued. "The humidity was just killer. I don’t usually get that hot in a race car, but it was smoking out there. There were a couple times where, I swear, the inside of the car was burning from the water and the humidity, but that’s just part of the challenge of racing on days like this and glad to bring it home first, that’s for sure.”

Busch, though, finished eighth after leading a race-high 93 laps as a result of a spin into the infield on a lap-162 restart. He got back on the lead lap during the 11th caution for a Justin Allgaier/Jamie McMurray incident on lap 181 and was back inside the top-10 by 10 laps to go in the 200-lap scheduled distance.

Busch, after taking the lead from pole-sitter Keselowski on a lap-27 restart, won both of the 45-lap stages that made up the first 90 laps of the race.

The only other significant lap leader in the race was Xfinity Series regular Cole Custer. He took the lead after a battle with Keselowski on lap 102 and led 29 laps before Busch and Keselowski took back over. Custer was the highest-finishing series regular in second.

“I wasn’t happy [about finishing second] because you want to win, but our Haas Automation Mustang was pretty good all weekend,” Custer said. ”I think they kind of got lucky on the strategy and how the cautions flew, but I think we probably had the best car. It is what it is. You give up the track position, but it was fun racing. It’s a real edgy race track and fun to move around the VHT and stuff, so it was a fun race for sure.”

Keselowski was back up front after staying out during a caution for a Tyler Reddick incident on lap 156. After retaking the lead, Keselowski ran up front for the remainder of the race.

Other top-10 finishers included Kaz Grala in 10th. Grala, since losing his ride with JGL Racing, introduced Fury Race cars to the Xfinity Series at Charlotte.

“This race was fantastic, Grala said. “It was a successful debut for [Fury Race Cars]. This car was great from when we unloaded, and we only got it better. Our balance at the end of the race was perfect. I can’t say enough about how hard everyone has worked. I don’t think anyone’s slept in the last week and a half. I hope they’re excited now because this made all their hard work pay off. Huge shout out to everyone at Fury Race Cars, Ford Performance, and Roush-Yates Engines. There’s a lot to be excited about from this race. I think I speak for everybody when we say that this was a wildly successful day for us. I’m looking forward to the next three races. We’re going to have a blast.”