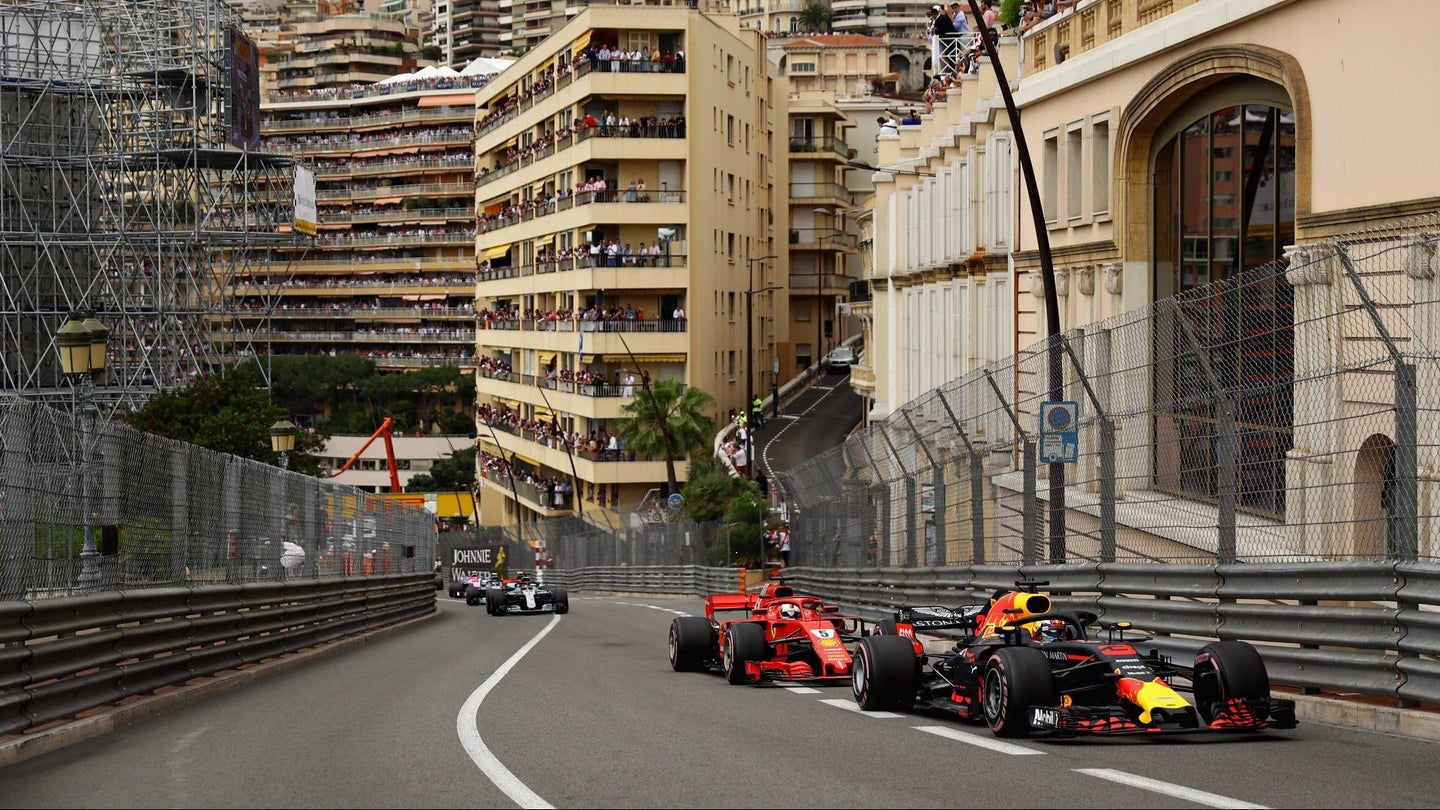 Daniel Ricciardo may have started from pole position in Monaco, but despite this advantage on the overtake-resistant street circuit, his race would prove anything but easy.

The Grand Prix's start went smoothly enough for Ricciardo, holding off pursuing Sebastian Vettel into the first corner, with a relative lack of drama in the race's opening lap, save for contact that damaged Brendon Hartley's front wing. Max Verstappen, starting from the back, would push past Kevin Magnussen, Romain Grosjean, Marcus Ericsson, and Lance Stroll in the first seven laps, making a recovery of a points finish look possible. Stroll would soon develop a puncture as a result of contact with Ericsson, and the Ricciardo-Vettel parade would have to dodge him on lap 10.

Lewis Hamilton kicked off the pit war with a stop after lap 12, emerging behind Esteban Ocon who allowed the Brit back past on lap 15 as Vettel dropped in for tires. Ricciardo would pit after lap 16, Kimi Räikkönen following, and emerge still in the lead. Despite Ricciardo claiming warmup issues, the handicaps of tire temperature problems presented themselves throughout the field and were not unique to Ricciardo.

Instead, a bigger problem presented itself on lap 28: Ricciardo reported he was "losing power" over team radio, which he confirmed after the race to be an MGU-K failure, worth 160 horsepower. Between this and the Renault engine's power surfeit, at least 50 horsepower according to preseason reports, the engine output gap was likely in the neighborhood of 210 horsepower. Despite having track position, even at Monaco, this looked like it could spell the end of his Grand Prix win chances.

His teammate complained of transmission problems, specifically downshift issues and rear-end lockup between second and third, and though no radio messages were heard at the time, Ricciardo later revealed he too had transmission problems and was driving with "just six gears" of his eight according to a post-race interview. Between the transmission and engine faults, broadcasters reported Ricciardo as being down as much as 30 kilometers per hour (18 miles per hour) on the straights—a crippling weakness even at Monaco, which put him as much as 10 seconds per lap down on his record-setting 1:10.810 pole time.

Nevertheless, Vettel's power advantage was offset by tire struggles; Ricciardo scampered away in corners, and Vettel surged back on the straights and through the tunnel. Lap after lap, the two played cat-and-mouse, though Vettel endured a dash screen blackout on lap 41.

Verstappen pitted on lap 47 for hypersoft tires, the best weapon available to him to recover more positions. As Max chased the two Renaults, Fernando Alonso pulled off on lap 53, his transmission busted. By the time Verstappen caught the Renaults, Carlos Sainz Jr. and Nico Hülkenberg had switched places to allow the latter to chase Pierre Gasly, whose performance was reminiscent of Toro Rosso-Honda's unprecedented pace in Bahrain. Verstappen's dive into the braking zone after the tunnel on lap 57 was foiled by Sainz cutting the chicane, about which the Dutchman complained over the radio. The following lap, the situation reversed itself, with Max cutting the chicane to pass, and Sainz tattling over the radio.

As the race neared its terminus, Brendon Hartley received a message telling him that his pursuer Charles Leclerc was having problems, and was instructed to hold the fort, just before Leclerc's front right brake failed after the tunnel, sending him into the back of Hartley, who sustained race-ending damage too.

The crash called for a virtual safety car, making Monaco the seventh straight Grand Prix in the 2018 season to see either a safety car or its virtual counterpart, but the condition was rapidly lifted, disappearing on lap 74 as lapped Stoffel Vandoorne exited the pit lane on hypersoft tires, directly between Ricciardo and Vettel, a secondary obstacle, adding further dirty air to Vettel's woes. This allowed Ricciardo to inflate the gap between himself and Vettel, putting to an end Vettel's challenge to his former teammate.

Ricciardo crossed the line to win his seventh Grand Prix, and his first won from pole position, with all previous race wins occurring after starting outside the top three. He described it as "redemption" over team radio, in reference to the 2016 Monaco Grand Prix, in which he lost the lead, thus the win, because of a botched pit stop. For his power-handicapped heroism in Monaco, Ricciardo was voted driver of the day.