MotoAmerica Superbike races at Circuit of the Americas had two winners: Saturday in the wet it was Matthew Scholtz, Sunday in the dry it was Toni Elias. 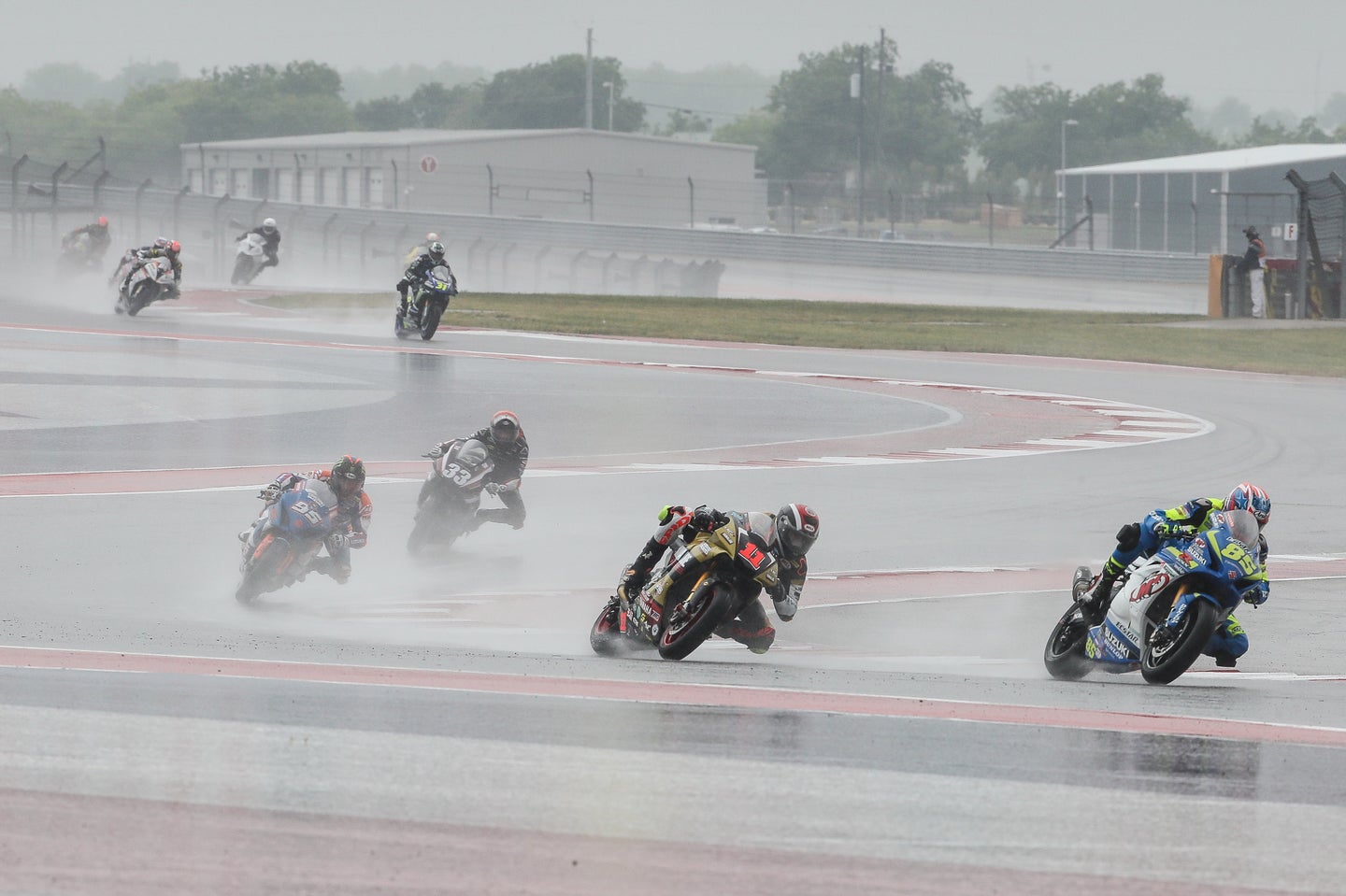 At Circuit of the Americas after a morning and early afternoon of dry conditions during qualifying for the MotoGP classes on Saturday, it was dark and wet for MotoAmerica Superbike Race 1. The wet conditions resulted in a surprising podium with Matthew Scholtz taking the win over all factory riders on his  Yamalube/Westby Racing Yamaha YZF-R1, topping an all-Yamaha podium.

Finishing in second place was Josh Herrin on the Attack Performance/Herrin Compound Yamaha YZF-R1, followed in third by Cameron Beaubier on a Monster Energy/Yamalube/Yamaha Factory Racing YZF-R1, who nabbed third place despite crashing and reentering the race.

The track conditions were far less than desirable and difficult for the riders to gauge. Scholtz suffered a bad start but he ran a pace that was surprisingly about three-seconds a lap faster than nearly the entire rest of the field, completing the first lap in fifth place after passing several competitors. From there, Scholtz ran down Herrin and Beaubier who were battling for the lead, eventually winning by a 12-second margin, with Beaubier crossing the line 51seconds behind the winner after his off-bike adventure.

“The start was terrible for me. I got shuffled back pretty far. I made it past, maybe, four or five guys on the first lap, and I could see that I was catching everyone that was just up the road in front of me. And then, once I got up to third, Josh (Herrin) and Cameron (Beaubier) had a pretty decent gap and I kept on pushing hard," Scholtz said after the race. "I could see that my sector times were getting better. Unfortunately, Cameron crashed, and I focused on catching Josh. There were some sections on the track where he was slightly quicker than me, but in the sections where I was quicker, I was making up massive time. I got up to Josh, and he was protecting his lines, and he was fighting for it. I managed to pass him with about three laps left, and I just put my head down and took the victory. I’ve got to give a big shout-out to the Yamalube/Westby guys. They gave me a faultless bike today,” Scholtz said.

Crew Chief for Yamalube/Westby Racing, Chuck Giachetto, said: “Well what can we say about Mathew Scholtz and the whole Yamalube Westby Racing Team? To say we are thrilled would be an understatement. We are all very proud of Mathew and extremely grateful to the folks at Yamalube, Yamaha and all of our fantastic sponsors. I’d like to forward my congratulations to all the MotoAmerica competitors who do battle at every event on our tour.”

On Sunday, in Race 2 of MotoAmerica Superbike, that was run in dry conditions, Toni Elias, winner of both races a week earlier at Road Atlanta, took the win, which was his fifth at COTA in MotoAmerica Superbike for Yoshimura Suzuki Factory Racing. Two-time series champion, Monster Energy/Yamalube/Yamaha Factory Racing’s Cameron Beaubier, finished second, on his Yamaha YZF-R1, as the only rider visiting the podium on both days. Finishing third on Sunday was Beaubier’s Monster Energy/Yamalube/Yamaha Factory Racing’s teammate Garrett Gerloff.

“Yesterday, I expected a little bit more, especially because the bike was the same as last week where we could fight with Cameron, but yesterday, something was, I didn’t feel comfortable… not good grip," said Elias, a Spanish rider, after the race. "So, our main goal was to gain points. Today, the main goal was win. This is a good track for me, and for our bike, so we try to make some difference today. But, we know it will be tough.”

Heading into the next MotoAmerica event, at Virginia International Raceway, May 4 through May 6, Elias is leading the Superbike Championship with Scholtz second in the points and Beaubier in third.